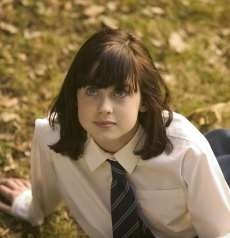 The mid-1990s saw a swathe of Irish coming of age dramas set in the 1950s which frequently (and often quite clumsily) sought to equate the experiences of their young, mainly male protagonists with the emergence of the state from its post civil war “adolescence”. With varying degrees of success, Korea, Broken Harvest, and All Things Bright and Beautiful all ploughed the same furrow. Similar narratives centered around female leads were notably absent, so when a drama like 32A arrives, focusing on four teenage girls as they deal with the impact of puberty and burgeoning sexuality on their relationships with friends, boys, parents and even with themselves, one is immediately inclined to welcome it.

The female lead in Broken Harvest was played by Marian Quinn, a member of the Quinn film dynasty which extends to her three brothers: cinematographer Declan and actors Paul and Aidan. 32A sees her move behind the camera for the first time, working as writer and director (although she also performs a small but critical role as one of the girls’ mothers.) Watching the film the first time, one is immediately struck by the success with which the look and feel of 1970s middle class Dublin suburbia is recreated. Particular kudos go out to the production and art design along with those responsible for set and costumes: one glance at those off-lime green/brown-orange interiors, the blocky facia of a Renault 6 and poured concrete roads and the setting is impossible to mistake. (This notwithstanding the fact that parts of the film were shot in locations as far flung as Sligo in a bid to access regional film funds).

However, the narrative territory of the film is not established as effectively. The film follows two strands: in one, 14-year old Maeve (the wonderfully cast Ailish McCarthy), encounters local Lothario Brian Power (Shane McDaid, a convincing ringer for Tommy-era Roger Daltrey) at a party she shouldn’t be at. Despite the age gap (two years), they hit it off, aided by a lying-on-the-ground-staring-at-the-stars sequence lifted from Bill Forsyth’s Gregory’s Girl. Girl having met boy, the rest of the strand pans out in a predictable fashion: girl falls out with friends over boy, boy drops girl (nicely enough) and girls make up. The reappearance of the estranged father of one of these friends (and equally rapid disappearance) constitutes the film’s only subplot suggesting that even adult relationships are not always straightforward.

If this seems an overly brief narrative summary, it is not because I’m pressed for space: at a narrative level 32A features less incident than that contained in a typical episode of Sex and the City. But while Carrie Bradshaw and her friends used to do all this in 22 minutes, 32A runs on for an hour and a half. As a result, the film meanders. This is not automatically a problem: the success of a film like Steve McQueen’s Hunger derives in large part from the fact it doesn’t wear its narrative on its sleeve: McQueen’s camera adopts an unobtrusive gaze, methodically observing events which rarely feel as though they have been constructed for the camera. Nonetheless in McQueen’s hands the result is an almost unbearably intense and compelling film.

32A has the space to take a somewhat banal skeleton narrative and hang upon it an exploration of what it is (or was) to be a pubescent girl in Ireland. This is potentially rich territory and certainly under-explored in Irish cinema. It is nearly two decades since Margo Harkin’s Hush-A-Bye Baby pulled off the notable feat of simultaneously exploring teenage sexuality and the mores and moral codes of Catholic culture in Ireland north and south.  However, although a number of thematic possibilities are thrown up– teenage sexuality, the unreliability (and even mortality) of parents – 32A fails to explore them in any particular depth. Indeed with the possible exception of Imelda (she of the absent father played here by the barely used Jared Harris), the characters seem remarkably unaffected by their experiences: when Maeve is dumped (Brian having gone off with an older – by two years – “woman”) her response is remarkably stoic and self-contained for what we are given to understand is the end of her first “relationship” (if such a term can be applied to the short-term liaisons characteristic of many teenage romances.) Similarly, when her mother goes into hospital for an unspecified treatment, Maeve’s family seem remarkably unconcerned about her fate. (This is not to suggest that such a visit may not be routine but it does raise questions as to why the medical interlude is included at all: unavailability of Orla FitzGerald who plays the mother during shooting? A device to allow Maeve and her father (a garrulous Aidan Quinn) an extended scene together? )

Indeed, in some respects, the successful recreation of the mise-en-scene of 1970s Dublin is problematic in that it reminds reviewers of a certain age (such as your current writer) not merely of the time and place but recalls how teenagers of that period really behaved. Even accepting that all memories are unreliable it is difficult to reconcile my recollections of teenage discos with the curiously chaste depiction of teenage romance offered by 32A.  The film includes a scene at the famous “Grove” in Raheny (where commitment to verisimilitude includes casting the original DJ as himself). Actually, “notorious” might have been a better word to describe the Grove: although there was much apocrypha about who did what with/to who and exactly “how far” kids went, there seems little doubt that romance at the Grove went beyond the ‘snogging’ depicted in 32A. Yet even if there was only snogging, the film seems reluctant to explore the very real and intense heat and passion generated by teenage lust.

This is all the more problematic because the last decade or so has produced – mainly from the US –something of a revolution in the manner in which teenagers are depicted on screen. Gus Van Sant’s Elephant, or Rian Johnson’s Brick suggest a much more troubled (and troubling) undercurrents amongst contemporary youth. In fairness, both those films feature individuals in extremis and as such it is perhaps unfair to use them as points of comparison for 32A. However, even films driven by far less overtly dramatic narratives such as Larry Park’s work from Kids onwards or Catherine Hardwicke’s Thirteen(surely the most obvious point of comparison for 32A) point to the potential to explore interior lives of infinitely greater complexity than that hinted at in 32A. And as for how it compares with Channel 4’s Skins…

Furthermore, from an anthropological perspective it is fair to acknowledge that there may be very real differences between the mating habits of Irish teenagers in the 1970s and their 21st century US or UK counterparts. Thus there is no requirement that an Irish film in this setting must perforce include full-on representations of teenage sexuality. Nonetheless the insight offered by 32A into how teenage girls really think is ultimately rather banal and unconvincing. The focus on breast size in the opening sequences (from which the film’s title is derived) is repeatedly signalled by the girls’ envious glances at the more amply endowed. But such concerns seem more reminiscent of a Judy Blume novel like Are You There God, It’s Me Margaret than the world conjured by the more recent explorations of teenagedom cited above.

Ultimately then, 32A feels a little unfinished. In fairness, given what must have been particularly complicated financial circumstances surrounding its conception (evidenced by a plethora of references to public funding bodies in the credits) and a short six week shoot, much has been achieved, especially in the visual department, although even here some of the editing decisions feel odd: shots linger on several beats to no great effect. The constraints of the shoot are also evident in some of the performances: though able, the young cast feels under-directed and line readings are often unconvincing. Ultimately, however, as has so often been the case with Irish cinema over the past 15 years, it is the underlying script which is most problematic. This is all the more striking given that its development apparently benefitted from the support of the Moonstone Screenwriters Lab (which has itself recently gone into liquidation despite support from the EU, Scottish Screen and the Irish Film Board). Nonetheless the script as shot still feels several drafts away from completion.