by Silvia Antosa. This text may be archived and redistributed both in electronic form and in hard copy, provided that the author and journal are properly cited and no fee is charged for access. 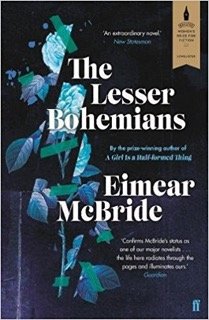 Published a few years after her first successful novel, A Girl is a Half-formed Thing (2013), which immediately gained critical acclaim, The Lesser Bohemians develops in different and innovative ways some of the themes that Irish author Eimear McBride explored in her previous narrative text. Set in 1990s London, the novel is about a 18-year old Irish girl called Eily who moves to the capital city to study drama and performance. London is described in great detail, as a hectic place full of potentiality, idiosyncrasies and inner contradictions that at once anticipate and mirror the expectations of the protagonist. Once there, she meets a much older man, Stephen, a successful actor who becomes her lover and partner. The first part of the narrative is about Eily’s sexual initiation and explores the growing intimacy between the two characters, from their initial sexual encounters to the different, troubling stages which they have to go through in order to get to know each other more deeply and develop a more profound relationship. The detailed account of Eily’s own emotional response to the new dynamism of her life of London and her discovery of the pleasures – and challenges – of sex, is followed by a second section which marks a change in focus. It explores Stephen’s mysterious past, which is gradually unraveled with its psychological and physical trauma, abuse, drugs and negative, self-harming behaviour. In order to start a love relationship, both characters – and especially Stephen – seem to need to confront their personal traumas to be able to encounter each other on a deeper level.

Events are arranged chronologically over a time span which covers a little more than one year, from 12 March 1994 to 21 July 1995. From a generic viewpoint, The Lesser Bohemians is modelled on the form of the Bildungsroman. Events are arranged into a diegetic structure that recalls the novel of formation, or coming-of-age narrative, in which the (originally male) hero’s development requires him to leave both his home and his mother. Finally, after completing his initiation, he is able to return home and embark upon his adult life. From this perspective, the protagonist’s move to London marks the beginning of her journey into adulthood. However McBride seems to make clear that the necessary rite of transition from childhood to womanhood for a young girl has to do with sex and sexual awareness, thus challenging the long-standing taboo concerning female sexuality in relation to the process of “education” of women in literature. The novel is full of passages where Eily enjoys her sexual life, from her loss of virginity to a more disinhibited and creative way of making love to her partner. Love, sex and intimacy are explored and experienced in different ways, with their powerful liberating and empowering potential, as it is clear in the following exemplifying passage:

Belt first. Next his fly. Both now falling back into time where all the past waits outside. It doesn’t matter to me, I say. Then it doesn’t matter tonight, he says, now take off your clothes and show me yourself, I want to remember every freckle when you’re gone. And I. And bra. Kneels down to my breasts. I. Watch his mouth there. Teeth making twitch running right up to my scalp. How he knows me – and all of me – so much. Kiss. Touch. Already damp his. Slip down where he knelt to. Lick. (124)

Many passages are devoted to the lazy pleasures of days and nights spent by the two lovers in Stephen’s room which, far from being a claustrophobic space, becomes a place in which McBride explores a wide spectrum of emotions ranging from excitement to humour, sadness and even an awareness of precariousness, vulnerability and despair. Yet sex is not only a pleasurable experience. In one of her attempts to take a step back from Stephen in a difficult moment of their relationship, Eily has a one-night stand with a relative stranger whom she meets in a pub. What transpires is a painful encounter that leaves psychological as well as physical marks on her body:

Get off that. Why are you being such a fucking bitch? Oh poor you and your soft little dick. Hey, and I am pushed against the wall I can show you a hard dick if that’s want you want. Get off me, I push back. No, him kissing at my neck and Clink through the byre floor, right through my head. Shift spit ert and push from and Get the fuck off! Don’t you fucking claw me, and cigarette Jesus right on my arm. You’re burning you’re fucking burning me! Stop it or I’ll scream and. He steps away I wasn’t doing anything. You burned me. You fucking burned me! (255)

The moment of sexual and physical violence is reminiscent of the powerfully vivid scenes characterizing the theatre of London-based playwright Sarah Kane, whose plays constitute an important intertextual source for McBride’s work. Kane’s brutal performances dealt with sexual desire, pain, physical and psychological trauma, bodily torture and – ultimately – death (see for example Blasted, 1995, Phaedra’s Love, 1996, and Cleansed, 1998). In so doing, Kane articulated female rage by staging the horrors and the consequences of living through a traumatic event, without any form of mediation. Eily’s experience leaves permanent marks on her body, that work as a visible reminder of the gendered power imbalance in violence – and sexual violence in particular.

From the outset of the novel, events are conveyed through the young girl’s perspective, as we follow Eily’s sexual rite of passage into adulthood and are led into exploring her expectations, ambitions and excitement as a young student of drama. In the first section in particular, McBride struggles against the fixity of syntax in order to convey her first-person intradiegetic narrator’s perception, which is articulated through formal incompleteness and half-written sentences. These fragmented and truncated phrases convey Eily’s encounter with a totally new sexual life, with its challenges and up-and-downs, as well as her attempt to give shape to the new experiences that she is living, in an attempt to find a sense of order.

The second part of the novel suddenly changes in focus, theme and style. Eily’s enthusiasm, her expectations and her somewhat naïve overview of the world are first shattered by the episode of sexual violence and then replaced by Stephen’s incredibly dense and traumatic life trajectory that eventually comes out in full force. From a narrative viewpoint, his account is a long-reported monologue, which is followed by his version of a speech by his ex-wife. The different style and tone seem to reflect Stephen’s hard experience of the world, which has been deeply marked by female figures like his mother and his ex-wife. Sexually and physically abused as a child by his own mother, Stephen manages to escape to London to study drama but becomes a drug addict and is incapable of maintaining his relationship with his girlfriend, with whom he has a daughter. Whereas Eily’s voice is marked by incompleteness and fragmentation, Stephen’s monologue is instead syntactically linear, with long sentences and a more traditional narrative frame that conceals a very disturbing and densely traumatic personal life story with which he tries to come to terms. As a post-traumatic subject who has not faced and confronted his own past for too many years, Stephen grapples with an overwhelming narrative that generates an outpouring of emotions. In reliving his trauma for the first time, he seems to want to confront it by putting a self-conscious mental distance from it and trying to rebuild a new life for himself.

In terms of narrative balance, in this final section the novel loses part of its stylistic experimental vitality. The first part of the text is driven by McBride’s brilliant portrayal of the hectic vitality of the London drama scene of the 1990s through the curious eyes of a young Irish girl who is making her own way in the world. In this second section, however, we encounter a more linear and traditional style that seems intended to reflect the age and experience gap between the two characters. In addition, Eily – who up-to-now has been very reflective and talkative – barely makes any comment or expresses herself in interactions with Stephen. It could be suggested that his story might be too traumatic to be interspersed with further comments, especially by a young, inexperienced character who cannot do much more than report his speech. However, it also seems that Eily sits aside and lets us in: as readers, we are asked to suspend our sense of disbelief and listen together with her to a deeply traumatic story that shakes to its roots our certainties about the meaning of life. In this sense, although differently from her previous novel, McBride continues her narrative search for new ways of articulating the so-called unspeakable core of trauma. In my view, McBride’s fiction dramatizes the effects of coming to terms with one’s own traumatic past, and her fiction seems to follow Petar Ramadanovic’s notion of literature as “a form of turning toward a catastrophe, an instinct, and a desire – an attempt to face them in the most radical and immediate way possible” (113). Both A Girl is a Half-formed Thing and The Lesser Bohemians develop innovative ways of giving voice to traumatic experience by engaging with it in different ways and from varied gendered perspectives.

This is a novel that challenges us as readers to find our own interpretative way into the text. We are compelled to follow the characters’ questions and doubts, as well as their exciting happiness that is later mixed with fear, doubt and even violence. McBride is a talented author whose work has the power to challenge us with provocative, intense stories that live with us long after reading and closing the book.