A Changing Subject-Position for Travellers in Knuckle (Ian Palmer, 2011)

A Changing Subject-Position for Travellers in Knuckle (Ian Palmer, 2011) 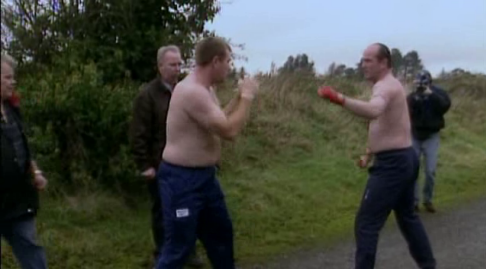 Irish Travellers are an indigenous minority group that have been marginalised and excluded in Irish society (Bancroft 2005: 42-44). Their prominence in moving image production belies their marginal status in Irish society and it can be argued that Travellers have taken on a symbolic role for the general public in Irish culture. Travellers have featured in Irish cinema throughout its history in both indigenous and diasporic productions, such as the British productions No Resting Place (Paul Rotha, 1951) or Snatch (Guy Ritchie, 2000). Travellers in indigenous Irish cinema often signify Ireland’s ‘Other’, denoting an outsider status and issues of exclusion, and at other times creating a microcosm of Irish society through the depiction of Travellers’ rich heritage and tradition under threat. Irish films such as Traveller (Joe Comerford, 1981), Into the West (Mike Newell, 1992) and Trojan Eddie(Gillies MacKinnon, 1996) construct Travellers as romantic figures linked to Ireland’s pre-modern past, representing Ireland’s confused post-colonial identity and indicating an alternative to official discourses of Ireland and Irishness (McLoone 2000: 134-5, Barton 2004: 185-6,  Pettitt 2000: 129, 272).

Ian Palmer’s 2011 documentary Knuckle is interesting because it challenges this subject position of Travellers in Irish film. The film was shot over twelve years as Palmer immersed himself in the “underground” scene of bare-knuckle boxing among a particular Traveller family, the McDonaghs, and the film presents the viewer with an insider view of this secret world.1 However, the Travellers themselves have a different perception of the film and the filmmaker’s relationship to his documentary subjects. According to Palmer (Interview), “they saw it as their film”, a perception repeated throughout the film as they comment on the documentary being made. A fuller understanding of this changing subject position can come from an understanding of the context in which the fights were filmed.

Film and video have been an integral element in Traveller bare-knuckle fights in recent years, since technological developments in film equipment allowed the practice of filming fights to become widespread. Bare-knuckle boxing is part of a Traveller tradition of settling disputes through a system known as “Fair Play”. This system of conflict resolution is important in Traveller communities because of mistrust of the police and of the criminal justice system, which operate within a social order that discriminates against Travellers. In the Fair Play system two opponents, representing both sides of a dispute, settle the disagreement through a structured fight, under strict rules and with the supervision of disinterested third-party referees. The outcome of the fight is binding on all involved, and the dispute is settled in favour of whichever side the victor represents. Usually the disputes are between families, and the fighting is not just about a conflict or dispute, but often a matter of preserving the family’s honour.

Filming serves important functions in the Fair Play system, in that a record of the fight is available so that outcomes cannot be disputed. Videotapes from the early days of filming fights, and latterly DVDs, are watched in groups after a fight has taken place. Usually the family or group involved in the feud are not able to attend the fight, for reasons of security, because of the underground nature of the fighting and because the Fair Play rules don’t allow the group to attend in order to prevent more widespread fighting from developing. The filmed footage of the fight serves as proof that the dispute was settled through the fair fight system. As filming of fights developed, the various groups involved in a dispute would each have their own “video-man” recording the contest. These recordings are watched by all involved and often have a life of their own after the dispute has been settled. They can be viewed as sporting contests and used by fighters as part of their training for a bare-knuckle contest. Film and video footage of fights have thus become commonplace and, in recent years, are increasingly being posted online.

Thus the filmed footage in Knuckle can be viewed as more than simply Palmer’s own filmed footage for his documentary. From the Travellers’ point of view he was the video-man on one particular side of the dispute, usually the McDonagh side, and parts of the film show found footage from other video-men. Palmer didn’t necessarily see his own role as such, but accepts that an exchange took place where the Travellers allowed him access in exchange for the use of his footage in this way, so that he came to be seen within the community as the McDonagh’s video-man (Interview).

In addition to the film footage of the actual fights, challenges to a fight are also filmed and some of these are included in Palmer’s documentary, both as found footage and filmed by him. Filmed challenges can be a part of the bare-knuckle process, in which one member of a family involved in a dispute might challenge a member of the opposing side to fight, through sending him a DVD of the challenge. These are highly stylised performances and all take a broadly similar form, where a challenger will brag about his superiority, list his grievances or accuse the challenged opponent of some misdeed, often calling upon the honour of his family in the process. In many cases a response to the filmed challenge is made where counter claims are made by the potential opponent. Again, filmed challenges are viewed within the Traveller community and are widely available online. It can be argued that this highly innovative use of film within an indigenous community presents not only the use of film as a form of folk memory, but also an interesting insight into alternative uses of film, alternative audiences and alternative approaches, that would be worthy of a more detailed exploration than this review allows.

However, it is important also to acknowledge that the practice of bare-knuckle boxing and the filming of contests or challenges can be a very contentious issue among Traveller groups and organisations, and in the Traveller community, and the response from many Travellers to the film has been negative. At a panel discussion accompanying the release of Knuckle,2 Traveller members of the audience took Palmer to task for his negative portrayal of this community. Individual Travellers and representatives from the Traveller community voiced their concerns at the negative stereotypes being promoted in this documentary, as well as at this film’s contribution to the distortion of the Traveller tradition of Fair Play. Some of those in the audience argued that the culture and tradition of fair fights was not focused on fighting but on fair play, but that media attention has glorified the fighting over other elements, with negative consequences for Travellers and for the practice itself, which has been transformed from a system of conflict resolution to a mere competitive sport through these media interventions. As a Traveller Interagency Report (2011: 5) points out, the traditional fair fight system has recently diminished in its ability to achieve binding results among the community because betting on fights and posting videos of fights on the internet “has altered [the] purpose” of fair fights. Palmer would argue that money is not of real significance in his experience of the contests and that honour and family loyalty remain the primary motivators (Interview). However, it is noteworthy that his film draws attention to an exchange of money on a number of occasions, thus questioning the combatants’ motives for the fight.

The film should be understood in the context of a broader media construction of Irish Travellers. Its release coincided with a burst of negative or exploitative media representations of Travellers in general, both in Ireland and in the UK. This film entered the public realm as a major on-going eviction of Irish Travellers from an unauthorised site at Dale Farm in Essex had been attracting a lot of media attention in the UK and Ireland. It also overlapped with the success of the immensely popular television series Big Fat Gypsy Weddings (Channel 4, UK, 2011), which gained the highest ratings for Channel 4 in recent years and which is now in its second series. Big Fat Gypsy Weddingshas not been well received by either Travellers or by Roma Gypsies in the UK and in Ireland (Bowers 2012). In Ireland television shows such as TV3’s The Truth About Travellers (IRL 2010) also gained high ratings and despite attempting to provide a balanced insight into Travellers’ lives were also arguably somewhat exploitative in their approach. At the same time as representations such as these dominated the media in general, Traveller rights and community organisations have been campaigning to have their status as a distinct ethnic group recognised in Irish law. Such a status would mean that they would be provided by the state with additional resources to ensure their protection, including protection from harmful media representations.  As yet their ethnic status has not been officially recognised by the Irish state, though it is recognised in the UK, and at the UN’s Universal Periodic Review last October, the Irish government indicated that consideration is being given to recognising ethnic minority status for Travellers (Irish Traveller Movement 2011: 1-4). The voyeuristic and exploitative nature of much media attention serves to reinforce the marginality of Travellers as different and “other” without allowing them to be recognised as different enough for equal treatment as an ethnic minority.

Palmer gets around some of the issues of negative stereotyping, of prurient interest or exploitative and voyeuristic representations, by constructing a very subjective and personal account of his own journey over a number of years into what for him was an alien world. By adopting this subjective stance the film questions his almost obsessive interest in the practice of bare-knuckle fighting among Travellers and thus challenges viewers to question their own interest in, and attitudes to, the Travellers who live by those rules. By highlighting the Travellers’ own involvement in filming the fights it also presents viewers with an opportunity to rethink how communities can represent themselves. Knuckle ultimately shows that Travellers have begun this process of self-representation, within their own traditions and their own culture, and in forms that might not be amenable to mainstream consumption without the mediation of filmmakers, from the settled communities, such as Palmer.