by Loreta Goff. This text may be archived and redistributed both in electronic form and in hard copy, provided that the author and journal are properly cited and no fee is charged for access. 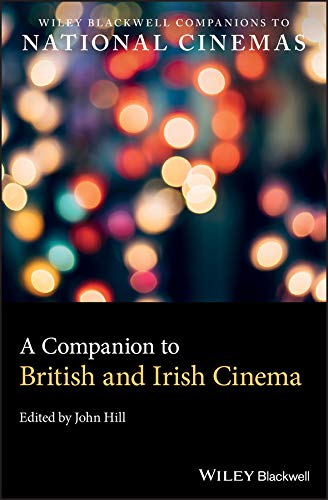 In the introduction to A Companion to British and Irish Cinema, John Hill notes the “upsurge in critical and historical writing” on both cinemas in the last few decades and goes on to situate this companion as one to the studies and interpretations of these cinemas rather than the cinemas themselves (2019: 1-2). As such, the companion, with contributions from leading scholars of British and Irish cinemas, links to larger theoretical debates across cinema studies, in particular regarding national cinemas and transnational influences, while also remaining specific to British and Irish contexts. The focus on metacritically engaging with analyses of these cinemas, examining how these have developed across a range of circumstances and frameworks, is evident across the contributions to this companion, and make it an ideal one for scholars of these disciplines, offering key critical perspectives and charting the development of the field for its readers.

The companion is organised into five parts that bring the reader through the histories of both cinemas to contemporary reconsiderations. Appropriately, a range of methodological approaches are employed – from historical to empirical, aesthetic, theoretical, and sociocultural – both evidencing and interrogating the breadth of perspective and critique encapsulated in the study of British and Irish cinemas over the years. It is important at this point to note the distinction between these two cinemas. While the pairing of the two could be simplified as the result of geographical proximity and positioning as the primary English-language cinemas outside of North America, it is much more nuanced, and this companion captures that. The distinct contexts and qualities of each cinema are given proper attention, along with consideration of the English, Scottish, and Welsh film under the umbrella of British cinema, and the complicated colonial history of England and Ireland which has inevitably influenced the Irish film industry in particular, as elucidated in Kevin Rockett’s contribution to the first part of this companion.

Part one of the companion, “Histories: Issues and Debates” brings the reader from silent cinema to the 1990s and sets up the pairing of British and Irish cinemas, usefully further illuminating one another in comparison. Jon Burrows comprehensively engages, from a contemporary perspective, with film scholarship on British silent film in pre- and post-war contexts which he organises across three periods (1894–1906, 1907–1918, and 1918–1929), noting both underdeveloped areas for future enquiry and methodologies and issues forming paradigms of study. Meanwhile, Kevin Rockett’s contribution on Irish cinema covering the 1890s to the 1930s is framed against Ireland’s anti-colonial struggle, in direct contrast to Britain, necessitating a differentiation of methodological approach. Further distinctions between the two cinemas are reflected in that British cinema is covered through the 1930s, the Second World War, and the 1950s and 1960s with new historical work by Lawrence Napper, James Chapman, and Melanie Williams respectively, who reflect on earlier scholarship through new lenses to deftly re-examine early audience engagement, “Golden Age” wartime cinema and the formation of a national canon, and the periodisation of post-war cinema (here newly tracked through school-set films). In contrast, there is the gap in the coverage of Irish cinema from the 1930s to the 1970s and 1980s, the notable “First Wave” of indigenous filmmaking. Maeve Connolly offers a new approach to these well-trodden decades, arguing that the legacy of the often political and experimental First Wave lies heavily in the development of exhibition practices intersecting with contemporary art, placing value on collective viewing and social architecture. Rounding out the first part, Geoff Eley weaves together the disciplines of history and film to provide a robust argument for film producing history in addition to being situated historically.

Part two, “Debating Film Texts”, offers a range of critical approaches to this debate, including literary adaptation, genre, authorship, stardom, music, international screen culture, and accented cinema. A thread of nationhood continues to weave throughout this part, along with the companion as a whole, again further teased out through the pairing of British and Irish cinemas. Christine Geraghty argues against restrictive considerations of adaptation entwined in the British national cinema’s reputation of literariness associated with the classics, instead calling for an expansion of this analysis allowing “adaptations to generate more open connections” for “creative comparisons” across media (2019: 155). Peter Hutchings goes on to interrogate the Britishness and genericity of British national cinema, illustrating ongoing negotiations between the national and international. Sheldon Hall and Jim Leach, in their respective pieces on authorship and stardom, caution against an over-reliance on national context dulling aesthetic analysis and falling into pitfalls of national myths that do not capture the diversity of the nation. K. J. Donnelly charts the trajectory of British and Irish film music alongside national musical traditions in classical and folk music giving way to pop, making a case for a heritage of film music in its own right. Rounding out this part, Martin McLoone and Luke Gibbons consider Irish cinema’s positioning national and internationally. McLoone examines the role of funding in the development of the Irish (North and South) film industry, both inviting larger-scale projects from abroad and trying to foster an indigenous industry often influenced by a desire to combat dominant outside perspectives of Ireland, largely from Britain and Hollywood. This makes it difficult to pinpoint and define an Irish national cinema, but offers “a perfect example of the local in the global” and the binaries existing within this (2019: 257). Continuing in this line Gibbons uses Naficy’s “accented cinema” to question specificity and locatedness of Irish cinema primarily using the landscape as a mode of enunciation to demonstrate that while we may articulate within Irish film what we know, local or global, multiple articulations exist, grasped in different ways by different audiences.

Part three continues the debate with a focus on “Film Contexts”, particularly in relation to industry, policy, technology, and television. While each of the contributors to this part – Duncan Petrie, Sarah Street, Roderick Flynn, and David Rolinson – focus primarily the scholarship of one or two of these topics, crossover between these elements in the formation and development of the industry nicely link their contributions which inevitably also bear comparisons to the American industry. Striking contrast between British and Irish cinemas, are once again made particularly evident in this part of the companion as highlighted through Flynn’s political economy approach to the Irish film industry which reveals not only its much later development but also the heavy transnational influences and dependencies it faces at a production level. In addition to ongoing questions regarding national considerations, the continued use of the term “film” is questioned in this part, as new technologies and media reshape the industry (Petrie 2019: 294) – something which could perhaps be expanded upon to further consider the implications of ongoing debates about film industries and studies (British, Irish, and beyond) that are tending to expand towards the use of the term “screen” to incorporate additional mediums such as video games and online media.

Part four brings the reader’s attention to “Representation and Identity”, with contributors Niall Richardson, Paul Newland, Debbie Ging, Conn Holohan, Paul Dave, and Sarita Malik tackling broader debates around gender, sexuality, space and place, class, race, and ethnicity through specific lenses. In considering any criticism of this section, I would direct it towards what feels like a slight imbalance and specific lack rather than at any of the chapters, which are of a high quality and tie in nicely to the threads running throughout the companion. Four contributions focus on British cinema and only two on Irish, which do not include a focus on race, ethnicity, or class in Irish cinema, all of which are growing, and perhaps previously underrepresented, areas of scholarship that could have been richly explored and usefully framed in this companion. This is not to say that Ging or Holohan are missing this from their chapters, which offer comprehensive discussion of Irish feminisms, masculinities, sexuality, postcolonial positioning, and framing of the rural and urban, but that the inclusion of another chapter, or chapters, engaging with the representation of Travellers, class divides, and/or methods of representing race amidst Ireland’s increasingly diverse population would have offered a fuller picture of contemporary representation in Irish film. All of these subjects have been covered in Irish films and scholarship, particularly over the last decade, and offer an important area for continued critical engagement. Malik ably demonstrates the need for this with her well-rounded analysis of representations of race and ethnicity in British cinema wherein she notes that “cinema continues as a significant cultural space through which critical race debates around authorship agency, representation, and genre usefully converge” (2019: 457), ultimately calling an approach that brings film and critical race studies together in what might be termed “Critical Race Film theory” (2019: 458).

Concluding the companion, part five, “Redefining ‘British’ and ‘Irish’ Cinema” returns our primary focus towards questioning the national. Importantly, Scottish, Welsh, and English cinemas are distinguished here, capturing the nuances of each both historically and in the contemporary context of Brexit. Julian Petley’s chapter is well-positioned at the beginning of this part as he usefully interrogates the positioning of England within Great Britain, outlining the frequent obfuscation of “English” with “British” and situating more recent conceptualisations of Englishness as linked to a growing nationalism. Following on from this, Jonathan Murray and Daryl Perrins flesh out distinctions in Scottish and Welsh cinema respectively through the lenses of film criticism and defining national cinema in a nation with two languages – an area that might similarly be explored regarding Irish-language cinema. Transnational considerations of Irish and British cinema by Ruth Barton and James F. English draw this companion to a close, reminding the reader that considerations of national specificity of cinema must also recognise the global influences on the nation’s cinema, including the diaspora (Irish-American cinema hyphenating the national) and strategic market positioning as a result of economic competition.

While covering a range of topics and debates central to film studies, A Companion to British and Irish Cinemas remains an extremely cohesive collection, centred around interrogating the protean composition of these national cinemas and research on the same. Inevitably, as is almost always the case with volumes that address such expansive topics, there are some areas that are overlooked. However, not only does Hill’s companion offer a wide-ranging state of the disciplines of British and Irish cinema (past, present, and future), it firmly takes its place amongst the scholarship analysed within it as a volume that is sure to be heavily engaged with by scholars for years to come. While the cost of this companion is likely to be prohibitive to many, particularly students and precarious academics, this does not detract from the excellent range of contributions on offer here which will hopefully be made more readily accessible through University libraries to inspire new scholarship on British and Irish cinemas for years to come.