A History of Irish Women’s Poetry

A History of Irish Women’s Poetry

by Pilar Villar-Argáiz. This text may be archived and redistributed both in electronic form and in hard copy, provided that the author and journal are properly cited and no fee is charged for access. 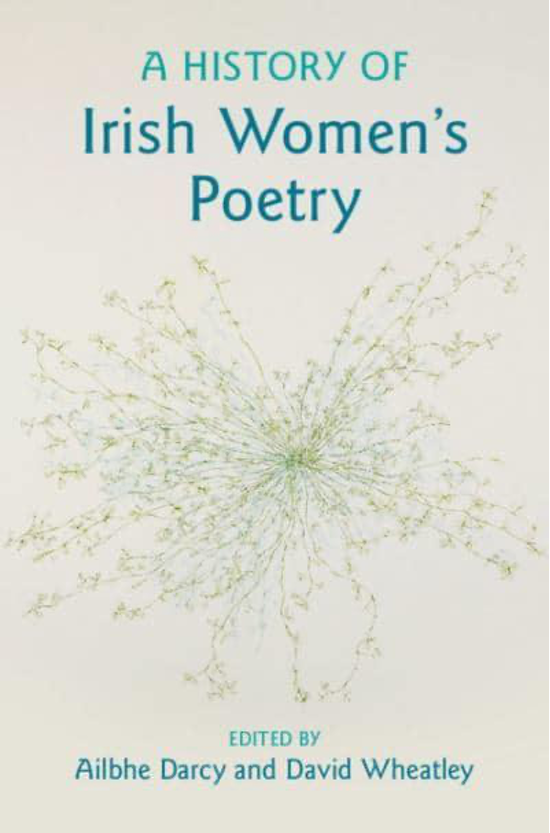 Editing a book which surveys the history of Irish women poets from earliest times to the present day is a challenging task, given the omissions and obscurity of many voices in the past. In the introduction, Ailbhe Darcy and David Wheatley acknowledge with admirable honesty the “incompleteness” of their own “narrative” of women’s poetry, pointing out that the history they try to trace is full of “fragmentation, obscurity, and neglect,” rather than being “linear” and consistent (8). In spite of this, the editors manage, with great efficiency, to depict a literary trajectory which is comprehensive, diverse, and inclusive.

The volume opens with two long introductions, the first by editors Ailbhe Darcy and David Wheatley, and the second one by Anne Fogarty, one of the major voices in criticism of contemporary Irish literature. In their introduction, the editors reclaim the importance and necessity of foremothers in Irish women’s poetry, delineating a literary history of confluences and feedback associations both past and present. Figures like Jane Wilde, who wrote as “Speranza,” for instance, exert tremendous influence on writers such as Eiléan Ní Chuileannain, given the former’s ability to negotiate between feminine and national matters and her effective dealing with the limitations a public role entails. The editors also recognise the eighteenth-century poet Eibhlín Dubh Ní Chomaill (with her iconic poem The Lament for Art O’Leary) as a meaningful precursor for many contemporary poets such as Doireann Ní Ghríofa. In the second introduction to the volume, Anne Fogarty eloquently revises some of the foundational images of the poet as male in the Irish tradition, and makes the polemical claim that Irish women poets are still disregarded “because they have not been read with any enduring regularity and consequently depth” (25). Unlike women poets in other countries such as the United States and the United Kingdom, they have infrequently been admitted to the nineteenth- and twentieth-century canons. Fogarty also offers a concise and illuminating overview of anthologies from the eighteenth century to the present in order to highlight the omission of women poets, and provocatively concludes that there is less space devoted to their presence in twentieth-century anthologies published after the 1960s.

One of the achievements of this volume is the decision to describe the literary scene not only by drawing on well-known major figures but also by including often overlooked or under-researched writers, depicting a cultural panorama of complexity and multiplicity. The effect of this decision is observed in a number of chapters by well-recognised scholars, looking back into Ireland’s poetic past and legitimising the work of women as important foremothers. In chapter 8, Matthew Campbell focuses on the long-eclipsed poetry of Dora Sigerson, a poet from the revolutionary period (and usually thought of as a Revival figure) who is claimed as predecessor for contemporary writers such as Medbh McGuckian. Campbell deftly examines the mixture of the domestic, the political, and the melancholic in her work, concluding that it is necessary “to bring into sharper view an idiosyncratic, distinctly odd, frequently angry, and sometimes plainly depressed poet” (170). Sarah Bennet also draws our attention to poets (i.e., Temple Lane, Kathleen Arnold Price, and Sheila Wingfeld) who have frequently been excluded from literary analysis in post-independence Ireland, given their exclusion from canonical accounts of neo-Revivalist and modernist poetry. Jaclyn Allen’s essay centres on the Other “Northern Renaissance” of the mid-twentieth century. Her analysis challenges the dominant narrative of a predominantly male tradition of writing by incorporating four women poets as case studies: Elizabeth Shane, May Morton, Freda Laughton, and Celia Randall. These writers, as the author demonstrates, anticipate later poets by articulating the challenges involved in intersecting gender aspirations with the hegemonic discourses of poetry and nationhood. Moynagh Sullivan also recovers from history another forgotten name, that of the prolific poet Carla Lanyon, focusing on   aspects of her fifty-two-year publishing career such as her ecological descriptions of the natural world and the influence that the changes in her life exerted on her poetic symbology. Another poet from the same period retrieved from neglect, this time by Daniel Tobin, is Lola Ridge, a poet shaped by the influence of her diasporic experience in the US, resulting in pervasively transnationally inflected work and a non-insular sense of Irish identity.

Overall, the volume follows a chronological approach from medieval Ireland to the present day. Chapter 1 by Máirin Ní Dhomnchadha reviews the difficulties faced by women in medieval Ireland as they tried to find a place of their own as poets. As Ní Dhomnchadha shows, this was a challenging task for women because the canons of Old and Middle English were mainly built by the requirement of specialised training for men. In Chapter 2, Danielle Clarke and Sarah McKibben attentively read questions of form, address, and genre in poetry produced by both Anglophone and Gaelic women in the Early Modern period, highlighting similarities in the way in which they exploit poetic tradition and differences with respect to relationships with hegemonic power. The next chapter by Tríona Ní Shíocháin surveys the richness of Irish-speaking women’s oral traditions during the same period, including songs, laments (caoineadh), vernacular religious verse, and lullabies. Ní Shíocháin gives prominence to the oral performance aspect of such compositions over the written form, arguing that female practitioners had a key role in defying authority, exerting dissent, and exercising power or influence in Irish society. Chapter 4 complicates and deepens the understanding of Irish women’s poetry in the eighteenth century by adopting an archipelagic framework which goes beyond national allegiances and identifies fluid interactivity. Sarah Prescott focuses on women poets not often explored, such as Dorothy Smith, Dorothea DuBois, and Jane Elizabeth Moore, revealing their politically engaged writing and enlarging our knowledge of literary culture in this period. Catherine Jones continues the discussion in the volume, by offering a concise overview of Irish women’s poetry of the Romantic period. Challenging the claim that “there was ‘no Romantic era’ in early nineteenth century Ireland’” (105), this scholar brings to light the work of poets in this revolutionary era, analysing the ways in which it engaged with domestic and political matters. Chapter 6 by Stephen Behrendt deepens this exploration of the Romantic period in Ireland, offering an impressive account of Mary Tighe, arguably the best-remembered poet from this period. The post-Romantic period in modern Ireland is covered by Lucy Collins in Chapter 7, one of the strongest pieces in the volume. Collins argues that the male image (of the soldier, for instance) remains important in the poetic imaginary of Revivalist women poets such as Katherine Tynan or Winifred Letts. Collins reveals the connection between Irish and English literary networks during this period, underscoring ambiguous relations to national affiliations and the strong imaginative appeal these poets find in imagery of motherhood and the Irish landscape.

Four chapters in the collection centre on Irish-language poets over the last seventy years, in order to explore, in words of Daniel Theinová, how they “have responded to the central paradox of Irish as both moribund and undying” (239). While Theinová discusses well-respected writers on the field such as Máire Mhac an tSaoi, Biddy Jenkinson, and Nuala Ní Dhomhnaill and less-studied, but increasingly well-known poets such as Ailbhe Ní Chearbhuigh and Aifric Mac Aodha, Patricia Coughlan dedicates a whole essay to the Irish-language poetry of Mhac an tSaoi, advocating for an increased awareness of the significance of her literary achievement. David Wheatley attends to questions of attachment and belonging in the writings of Jenkinson, while Kenneth Keating addresses the complexities of “linguistic and psychological bilocation” (286) for bilingual poets such as Ní Dhomhnaill, Celia de Fréine, Doireann Ní Ghríofa and Ní Chearbhuigh.

Any historical overview of Irish women’s poetry would be incomplete without considering the legacy and impact that religion has exerted upon the country’s culture. Catriona Clutterbuck examines how Catholic inheritance permeates the work of Irish women poets, allowing them to dramatize the binary tensions between “faith and doubt, collective and individual identity, and sacrifice and self-care” (318), using the figure of renewal to reconfigure the creative potential of this faith tradition. Irish women’s poetry is also read through the prism of feminism and the political contexts in which poetry has been produced and received. Kit Fryatt’s chapter on 1970s-1980s feminism offers an intelligent, scathing critique of Boland in the opening three pages; her discussion of this major poet, although brief, is pioneering in its challenge of this poet’s monolithic view of history at a time when this concept was being vigorously interrogated by academic historiography, and in her apt identification of echoes of a Romantic mode of lyric subjectivity in Boland’s work. The rest of the chapter surveys the work of other major poets, such as Ní Chuillenáin, McGuckian, Meehan, and Rita Ann Higgins in the contexts of feminism and publishing from the 1970s and ’80s.

The following three chapters focus on well-established poets by examining in detail some of their most distinctive themes or motifs. While in chapter 19 Maria Johnson reads a selection of poems by Ní Chuillenáin with ideas of fabrication in mind, Guinn Batten examines Boland’s poetics in her essay, centring on the poet’s relationship with history from the perspective of Hegel’s dialectic. Kathryn Kirpatrick engages with one of the central tenets of Paula Meehan’s work: her interest in expressing in poetic form the lives of the working class, and how other themes emerge through this perspective, such as the rewriting of public and private spaces and the reclamation of an animistic vision.

The last three chapters in the volume cover the work of a younger generation of female poets in the last three decades. In Chapter 22, Tara McEvoy examines formal conservatism, artifice, and appropriation in the poetry of Colette Bryce, Leontia Flynn, Sinéad Morrissey, and Caitríona O’Reilly. In the following chapter Nerys Williams focuses on the opposing tendency observed among some contemporary Irish female poets: the experimental poetics and radical compositional forms of writers such as Susan Howe, Maggie O’Sullivan, and Catherine Walsh. The collection closes with an essay by Anne Mulhall, which examines in comprehensive ways the changing, diverse, and lively atmosphere of the Irish poetic scene nowadays, with the emergence of work by black and minority ethnic poets, radical feminist platforms, and the growth of the spoken word and performance poetry scene.

Overall, this volume demonstrates the importance of challenging the history of marginalisation that for so long almost silenced the work of too many women poets. It both reaffirms and challenges the conception of a clear, straightforward line of development in a tradition of Irish women’s poetry, suggesting a solid trajectory even as it reveals the diverse nature of Irish women’s poetic praxis, while stressing the many gaps, omissions, and absences. The result is a compelling picture of a plural, heterogeneous Irish female voice in poetry from earliest times to the present day, one which shines with a brilliance of its own. Thanks to ground-breaking volumes such as this one, the radiant light of women’s poetry will no longer be extinguished and obscured.