by Gerry Smyth. This text may be archived and redistributed both in electronic form and in hard copy, provided that the author and journal are properly cited and no fee is charged for access. 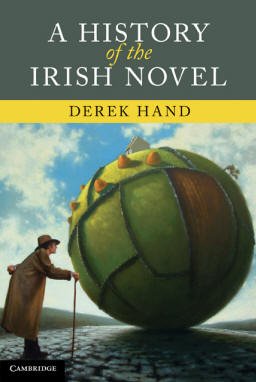 A History of the Irish Novel by Derek Hand

This impressive account of the ‘Irish novel’ arrives at a time of crisis for both the noun and the adjective – which is to say, for both the form which is the study’s subject matter, and for the national tradition in which it is located. It may seem that to say so much is to say not very much at all: every time, apparently, has been a time of crisis for the novel – whether it’s the form’s tentative emergence during the seventeenth and eighteenth centuries, its consolidation as the bourgeois literary form par excellence during the nineteenth century, or the destabilisation of its core constituents during the twentieth century. Despite the discourses of critical regulation and canon formulation which have shadowed its evolution, the novel has always been in a state of ‘chassis’, to some degree. For many commentators, indeed, such a condition accounts in large part for the novel’s power and attraction as a cultural form.

The current threat to the novel represents something else again. For a year or so now, students have been turning up to my seminars with various electronic devices containing downloaded versions of the novels we are supposed to be studying. (You know the brands.) There has been a degree of disruption – for example, when trying to locate a particular passage for discussion, or when discovering that Emily or Tom have actually been social networking rather than focusing on critical issues. Resistance is useless; it’s a trend that’s only likely to increase (what didyou get for Christmas this year?), and it seems clear that both the novel form and its attendant pedagogical practices are going to have to change radically as a consequence. No doubt people will still write and read and write about things called ‘novels’, but the quickening pace of the digital revolution means that everyone is struggling to understand how those practices – ‘writing’, ‘reading’, ‘writing about’ – will evolve in a future that’s already here.

Perhaps the Irish novel is better equipped to handle the current crisis than those produced under the auspices of other national traditions. As Hand argues throughout this attractive book, the Irish novel occupies a unique position within the history of the form in so far as it traditionally operated on the margins of what was itself a marginalised discourse. Its abject cultural condition after the Glorious Revolution rendered Ireland ripe for the development of a cultural practice that was characterised by recalcitrance, partiality and fracture; the Irish novel, it turns out, was Modernist long before Joyce decided to revolutionise the form.

If ‘the novel’ has entered a period of significant crisis, then so too has the qualifying national identity invoked here: ‘Irish’. Every month brings a fresh assault upon that misfortunate descriptor; the speed and the extent of the Republic’s fall from capitalist grace have severely compromised the established languages that we have all, until recently, used to discuss matters ‘Irish’. Then again, that particular word was always, like the novel, a signifier under erasure: the farmer, the stockbroker and the emigrant were all ‘Irish’ in some sense, but the question of both the extent and the essence of any shared identity was always strained, even before the current crises. Again, the parallel with the novel is striking: both the national identity and the cultural form have striven for coherence and legitimacy throughout their careers; both will probably survive, but in ways and in forms that would be unrecognisable to earlier practitioners. The inference is clear: ‘It’s an “Irish novel”, Jim, but …’ – well, you know the rest.

In any event, and all this being so, it was an extremely judicious moment in which to produce an overview of the ‘Irish novel’, and anyone with an interest in contemporary Irish Studies in general, and in the Irish novel in particular, should be grateful that the task fell to someone so well equipped for the task. This is a study long in the researching and the writing, and it certainly shows. Hand’s work progresses by way of a thorough familiarity with both the archive of primary sources as well as the array of critical and theoretical discourses which may be brought to bear upon those sources. (One wonders, by the way, if in the light of recent developments, Lukács – sounfashionable for so long – is due a comeback.) At the same time, it is ‘a’ history rather than ‘the’ history; no sensible academic – especially one who has read Joyce as carefully as Hand – would have the temerity to offer the latter.

The book incorporates a number of ‘interchapters’ – a relatively novel device that I first encountered in Declan Kiberd’s Inventing Ireland(1995). I don’t know if the practice is now more widespread, or what precisely it’s intended to achieve. In Professor Kiberd’s magisterial volume the interchapter functioned as a kind of précis, separated from the ‘real’ book by its rendering in italics, and momentarily zooming out from the main critical narrative in order to offer an overview of the wider situation. In the study under discussion here, the individual interchapters operate rather differently, in as much as they afford the author an opportunity to show off his critical skills by providing an extended analysis of a single text that exemplifies issues explored with greater concision in the preceding chapter. These representative interchapter texts are: Virtue Rewarded; or, the Irish Princess, Castle Rackrent, The Real Charlotte, Ulysses, The Last September, Doctor Copernicus, Reading in the Dark and That They May Face the Rising Sun. There’s your module on the history of the Irish novel already prepared!

This book provides an essential foundation for the study of the Irish novel from the (rough) date of its emergence (Richard Head’s The English Rogue, 1665) to as close to the present as it’s possible to get in this format: Julian Gough’s Jude: Level I (2007). Other studies may be more focused or more nuanced. Fair enough. So far as I understand the matter, however, this text provides precisely what you want from your Academic Press Overview: a critical discourse that is accessible, informative and full of suggestions for further and future research. We await the emergence of the post-Tiger dispensation, in academia as in other walks of Irish life; in the meantime, A History of the Irish Novelshould be essential reading in the field for the foreseeable future.