by Pauric Travers. This text may be archived and redistributed both in electronic form and in hard copy, provided that the author and journal are properly cited and no fee is charged for access. 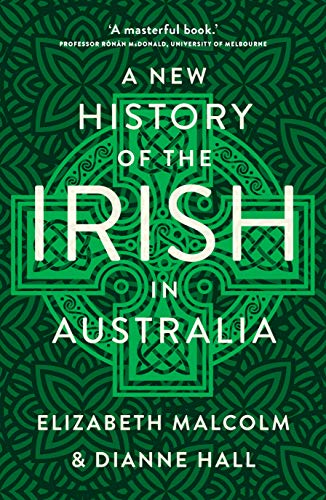 For more than thirty years  Patrick O’Farrell’s magisterial book, The Irish in Australia (1987), has held the position of standard work on the subject. While some of its claims and conclusions have been challenged, it has remained the yardstick by which other work on the subject have been measured. With the recent publication of A New History of the Irish in Australia by leading scholars Elizabeth Malcolm and Dianne Hall,  this looks set to change. Malcolm and Hall’s book is an outstanding contribution to the field of Irish and Irish Australian studies. It complements rather than supercedes O’Farrell’s work while gently refining some of his conclusions. In addition, it throws considerable new light on areas ignored in the earlier work.

In the preface to his book, O’Farrell commented that the Irish in Australia was “an impossible subject, too vast, too various, too complex, and too elusive”. In the meantime, thirty years of scholarship and the availability of new sources has reduced the level of challenge from impossible to merely difficult. Malcolm and Hall take these challenges in their stride by marshalling an admirable range of evidence, approaches and arguments with considerable skill and imagination. The book lacks a central narrative and eschews any aspiration to be comprehensive but the variety of topics covered is impressive and diverse.

Following an interesting introductory chapter on the historiography of the subject, this new look at the history of the Irish in Australia is organised in three thematic sections: race, stereotypes and politics. The section on race includes chapters on the relationship between the Irish and indigenous Australians, the Irish and the Chinese and the controversial question of race, politics and eugenics. The discussion on the Irish relationship with the aboriginal population is fair and even handed. Arguably the Irish were both colonised and colonisers. In some instances, Irish convicts and settlers established positive relationships with indigenous Australians – in others, the story is less edifying. To their credit, Malcolm and Hall do not shy away from the evidence that Irish emigrants and their offspring were involved on both sides in the frontier wars between white settlers and aboriginals.

A central question for historians of Irish emigration is the extent to which the Irish emigrant experience differed from other emigrant groups and the extent to which it was shared. This question is addressed and at least partially answered in this book. By setting their discussion of the Irish in Australia in the context of events in Ireland and the experience of the Irish diaspora elsewhere, the authors clarify issues and events previously imperfectly understood by earlier historians. By including other immigrant groups, they have extended our knowledge and provided fresh insights. The novel discussion of the Irish and Chinese is an excellent case in point. Drawing in part on the burgeoning research on Chinese Australian history, Malcolm and Hall throw new light on parallel experiences of Irish and Chinese immigrants and the shifting relationship between the two groups when the social and economic status of the Irish began to improve.

The Chinese and the Irish suffered from contrasting stereotypes. The stereotypes of Irish women and of Irish men are the subject of two excellent chapters. The discussion is enhanced, as is the book as a whole, by the inclusion of numerous contemporary cartoons which graphically illustrate the normalisation of demeaning racist caricatures which reinforced prejudice in politics and employment particularly in the nineteenth century.

Malcolm and Hall document in more detail than before the extent of “no Irish need apply” advertisements and demonstrate the extent to which they were expressions of stereotyped and gendered anti-Irish attitudes. While the level of discriminatory practices in employment varied over time depending on the wider context, it remains the case throughout the nineteenth and early twentieth century, some employers preferred not to hire Irish Catholics, especially for work in the domestic sphere. It should be said that, as Malcolm and Hall show, the Catholic Irish were not immune from exercising such discrimination against Protestants albeit, because of their social position, they had much less opportunity for doing so.

D.H. Akenson has noted that crime is a theme which runs through the literature on Irish emigration. This reflects contemporary opinion in Australia and elsewhere that the Irish were particularly prone to crime and were disproportionately represented in crime statistics. Historians including Akenson and O’Farrell have accepted this particular stereotype. Drawing on recent research, Malcolm and Hall present a rather different picture – the Irish in Australia were over-represented in public order offences especially drunkenness but not in more serious offences including violent crime.

Similarly they demonstrate the need for scepticism in approaching the vexed question of the Irish and madness. There is no doubt that in Australia, as elsewhere, the Irish were committed to psychiatric institutions in substantial numbers. While they do not reach firm conclusions, Malcolm and Hall point to the complexity of the issues involved and the importance of cultural and contextual factors which demand further research on the Irish asylum experience. This research should include a closer examination of those doing the committals as well as those committed and those doing the diagnosis.  It might also include a focus on the relatively large numbers of Irish female committals.

The final section of the book on politics is the most conventional in approach although the conclusions are notable. The Irish involvement in politics is approached mainly through the lens of Irish Australian premiers and prime ministers. While some historians have celebrated the achievements of prominent Irish Australian politicians, the authors present statistics showing that, in proportion to their numbers, there were fewer such people who reached the summit of politics than might have been expected. They also show the extent to which the careers of leading figures such as John O’Shanassy, Charles Gavan Duffy, Bryan O’Loghlen were blighted by anti Irish prejudice. Given their background and social class, the latter two were not easily caricatured as Irish peasant or tribal chieftains, but that did not spare them from being tarred with the same brush.

Some historians such as the late Eric Richards have questioned the usefulness of categories such as Irish, Scots and Welsh as analytical devices in studying migration and immigration and have argued for a broader taxonomy which transcends but does not deny national components. One taxonomy which Malcolm and Hall consider but reject decisively is the Irish as Anglo-Celtic, a superficially attractive hybrid which obscures key elements of identity and experience. A comparative focus on wider European and global diasporas might offer valuable insights but this New History of the Irish in Australia demonstrates the enduring value of a more specific lens.