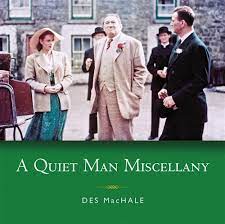 John Ford’s The Quiet Man (1952) is very likely the most written about “Irish” film of all time, and Des McHale may be the film’s most informed fanatic. A Quiet Man Miscellany is McHale’s third book about the film, his first being the highly informed The Complete Guide to the Quiet Man (2000), followed by Picture the Quiet Man (2004). In this latest book he continues his quest to uncover every possible detail about the iconic film and the minutiae of its production during the summer of 1951.

Ford’s Irish-American fantasy, based on the short story by Maurice Walsh, is one of the most important texts within the visual culture of Irish Studies. When Ford made The Quiet Man there was no major film industry on the island of Ireland. The void in international representation from within meant that American cinema was able to frame Ireland – its landscapes, culture and people – and to establish an “idea” of Ireland to its audience that persists to this day. Indeed this image of Ireland “set a template for Ireland’s promotion of itself through tourism” (Crosson 1) and is worth a tidy annual sum to the industries that sell Irishness in the United States (Casey 84-109). This is Ireland, but seen through a romantically idyllic lens in which “its Technicolor vision of a land of rosy cheeked colleens, leprechaun-like intercessionaries and humane clergy united by song, drink and public brawling had little in common with the Ireland of the 1920s in which it is ostensibly set” (Barton 72-3). Ford wasn’t attempting to depict a social reality, “but to recreate a myth” (Curran 79-80). Just as his Westerns significantly influenced a constructed “idea” of America and the Old west, John Ford was able to draw on a series of already established romantic conventions to create an “idea” of Ireland that would be depicted in artistic and touristic imagery for decades to follow. This was an Ireland, as Martin McLoone describes, of “benign utopias of romantic pastoralism” (McLoone 34). To fully understand the importance of The Quiet Man in the study of Irish cinema, one must also understand the cinematic response in Ireland to the imagery it created. From the emergence of sustained indigenous production in the 1970s, The Quiet Man inspired a range of cinematic ripostes to its cartoonish representation of the West of Ireland, from Bob Quinn’s Poitin (1977), the anti-Quiet Man, to Jim Sheridan’s cinematic adaptation of John B. Keane’s The Field (1990).

The sustained focus on The Quiet Man by academics over the last forty years has called into question the notion of what exactly constitutes an Irish film, and how the subject of Irish cinema should be studied. Regardless of what academia thought, the film was voted as the best “Irish” film of all time in a 1996 Irish Times poll (Crosson 2) and the critics Tara Brady and Donald Clarke recently placed the film seventh in their “Top 50 Irish films of all time” (2020). The film has also helped to inspire some of the best academic work in studies of Irish cinema, such as Luke Gibbons’ influential analysis of “Romanticism and Realism in Irish Cinema” (194–257).

The film is also of unique importance because of its relationship with a diasporic Irish identity. In the sleeve McHale points out that the film is a “powerful evocation of nostalgic Ireland and the search for home” (2020), and perhaps we could add, in the case of many Americans, a sense of Irish cultural identity. This nostalgia was key to many of the Irish emigrant fantasies of return made in American cinema, which can be seen in the early Kalem Company films such as The Lad From Old Ireland (1910). Lance Pettitt argues that in fact “the film’s enduring popularity may be explained by […] the way it portrays the romantic reintegration of an Irish émigré” (64). James McKillop describes this as the work of a “third generation (emigrant) return literature” that seeks out an Ireland “lost from family memory” (180). This postmodern nostalgia for a world that never existed in the first place is now an established part of the “tourist gaze” by which Ireland is imagined by others. The restoration of The Quiet Man cottage in Cong, County Mayo as a site of pop cultural pilgrimage shows how cultural heritage becomes theme park via the technicolour prism of 1950s Hollywood cinema.

McHale’s book is a true miscellany, containing an assortment of freshly published information and archival material. Of particular interest is a chapter featuring the letters of Meta Sterne, John Ford’s script supervisor and regular assistant. Sterne was extremely close to Ford, and her letters to her husband Sam Kalish offer the greatest insights into behind the scenes aspects of the production, although Sterne herself seems to have been mainly concerned about the paucity of the local food, “We’ve not had a vegetable hot save potatoes and carrots. I ate some soup and found two pieces of string bean and almost wept” (3).

There are ten short eclectic chapters in total. One makes a brief comparison between the film and its informal cinematic cousin, Only the Lonely (1991), in which Chris Columbus imagined an older version of Maureen O’Hara’s Mary-Kate Danaher in the character of Rose Muldoon. Another chapter focuses on the role of Welsh author Richard Llewellyn in the adaptation of Walsh’s short story to the final shooting script. Llewellyn was not credited (that honour went to Frank Nugent) as Ford deemed his script too political, but much of his influence on the film remained. For example, the names “Inisfree” and “Castletown” were Llewellyn’s ideas (45). Other chapters include sections on the groundbreaking “New Perspectives on the Quiet Man” conference of 2005 held at the Huston School of Film and Digital Media at NUI Galway. Another describes the memories of minor cast member Maureen Coyne (who played old Dan Tobin’s daughter). The final chapter even offers a quiz.

McHale does not come from the academic establishment that usually make it their business to critically analyse films like The Quiet Man; he has had a long career as an academic in mathematical science as an expert on the work of George Boole and has published numerous books of jokes and humour. A Quiet Man Miscellany is therefore atypical with regard to mainstream criticism or analysis but no less valuable in terms of knowledge of the film. This book is not the detailed and sustained critique that one might expect from an academic in the field of film or screen studies, but to assess the book in this manner would miss the point. More than any other film which represents the Irish on screen, The Quiet Man has taken on a life of its own in contemporary popular culture and boasts a large online fan base. McHale’s methodology is in his fanatical obsession with knowledge about the film, and this approach has provided a huge amount of data on the subject. The book features some excellent on set photography and an array of production stills alongside some genuinely interesting facts; at other moments some of the facts and titbits are not quite as revelatory as they set out to be.

MacHale isn’t the first author to write a guidebook to the film. Luke Gibbons wrote a brief critical text on the film (2002), and others have published about the film outside of academia (McNee, 2008; Young, 2012). There have also been informative documentaries which offer similar insights to MacHale’s book. Examples include Se Merry Doyle’s John Ford: Dreaming the Quiet Man (2010), Inisfree This Way (1991), and The Making of the Quiet Man with Leonard Maltin (1992). It could be argued that this profusion of information and reverie about The Quiet Man renders McHale’s third book superfluous, but given the socio-historical importance of the film the book is a welcome addition to the existing corpus of work on the subject.

The Quiet Man Miscellany is a light text aimed at fans of the film, for whom the book will hold great value. In a chapter solely entitled “Miscellany” which lists a series of paragraphs offering even more miscellaneous information from the film, McHale asks “just what level of detail does one have to reach before the typical Quiet Maniac’s insatiable thirst for knowledge about the movie is satisfied?” (95). The answer it seems, is to considerable levels. McHale has a deep understanding of the film and his publications will be useful to any student or researcher who desires to know every possible detail about the film. Ultimately though, A Quiet Man Miscellany may be of most interest to those out there who consider themselves true “Quiet Maniacs”.

Crosson, Sean and Rod Stoneman. The Quiet Man and Beyond: Reflections on a Classic Film, John Ford, and Ireland. Dublin: Liffey Press, 2009.

McNee, Gerry. In the Footsteps of the Quiet Man. Edinburgh: Mainstream Publishing, 2008.