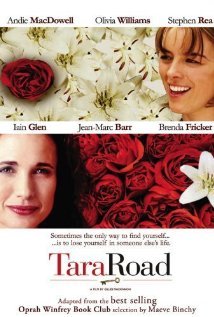 …and God help you if you use voice-over in your work, my friends. God help you. That’s flaccid, sloppy writing. Any idiot can write a voice-over narration to explain the thoughts of a character. (Robert McKee character in Adaptation, 2002)

It would be surprising indeed if literary adaptations were absent from a review of Irish film in 2005 given the ongoing centrality of books – literary and popular – in the cultural life of the nation. John Banville’s Booker Prize and Cecelia Ahern’s film deals1  notwithstanding, there was a surprising paucity of material adapted from page to screen in the last year with the majority of young film-makers favouring original screenplays. This predilection for originality is impressive among a young industry but raises interesting questions about a storytelling heritage.2 Are film-makers now not interested in adapting from previously published materials? Is film development being led by writer/directors rather than creative producers? Is adaptation seen as a soft option, less cinematic and less ‘entrepreneurial’ than the long and hazardous process of script development? Or, more mundanely, is this hiatus more a blip than a tendency?

Two high profile and quite different film adaptations were completed in 2005, encompassing both the literary and popular poles of the Irish publishing world. And tellingly, in a year of limited production, both were produced by experienced figures in Irish cinema.

Producer Noel Pearson, (My Left Foot, The Field, Gold in the Streets) brought together a large cast of well known actors headed by Andie McDowell under the direction of Gillies McKinnon for an adaptation of Maeve Binchy’s bestseller, Tara Road. The presence of Ms Binchy’s name above the title and Ms McDowell’s below squarely placed the film in the marketing tradition of ‘international national cinema’ as practiced by Working Title and other British production companies over the past decade. A headline US actor, a ‘brand-name’ author’s best-seller – already well known and established in the United States3 – and an experienced cast and crew working quickly and efficiently is a particularly conceived kind of cultural product with the producer as cultural alchemist turning the local into global gold. The central plot of the film, a house exchange between the USA and Ireland would seem an almost improbably calculated conceit for such a project (two women struggling to overcome different kinds of trauma – the death of a child and the end of a marriage), allowing for not one but two audiences to find markers of identification and engagement. Who hasn’t, after all, wondered what it would be like to live another life for a while and tinker with the possibility of romance with charming strangers? Maeve Binchy knows her audience, and more importantly from a producer’s point of view, her audience know her.

Tara Road proved to be an attractive proposition to a considerable Irish cinema audience and gave a welcome fillip to a generally lack-luster year at the domestic box-office, where it took an unexceptional but not embarrassing €500,000. The film was unusual in the prominence it gave two female leads (Andie McDowell and Olivia Williams), relegating male characters to the fringes – with the exception of the ‘almost’ affairs. It was refreshing too to see an Irish film appealing to an audience over the now seemingly inviolable threshold of 34. But though the talented actors of Tara Road do a worthy job, the overall feel of the film is of a TV movie. Grief and its transition to recovery are difficult to show convincingly and cinematic style must go someway in evoking the poetic sense of loss that words might achieve on paper. To try to capture this process and all its attendant detail over 90 mins using generally banal and functional methods is difficult, to say the least. The screenwriter, Shane Connaughton (My Left Foot) does a satisfactory job in condensing the very verbal Binchy source down from its door-stopper dimensions, but there are simply too many incidents and characters to allow us be moved, though it would be churlish to deny that we become involved. Although Tara Road is no cinematic milestone (it might have been more interestingly reworked as a TV series), and it fails to match the artistic (and so far, commercial) success of Binchy’s earlier Circle of Friends, it is nonetheless a welcome addition to the range of films that make up a diverse and vibrant national cinema. 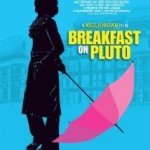 Breakfast on Pluto is an altogether more daring and inspiring reworking of a literary source. Neil Jordan follows his successful return to prose fiction (the acclaimed novel Shade, 2004) with a return to the prose of Pat McCabe with whom he memorably collaborated on The Butcher Boy (the subject of a new monograph by Colin McCabe in the Ireland Into Film series). Breakfast on Pluto, shows similarities to the earlier book/film in tone, themes and feeling but is nonetheless an utterly original work, certainly the most exuberant and inventive Irish film made this year, and possibly any year. Proving the lie to McKee’s dictate on voice-over as ‘flaccid’ the story tells the sad tale of Patrick ‘Kitten’ Murphy (in a captivating – and Golden Globe nominated performance – by Cillian Murphy), a boy conceived during a tryst between the local Parish Priest (Liam Neeson putting an ironic twist on his long list of recent father-figure roles) and his house-keeper (Eva Birthistle).

Kitten is adopted after his mother abandons him – it’s the late 1950s and illegitimate children would be automatically taken from their mothers – and brought up in a traditional household, which his colourful personality – and cross dressing – soon outgrows. Kitten has no time for ‘serious, serious, serious’ and leaves in search of glamour and romance. His subsequent travels include spells as a Pocahontas inspired singer in Billy Rock’s showband  (Gavin Friday – to whom McCabe dedicated the original novel) until he is chased out of Ireland by the IRA, followed by spells as a ‘Womble’, a Magician’s assistant, a peep-show entertainer, a late and poignant reconciliation with his father, and finally a happy return to London as a surrogate mother. It is a vertiginous and episodic tale; high-camp picaresque set against a backdrop of rising IRA violence, sexual revolution and social change spanning the 1960s and early 1970s.

This is a collaboration of the highest order; a playful and inspiring meeting of imaginations. Pat McCabe’s fecund and wildly eccentric source material is bent to thematic concerns recognisable from elsewhere in Jordan’s work – emotional vulnerability and the sleazy sex-for-sale demimonde of Mona Lisa, the sexual and political border-crossings, as well as the political backdrop of the Northern Irish conflict found in The Crying Game, and familiar issues of faith, guilt, transformation and the mutability of the subject, among others. Indeed, it is difficult to see where one author leaves off and the other begins – though there are identifiable changes from the novel and the visualisation of character and settings are all Jordan’s own. Thus we see the director’s common fascination with the glitter world of bars and clubs and the bracing air of the seaside. There is no other director who has shown such a sustained interest in placing Irish characters in England – particularly London and Brighton. The night and day worlds of nightclub acts and out of season holiday resorts frequently lend Jordan’s films a sad and sometimes tawdry air, but such tendencies are avoided here by the contrapuntal pace of the story, the rich cast of supporting actors, Cillian Murphy’s defiantly ironic, jaunty and credible performance and an extensive soundtrack of period pop which all combine to deflect from the undeniably serious themes of the story to reach an emotionally uplifting conclusion. WhileBreakfast on Pluto confirms rather than develops themes and interests present in earlier Jordan films it does so with élan, daring and great film-making fluency, and confirms his status as the most gifted and original Irish film-maker at work today.