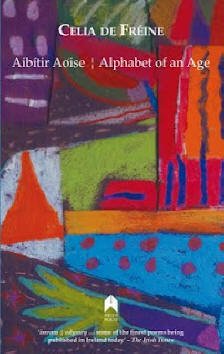 Aibítir Aoise: Alphabet of an Age by Celia de Fréine

Aibítir Aoise: Alphabet of an Age is Celia de Fréine’s fifth poetry collection. Her first two poetry books, Faoi Chabáistí is Ríonacha (Cló Iar-Chonnachta, 2001) and Fiacha Fola (Cló Iar-Chonnachta, 2004) were published in Irish; her third collection Scarecrows at Newtownards(Scotus Press 2005) was written in English; her fourth and fifth poetry books, imram:odyssey (Arlen House 2010) and her latest collection here reviewed,  have come out in bilingual editions with English translations by the poet herself. In fact, one could argue that these English versions are not really translations of a source Irish text and that this kind of edition challenges deep-rooted notions about originals and translations. The advantage of these dual-language editions for the international dissemination of the writer’s work is unquestionable. On the one hand, the Irish version gets the visibility it deserves: those of us who regrettably have no command of Irish become fascinated with the radical difference of this language, try to decipher the meanings encrypted in Gaelic and engage in the exciting adventure of learning a new code, while, on the other hand, the English version reaches a wider readership. Bilingual editions may then turn out to be a productive strategy for the survival of poetry in minoritised languages, although there remains the risk of the bear hug and some may feel apprehensive about the encroachment of English on Irish-language literature.

Celia de Fréine, a doyenne of Irish letters, is a widely awarded poet, playwright, screenwriter and librettist. If for her 2010 poem sequenceimram: odyssey she sought inspiration in Imram —an Irish literary composition which recounts a voyage to another world— for Aibítir Aoise: Alphabet of an Age, she has turned to a Polish genre, the Alphabet Book, about one’s life-time observations. The alphabet form also provides the structure of the collection, as the poems are set in the order of the traditional eighteen-letter Irish alphabet. This repertoire of poems has a round structure, as it begins and ends with a similar concern with writers’ aspirations. Thus, the collection opens with the title poem, where the lyrical voice presents her writing project: “Answers will outlive me / only if I ransack / that pocket of time, // claw out its secrets, / sift them into letters / to fashion into words” (15). The last poem “Uaireadóir”: “Watch” takes satisfaction in the achievement of this project and in its particular joust with time: “Now that I’ve ransacked that pocket of time, / my watch lies silent in a drawer, / the span between seed and sickle contracts. // I read over what I’ve done, / open the shutters / and let in the morning light” (103).

Metapoetic considerations abound in this collection. Sometimes, as in “Ár nDán Féin”: “A Fate of Our Own”, poetry is construed as a protective realm of pleasurable and playful creativity: “[…] you’ll want to scurry for shelter / to the poem-house so that / we can lie on a futon of words // swap the most pithy of metaphors / ‘til multifarious letters escape […]” (31). On other occasions, the poetic voice struggles with her audience’s expectations and with the challenge of verbalising an unspeakable past: “Who are we to bear witness / when we can do only what is asked of us?” (49). “Roghanna?”: “Choices?” elaborates on the tensions between originality and intertextuality, on language as a communal construction and on our unconscious absorption of other writers’ idiom: “[…] When I lift my pen to write / how much of what I say is mine and mine alone?” (91).

In line with her concern with artistic influence and collaboration, Celia de Fréine often acknowledges, in epigraphs to her poems, the work of fellow writers, artists and friends from Ireland and abroad: Caitlín Maude, Fidelma Ní Ghallchobhair, Phyl Herbert, Éilís Ní Dhuibhne, Françoise Connolly, Antonella Anedda, Biju Viswanath, Dora Boneva, Lyubomir Levchev, Josefina Plá, Shi Tao and Xohana Torres. Regarding the last two writers, de Fréine provides us with her Irish and English translations of their poems. Translation, often defined in negative terms as betrayal —traduttore, traditore— and loss, becomes, in de Fréine’s hand, the most apt instrument to pay homage and show complicity with a writer’s work. Her Irish rendering of a poem by Shi Tao, “Meitheamh”, was first written for the PEN Poem Relay to protest against the Chinese Government’s imprisonment of Shi Tao. De Fréine’s Irish and English recreations of “Penelope”, a poem by Xohana Torres, pay tribute to one of the most influential poems in Galician literature.1 Xohana Torres’ Penelope, tired of waiting for Ulysses’ return, decides that she also wants to sail. Her unconventional cry “TO SAIL  I TOO” became a feminist vindication in the Galicia of the 1990s and signalled women’s determination to fully participate in the public sphere.

Irish myth and folklore necessarily inform a number of poems in the collection, as is the case with “Derbforghail”, about the Wife of Lughaidh, “one of the first immigrants to this country” (33). This poem delves into the predicament of the female foreigner, who is envied, despised and challenged by the women in her adopted community. The story unfolds in sober style, with scarce but eloquent modifiers (“your ice-hair”, “your arctic pelt”, “the temperate air”), with balanced stanzas and no abrupt line breaks, all together contributing to a captivating narrative flow. De Fréine’s bardic stance also inspires her critique of contemporary political and economic corruption in “Huth Ná Hath”: “Here Nor There”, where the humorous tone adds to the subversive and irreverent outcry.

Aibítir Aoise : Alphabet of an Age succeeds in distilling the life secrets that time has masked and does so with verse that proceeds with mature poise. Past and present, legend and fact, craft and intuition inform each other effectively achieving “a balance between one order and the other” (21).

This review has been written in the context of the research project, funded by the Spanish Ministry of Science and Innovation (FFI2009-08475/FILO) and by the Galician government (INCITE09-204127PR), for the study of contemporary Irish and Galician women writers.