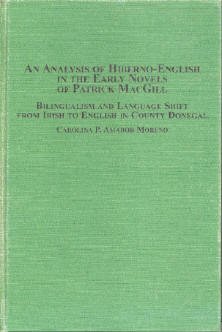 Amador Moreno, Carolina P. 2006. An Analysis of Hiberno-English in the Early Novels of Patrick MacGill. Bilingualism and Language Shift from Irish to English in County Donegal.

If every year in this section there is a work of remarkable erudition, the 2006 title corresponds to Carolina Amador Moreno’s study. The author is a Spanish scholar who teaches Hiberno-English at the School of English and Drama at the UCD and who has chosen as corpus for her linguistic analysis the first books of Donegal writer Patrick MacGill (1891-1963), because of the special characteristics that these texts offer. MacGill was almost uneducated; before becoming famous for his harsh depiction of the life of labourers, he had been a farm-worker  in   his  native  land  and seasonal labourer and navvy in Scotland. His first two novels, Children of the Dead End (1914) and The Rat Pit (1915) became best-sellers in their time, despite their weakness of style and lack of narrative structure.

But the «navvy writer» had an acute linguistic awareness which compensated for his lack of formal education and, according to Amador Moreno, his novels provide an accurate record of his characters’ speech. This is particularly relevant for the study of Hiberno-English; first of all, because there are hardly any data on Northern Hiberno-English before 1951; and secondly, because MacGill grew up in a bilingual area in a key period (beginning of the 20th century) in the process of language shift. His early novels, therefore, become valuable documents to study the situation of bilingualism current in Donegal at the time.

Amador Moreno does not avoid thorny issues, that is, these are works of fiction, so should the speech of the characters be taken as faithful representations of real speakers? Amador Moreno studies the problem in detail and confirms the exceptional features of MacGill’s writing: «…the language that we find both in the narration and in the dialogues of these two novels, should perhaps not be taken as pure, well-planned fiction, strictly, but as a way of rendering the form of language that an uneducated person, with no literary background, no experience as a novelist as Patrick MacGill, resolved to explore» (40).

The systematic and methodical arrangement of this study sends the reader back to a previous academic dissertation of Amador Moreno; there is a disciplined sweep of all the aspects concerning the research, the command of bibliographic sources is impressive and the extensive consultation of specialized dictionaries confirms her deep knowledge on the subject. In short, this is a noteworthy study of high academic merit.