by Karen Marguerite Moloney. This text may be archived and redistributed both in electronic form and in hard copy, provided that the author and journal are properly cited and no fee is charged for access. 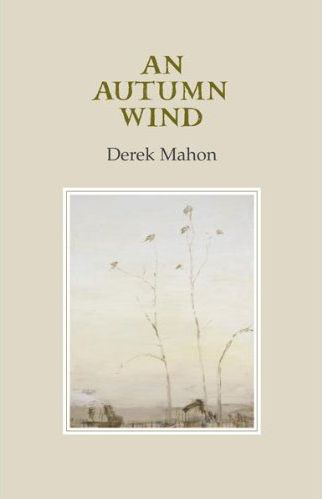 An Autumn Wind by Derek Mahon

The title for Derek Mahon’s latest volume of verse comes from lines in two of its poems. In “Under the Volcanoes,” Mahon ends a holiday on the Spanish island of Lanzarote with a sense of “old age starting for real.” Then, on returning home to Kinsale, he hears “an autumn wind / shaking the window.” The noise disturbs his writing, but he perseveres nonetheless, aiming to produce “a living thing / outlasting winter to a temperate spring.” Mahon’s second poem to contain the title phrase is “Autumn Fields,” his translation of eight-century Tu Fu’s reverie on the rewards he finds in exile:

but peace of mind resides in ferns, flowers,

music and daily habit for equilibrium,

In the poem’s last stanza, the aging Tu Fu observes that the eagles he once intended “to shine among” have been replaced by ducks and geese. Thirteen centuries later, however, Tu Fu’s wistful poem still reels us in, and Mahon’s wry-toned translation plays no small part in that process.  Like the poetry of Tu Fu, Mahon’s new collection of autumnal verse should outlast the winter. I might even call my review “Shining among Eagles” if titling it were an option.

The book’s forty-two poems are presented in three sections. Part One, the longest with its twenty-four poems, is also the most thematically varied, considering topics ranging from “World Trade Talks” to “Ash and Aspen.” Part Two of the collection, River of Stars, contains seven translations of T’ang-era poems, three by Li Po, one by Ch’iu Wei, and three, including “Autumn Fields,” by Tu Fu. Part Three, Raw Material, groups twelve poems Mahon “translated freely” from a collection of the same name by fictitious Indian poet Gopal Singh. Reviewer Patrick Guinness cites Part Two and Three as Mahon’s strongest, a puzzling assessment to my mind. The poems of Part One are certainly as arresting as those by the poet as translator, even as make-believe translator, and all three sections of the volume collect graceful, compelling verse.

Part One opens with “Ithaca,” in which Odysseus returns to his native land and vows to bring gifts to Athene if she will let him “live to taste / the joys of home.” Though the poems go on to chronicle life in places as diverse as Manhattan (“Blueprint”), “old Delhi after dark” (“Air India”), and Lanzarote, Mahon’s “A Quiet Spot” evokes the homely appeals of Kinsale, the “dozy seaside town” where he has retired, the “New Space” of a quiet studio (“a still life restored / to living matter”), and “a knuckly oak beside the spring / reaching skyward like a Druid” (“Growth”). Like Odysseus, Mahon relishes the domestic and indigenous.

In two of my favorite poems in the collection, Mahon muses on topics related toSceilig Mhichíl, the rocky Atlantic outcrop finally abandoned by Irish monks after inhabiting it for six hundred years. Prevented by rough seas from sailing to the island, Mahon speculates in “At the Butler Arms” on the hardships and “intense belief” of the monks who made it their home. He follows with “Sceilig Bay,” a dramatic monologue in which in which Tomás Rua Ó Súilleabháin, nineteenth-century composer from south Kerry, recounts the tale of another failed trip to Sceilig Mhichíl:

Our seine-boat was a delight that morning,

high in the waves, six oars at work,

the sail full and the rowlocks slick,

every board alive and singing.

But when Ó Súilleabháin’s party reached open sea, “breakers multiplied, / rain threatened,” and “Gull Sound / roared aloud like a bull in pain.” Luckily, they made it back to harbor, with Ó Súilleabháin again praising the vessel:

where would you find a finer ship

to deliver you safe from such a storm?

In a less dramatic offering, the three-part “Autumn Skies” also renders tribute, this time to Mahon’s fellow Ulster poets John Montague, Seamus Heaney, and Michael Longley.  In these poems, written for his friends’ birthdays, Mahon manages fine-tuned, knowing assessments of their oeuvres in succinct five- or six-stanza commentary.  In “Art and Reality,” a longer, more free-ranging elegy addressed to James Simmons, poet, songwriter, and founder of The Honest Ulsterman, Mahon recognizes the reality of Simmons’ “dodgy sexual ethic” at the same time that he commemorates his art: “I still hum your songs.”

Part Two’s seven translations from the Chinese are a more tightly connected group than the poems of Part One. Whether transporting the reader back 1,400 years to mountainous regions where “Even cranes find it hard to come . . . ” or to the capital of the T’ang empire, the poems form a moving meditation on longing, friendship, and the loneliness of exile. In “Thinking of Li Po,” for example, Tu Fu reflects on Li Po’s “harsh banishment / among the malarial swamps beyond Kiang-nan,” recalls the companionship he shared with the older poet, and “summon[s] up [his] spirit.”

Part Three sends us back to the present, to the contemporary India of an imagined Hindi poet, terrain that includes not only slums filled with “forests of billboards” (“A Child of the Forest”) but also fields become “bright gardens of winged dreams” after a rain storm (“A New Earth”). Themes of recycling and reincarnation intersect in “Raw Material (“Only material forms die / says theGita”) and “Recycling Song” (“Swords into ploughshares, us / to birds and bushes, everyone / to topsoil in the end), while “Up at the Palace” challenges any “curse of karma” projected onto low-caste children:

People, the terrible things you must have done

when you were soldiers of fortune, local kings

or naughty nautch girls in the old days!

Did you crush pearls for aphrodisiacs,

poison your cousins for a shaky throne

or cripple your tenants with a punitive tax?

As genuine translations, such work would represent a fine accomplishment; as original poems, spoken in the “distinctive voice” Mahon attributes to Singh but is in fact his own, they only ratchet up our level of delight.

Crisscrossing the collection and knitting together its parts are the aforementioned motifs of exile, recycling, and growing older. But perhaps the most frequent common denominator is Mahon’s invocation of water, and in a rich variety of guises. We read of torrential rain in “The Thunder Shower,” “Asphalt Roads,” and “A New Earth”; submerged Munster farmland in “After the Storm”; the breeze-blown Yangtse in “Thinking of Li Po”; low tide in “Mark Rothko”; a tsunami’s “cliff of water” in “The Great Wave” – even a “slowly dripping tap” in “Air India.” A long list – but not a comprehensive catalogue of the volume’s water imagery.  We should expect no less from a poet who retired to a seaside town intent on observing the ordinary wonders that surround him (or that he can conjure up for us in ancient China and contemporary India). After all, in the imagined words of Gopal Singh,

the old gods live on –

not on the high peaks

on water and a washerwoman

sings to her own reflection. (“Water”)

Probably my favorite poem, if not the volume’s finest, relies on yet another link to water with its “league upon league / of ocean” traveled by the “Beached Whale” dying “on the strand at Timoleague”:

The transatlantic dash was nothing to her,

a fine finback, her notion of a trip

the dive at dusk through the empyrean

whooping and chuckling in her slick and drip,

stinking and scooping up the fry,

It’s the diction, alliteration, slant and exact rhyme, rhythm, pacing, and, over and beyond Mahon’s technical control, the glorious deployment of imagination that had me underlining and writing “wow” in the poem’s margin.

Mahon is clearly a poet, like the autumnal Yangtse River of Tu Fu’s poems, “in full spate,” one determined as well to celebrate, with the gratitude of a traveler returned home at long last, “the venerable ideal / of spirit lodged within the real” (“New Space”). An Autumn Wind is Mahon’s fourth volume of verse in the space of five years.  I anticipate with eagerness more volumes from a poet savoring a home “alive to season, wind and tide” (“A Quiet Spot”).