An Introduction to Irish English

An Introduction to Irish English 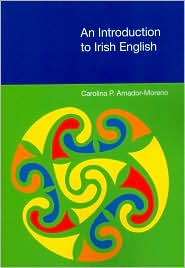 An Introduction to Irish English.

As the author makes clear in the introduction, a book of this sort must be able to reconcile two conflicting aims: the discussion of technical issues without alienating a more general reader. Amador faces and solves happily the challenge of striking a balance between theory and practical examples taken from  real conversations and  literary works, without forgetting — in her own words — “my own research,  experience, thinking and lecturing”. The book is written with an aim at interactive reading and invites the reader “to clarify your own thinking, explore, reflect upon your own perception”. The author succeeds in combining both her experience and expertise as a researcher and a teacher, the result being a wide ranging and well structured publication that can be read at different levels and in a different order, written with an engaging style.  The variety of the material it covers has been produced by  Amador’s own teaching  and the activities proposed come out from seminar-based discussions and exercises. An additional value of the book is the usefulness of its activities in the context of English Language Teaching (ELT), as they can be adapted and turned into language teaching material.

The book consists of 9 chapters, all of them including a perfect balance of theory and practice and divided into the following sections:  a theoretical introduction of a topic, activities related to it, a summary, a further reading section and some answers to the activities proposed.

Chapter 1 is devoted to Some Key Notion: Accent Dialect and Variety,  with special attention to Irish English, Hiberno English,  Anglo Irish  and  the North — South division. Examples cover a wide range, from Walshe’sTrainspotting  to passages from The Irish Times.

Chapter 2 focuses on The History of the English Language in Ireland and analyses the historical development of English since the arrival of the Anglo Normans, the linguistic consequences of the Plantations,  the decline of Irish at the turn of the twentieth century  and the influence of Irish English in the United States, Canada and  Argentina. As a sample of the activities, there is an invitation to read and discuss Brian Friel’s Translations or Douglas Hyde’s speech On the Necessity for De-Anglicizing  Ireland.

Chapter 3 analyses The Grammar of Irish English, covering the noun phrase, the verb phrase, prepositions, focus and subordination. It includes tests on examples from real conversations as well as from written sources such as newspapers, e-mails, or Irish literature. Attention has mostly been drawn to the usage of these IrE (Irish English) examples by comparing them to their equivalent in the StE (Standard English) variety.

Chaper 4 is entitled The Vocabulary of Irish English and there the author avoids a mere listing of words, choosing instead a selection of the most representative in order to illustrate the features of IrE Lexicon. Influences from Irish Gaelic, or archaic and dialectal English origins are examined, as well as other lexical items proper to Irish English belonging to a variety of semantic fields.  Activities range from a discussion of words like brogues, gallowses, gasair, or very humoristic examples playing with words, to a passage from A Portrait of the Artist as a Young Man or the meaningfulness of the word crack.

Chapter 5 concentrates on The Sounds of Irish English and the complexity of the phonetics and the phonology of IrE.  Special attention is given to Dublin English  as well as to  the North,  including activities from a passage from Anthony Trollope’s An Eye for an Eye to excerpts from the Curious Incident of the Dog in the Nightdress.

Chaper 6 deals with Fictional Representation of Irish English, covering a wide range of topics such as “Perceptions of the Irish: Stereotypes and the Brogue”, “The Irish Character from the Elizabethan Period to the Eighteenth century”, “From Fascination to Nationalistic Aspiration” and “The New Ireland in Fiction”. The striking variety of examples covers quotations from Shakespeare, Sommerville and Ross, J.M. Synge, Samuel Beckett, Joseph O’Connor, Brian Friel, Marina Carr, Paula Meehan, Paul Durcan, Roddy Doyle or Frank MacGuinness, as well as television drama,  advertising  and films.

Chapter 7 focuses on Meaning What They Say: the Pragmatics of Irish English and  includes  sections on “Pragmatic and Irish Politeness”, “Avoidance of Directness in Irish English”,  “Pragmatic Markers”, “Small Talk, Listenership and Social Interaction”  and  “the Pragmatics of be+after+V-ing”. Activities are based on examples from Patrick MacGill’s The Rat Pit or Alexander McCall Smith’s Portuguese Irregular Verbs.

Chapter 8, Searching Corpora for Data, raises the question What is a corpus? from the very beginning, followed by a discussion on the use of corpora to investigate Irish English and ending up asking What can corpus analysis tell us about Irish English?

Finally chapter 9 focuses on Implications for English as a Foreign Language: Teachers and Learners. Different issues are discussed, such as “Irish English and the Teaching of English as a Foreign Language”, “learning and understanding English in Ireland” or “Exploring Irish English in Context”. The author points out that this is mainly addressed to students who are based in or are planning to learn English in Ireland and for teachers who want to include IrE in their syllabus.

In summary, Amador has provided us with an excellent contribution, both scholarly and didactic at the same time that must be recommended not only for those who want to enlarge their linguistic scope but for everybody interested in real and alive Ireland. Only as an example of the many relaxing ways she proposes to approach and understand the complexity of Irishness, we reproduce the following joke:

Question: What do you call an Irish philosopher?