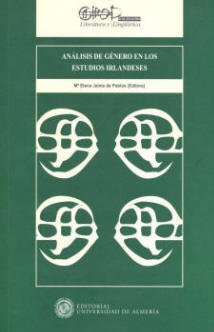 Elena Jaime has edited a collection of articles which centre around Irish literature and culture from a gender studies perspective. This is a difficult book to speak about because I was invited to present an article and I am therefore an interested part and of course favourably biased. I will then merely expose the contents of what I consider to be relevant contributions to the stimulating field of Feminist and Gender Studies.

In the first essay María Amor Barros del Río compares the masculine bildungsroman with its feminine counterpart, the latter being a literary mode which has developed enormously in Ireland in the second half of the 20th century. Some representative novels by Kate O’Brien, Edna O’Brien, Éilís Ní Dhuibhne, Kate Cruise and Moya Roddy are chosen by Amor Barros to show the new tendencies in the Irish bildungsroman written by women.

In the second article Silvia Díez Fabre focuses on Somerville and Ross’s famous narrativeThe Real Charlotte (1894). Hers is an analysis of the main character of the novel, which has normally been described as a monster-woman (an immoral arriviste). However, Charlotte is also revealed as a woman who acts contrary to the passive stereotype of the Victorian “Angel in the house” and who rebels against the patriarchal structures of Irish society.

In the third chapter I write on masculinity and power in Bernard Mac Laverty’s novels and in the fourth chapter Asier Altuna analyzes  gender representations in the female characters of two theatre plays which evoke a Spanish atmosphere, Spanish Patriots a Thousand Years Ago (1812) by Henry Brereton Code and The Rose of Arragon (1842) by James Sheridan Knowles.

Next, Keith Gregor makes a revision of the impact of contemporary theatre plays written by women in Northern Ireland. In the sixth chapter the editor of the volume provides a close scrutiny of Nora Glynn, a female character in George Moore’s The Lake (1905), using as a theoretical frame the joined concepts of woman and nature in the dynamic sense that Moore understood them to be.

Roddy Doyle’s powerful novel The Woman Who Walked into Doors (1996) is the subject of the seventh chapter, written by Marisol Morales Ladrón. The novel is a condemnation of domestic violence written in the first person by a woman who tries to put her thoughts in order and explain herself. Morales Ladrón examines Doyle’s mordant satire of the institutions which allow the exertion of masculinist violence upon women.

Inés Praga Terente considers the echoes of García Lorca’s La casa de Bernarda Alba (1936) in Brian Friel’s Dancing at Lughnasa (1990). There are many points in common in the argument and in the historical contexts recreated in both plays, despite belonging to different cultural traditions. The representation of women locked at home and oppressed by an iron-strong sexual morality truly reflect the real experiences lived by women in Ireland and Spain for decades.

In the final chapter Patricia Trainor pays attention to the fascinating figure of Maud Gonne, the “Irish Joan of Arch”, who fought all her life for the independence of Ireland with articles, lectures and in her activity with regard to Irish political prisoners. Trainor also provides an account of Gonne’s troubled relationship with W. B. Yeats.