by Kathleen A. Heininge. This text may be archived and redistributed both in electronic form and in hard copy, provided that the author and journal are properly cited and no fee is charged for access. 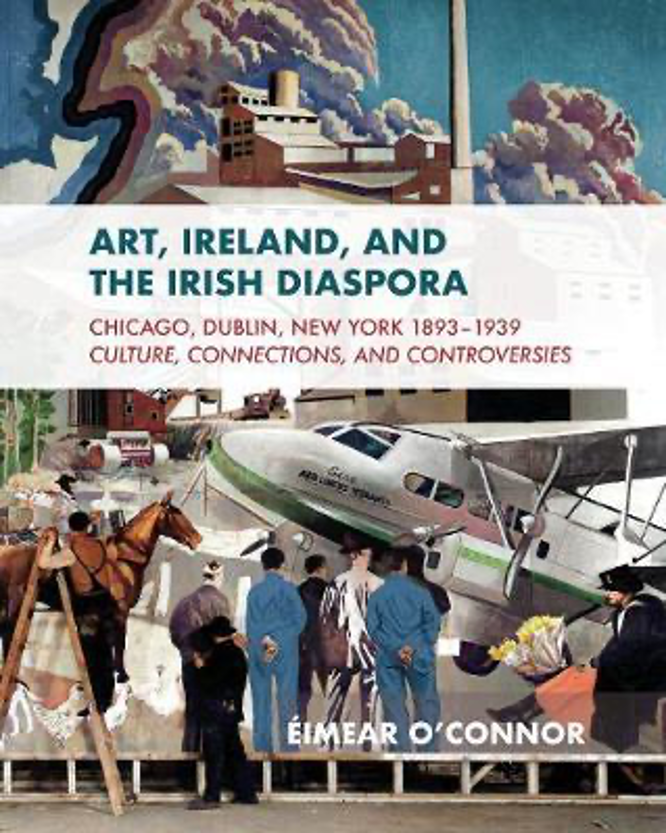 In a visually pleasing treatise – it looks more like an art book than a monograph – Éimear O’Connor has provided a comprehensive review of the world of Irish art around the turn of the twentieth century. While the book may at times feel like a clumsy read, with much repetition and reiteration of already stated details, it is clearly meant to be read less as a narrative of the state of Irish art than as a compendium, with stand-alone chapters dealing with much of the arcana surrounding that world. As such, the book coheres less in its narrative than in its thorough examination of recondite details that helped shape both Irish art and the idea of Irishness, especially as it was presented in the United States.

O’Connor’s overall project, then, is to address the way relations between Ireland and America helped to support and indeed create Irish art, and she does so by elucidating the connections between patrons, artists, exhibitions, fairs, reviewers, and collectors and consumers of that art.

In her first section, O’Connor connects art and industry, examining the influence of women such as Mrs. Alice Hart and Lady Ishbel Aberdeen who organised centres for activities such as spinning, weaving, knitting, sewing, and embroidery, teaching and exploiting what Hart referred to as “cottage crafts.” In doing so, Hart created and stoked the desire for a kind of authenticity for such products through her marketing. Both women saw their work as a kind of charity, helping people to support themselves. The Irish Industries Association, established in 1886, was created to expand classes and to increase sales throughout Ireland, England, and the United States. As the work grew, so too did the desire to exhibit that work, and both women (somewhat controversially) became involved in efforts to export Ireland’s authentic country charm to international venues, including at the 1893 Chicago World’s Fair, where two separate “Irish villages” were on display. The example of the two women, each vying for such seemingly similar projects, served to demonstrate the heightened tensions surrounding Irish politics: it was increasingly difficult to separate questions of art and authenticity from the Home Rule question and the Nationalist movement. Donations to each project followed accordingly.

One of the details that becomes startlingly clear throughout the book, lest those of us who are not artists may have lost sight of it, is the vastness of the influence of, well, the influencers: the donors and the reviewers. As O’Connor recounts the networks between John Quinn, an Irish-American lawyer in New York, and those he supported, she forces a consideration of what Irish art might have become without someone such as Quinn. His tastes, his connections, his money, his love of art determined who came to the United States, who showed there, who met whom, and who was nearly assured of success. She does not imply his power was insidious, but merely far-reaching and extraordinarily generous, bringing Irish visual art to the attention of the international scene when what little Irish art was seen outside of Ireland was generally listed as “British,” and therefore lacking in distinction. The point is reiterated later, when she discusses the Helen Hackett gallery, which offered another opportunity for Irish artists who may otherwise have gone unnoticed and unheralded.

One of the strengths of O’Connor’s book is that her panoply goes far beyond the standards that are most often discussed when Irish visual art is mentioned: John Butler Yeats, Jack Yeats, Seán Keating, and the Hugh Lane controversy are rehashed, but O’Connor also references a number of lesser-known artists and their influence, including Marjorie Organ, Mainie Jellett, Patric Farrell, Leo Whalen, Sarah Cecilia Harrison, and others. As these more modern artists became better known, controversies arose. As Declan Kiberd notes in the introduction of this text, “Americans, too, were changing, but not at the speed of the Irish intelligentsia: hence the anger vented by Yankee Hibernians on certain radical forms of art from the old country when put on exhibition in the new. Perhaps, in their subconscious, many Americans wanted to keep old Europe old, if only to mark themselves off the more easily as modern” (xv). Those Americans continued to long for what they perceived as authentic representations of Ireland, while the artists fought against stereotypes and preconceived notions of Irishness.

Thus O’Connor effectively illustrates the way competing visions of Ireland, furthered through politics – Home Rule, the Lockout, wars – and personalities – John Quinn, Hugh Lane, Lady Gregory, George Russell, Helen Hackett – also exert control over the success of artists. The trajectory of individual artists and their reception, as O’Connor delineates it, is greatly affected by elements far beyond their control. When Quinn dies and when Hugh Lane’s estate is encumbered, the public impression of Irish art shifts. When George Russell says, having visited a Post-Impressionist exhibit in Dublin, that “the only conclusion I can come to after looking at these pictures was that the painters were not decadent, but merely decrepit,” people listen (118). When Helen Hackett opens a New York gallery and exhibits Irish art, having travelled throughout Ireland collecting items (her diary is quoted extensively – perhaps excessively so – herein), she helps to revive interest in Irish art. Culture, then, is deeply affected by every swing of such politics and personalities.

In the final diffuse section of the book, O’Connor takes on the filming of The Man of Aran. While the organising principle here seems to also reflect concerns with “getting it right” as Ireland is represented, the connection of this chapter to the rest of the book is much less obvious, though the section is interesting in its own right, discussing the production and casting processes, and photographic contributions of the director’s wife, Francis Hubbard Flaherty. The transition in the same chapter to the New York World’s Fair and the role of Irish art throughout the World of Tomorrow exhibition is murky at best, unless only to bring the thread back at the conclusion to yet another World’s Fair, this time in 1939, to demonstrate that not much had changed over forty-six years.

Ultimately, and however problematic in retrospect, the construction of Irish identity in America in the closing years of the nineteenth century and the opening years of the twentieth century was very much influenced by those such as Lady Aberdeen, and indeed, Mrs Hart. […] Amid all the turbulence of the age, intricate connections between Ireland and America in general, and Dublin and New York in particular, established pathways between here and there that were to prove vital to the development of visual culture in Ireland. (89)

Such has been demonstrated throughout her book, though how effectively will depend on whether the book is approached as a cohesive argument or as a reference book.