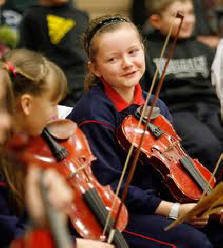 It is with the positive side of this equation – the healing, redemptive power of music – that director Frank Berry’s documentary feature debut is concerned. The film documents the efforts of Ron Cooney, a music teacher whose affable demeanour masks a fierce determination to enrich and transform the lives of the young people of Ballymun. This is no simple task in an area that has become synonymous with social deprivation in Ireland; a quick-fix, system-built experiment that became the worst planning disaster in the history of the State (McDonald 2010: 250). Now, to mark the area’s redevelopment, a choral-orchestral musical suite is commissioned. This provides Ballymun Lullaby with a natural story structure as the eponymous suite is rehearsed, recorded and performed by Cooney’s young students in collaboration with composer Daragh O’Toole, conductor Frank Brophy, and the RTE Concert Orchestra.

A succinct, tightly edited opening sequence sums up the brief history of the notorious Dublin estate. Ballymun’s creation, in response to severe housing problems in Dublin’s overcrowded inner-city tenements, is presented via archival footage as “a bold, daring and ambitious attempt to serve a desperate need in the capital city”. The initial optimism is quickly undermined, however. Sparse recreational amenities, inadequate shopping facilities, and poor housing maintenance combine to create a suburban ghetto where unemployment, crime, drugs and so-called anti-social behaviour become the norm. Less than forty years after it began, the high-rise experiment ends. The estate is redesigned on a low-rise human scale, and in a powerfully symbolic moment, the maligned towers are brought crashing to the ground. It’s a bittersweet moment for Ballymun residents, for whom the towers, for all their attendant social problems, represented community, youth and home.

Berry (who is credited as producer, director and editor) constructs Ballymun Lullaby around a series of interviews interspersed with music rehearsals, archive footage and landscapes. The major contributions come from Cooney and three of his young charges: multi-instrumentalist Tara, lyricist Darren and singer Wayne. Cooney’s notable ability to communicate with and inspire his students is illustrated in a number of exchanges. His apparently boundless optimism seems to prevent him from voicing any negative thoughts: he is obliquely critical of the education system, but when he starts talking about promising students lost to the dubious priorities of adolescence, he is unable to complete the sentence. Later, a brief allusion to a health problem underlines his tireless dedication to his work, which he describes simply as “to engage the children through the medium of music”. Tara, Darren and Wayne’s contributions, meanwhile, leave the spectator in little doubt about the value of this engagement in their own lives.

It is tempting, given the theme of urban regeneration, to reflect on parallels between Ballymun Lullaby and the GPO Film Unit’s Housing Problems (Elton and Anstey 1935), another film that “uses the actual voices of those involved in the situation to create a warm, convincing account of people working together to reverse decay” (Barsam 1992: 109). The inclusion of these voices was considered radically innovative at the time, although the associated formal device, the ‘talking head’ which evolved into standard practice in television journalism, has become sufficiently hackneyed that its use in documentary film is sometimes derided as unimaginative (Sarkar and Walker 2010: 2). Berry’s innovation is to shoot many of his interviews on the move, in a series of outdoor travelling shots that depart from the carefully composed static tableaux that otherwise dominate Ballymun Lullaby’s gaze. Berry has claimed that this decision was taken to overcome the stilted nature of the studio interviews he had originally taped with his subjects (SDGI 2011). Whatever the provenance of the creative decision, Berry’s ‘walking heads’ become a striking feature of Ballymun Lullaby, firmly locating his subjects within the three-dimensional space of their everyday environment. These shots also illustrate starkly the unfinished nature of the Ballymun regeneration project, as the moving camera repeatedly reveals the extent of waste ground and dereliction that forms the physical backdrop to the protagonists’ lives – a liminal space between the old and the (as yet unfinished) new Ballymun. Berry also allows some verité-ish ruptures as these filmed walkabouts are repeatedly interrupted by passing pedestrians and motorists, drawing attention to the documentary artifice, perhaps, but also to the vibrant – and occasionally vaguely threatening – nature of street life in the vicinity.

Ballymun Lullaby has its roots in a series of voluntary community video productions in which Frank Berry and videographer Kevin Duffy had participated, and indeed the project commenced along those lines. The film was shot on standard definition digital video on a no-budget basis after Berry and producer Joanne O’Hagan were unable to find funding for a television documentary on the Tower Songs project (SDGI 2011). An eventual award of €60,000 in completion funding from the Irish Film Board was spent on sound mixing and picture grading, bringing the film to a suitable technical standard for festival exhibition and, eventually, theatrical exhibition in Ireland.1 The film was enthusiastically received at the major Irish film festivals throughout 2011, leading to a pre-Christmas theatrical release. Berry also won the Screen Directors Guild of Ireland’s Director Finder Series award, leading to a showcase Hollywood screening in front of US film distributors and other key industry players.

At the time of writing, however, no US distribution deal has been announced, and despite its festival success in Ireland, perhaps television is a more natural home for Berry’s film, especially given the necessarily limited scale of its cinematic ambition. The film has already been shown in Ireland on RTE television, where it has marked a refreshing change from the frequent articulation of community and arts involvement within half-hour ‘factual programming’ formats, often fronted by minor celebrities with little or no natural connection to the subject matter. In contrast to such presenters, Ron Cooney, his students, and the rest of the real people populating Ballymun Lullaby’s frame seem more genuine, more dedicated, and frankly more interesting.