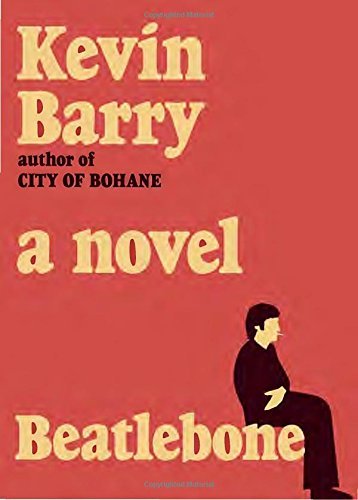 In 1967, John Lennon bought the island of Dorinish in Clew Bay, off the coast of County Mayo. Although he and Yoko Ono planned to build a holiday retreat there, he only visited once. Instead, in 1970 he put Dorinish under the care of “King of the Hippies” Sid Rawle. A hippie commune lasted two years. Ono after Lennon’s death sold the island and donated the proceeds to an Irish orphanage.

These facts inspire the setting for Kevin Barry’s Beatlebone. Unlike his experimental first novel City of Bohane (see my review in Estudios Irlandeses 7 [2011]), this narrative follows a calmer style and reflective pace, akin to his short stories collected in There Are Little Kingdoms and Dark Lies the Island. Yet the quirks remain. Barry resists a straightforward account of Lennon’s imaginary 1978 stay on Dorinish. Instead, the author enters the tale in its midst, interjecting the feelings of loss and loneliness which Lennon in this telling is shown to have endured, in the doldrums during his career.

Whether Beatlebone needs this authorial intervention is a question sure to linger for many readers. Barry introduces a John Lennon compelling enough to carry the plot along. Nearing forty, uneasy with settling down as a family man, blocked in his creativity, haunted by his parents’ infidelities, Lennon gives over his fate, temporarily, to an unpredictable driver, Cornelius, his guide to Dorinish.

The island holds few charms. “It is attended by ghosts but they are his own and not sombre. There are a few habitations about like misplaced teeth but they invite no questions.» Barry’s spare prose mirrors Lennon’s weary and wary detachment. In the Amethyst Hotel, taken over by the remnants of a commune, the “carpets squelch underfoot and give off the stale aniseed waft of seawater”. Barry’s phrasing testifies to his protagonist’s finicky, wry reactions to his West of Ireland immersion. The former Beatle expects no magical mystery tour: “Zola wrote that the road from Lourdes is littered with crutches but not a single wooden leg”. Lennon and Barry seek together the “as yet unwritten radical history of the west of Ireland”. But the storyteller prefers to withdraw from channelling this quest through Lennon. Instead, Barry scoffs to himself as if he “would return to report my findings in a mature, formed prose, as clear as glass, this from a man who had never knowingly underfed an adjective”. Perhaps Barry and Lennon indeed merge in this meticulous, fussy attitude. But Barry struggles to “get the voices right” so “the fiction might hold for a while at least”. He interrupts himself.

Later in the novel, resonances of Joyce and Beckett swirl: “the years are peeling off and time is shifting”. Lennon hears: “We’re getting closer, John. Despite ourselves.” Lennon himself diminishes, seen through another’s perspective on his legendary status. “The leader was a beautiful looking boy, she says. The big eyes like saucers and the song about the blackbird.” Barry’s matter-of-fact prose conveys a fan’s everyday response, spare but poetic. Beatlebone delicately touches upon the costs of celebrity and the desire to flee fame for the simple life, even if this cannot satisfy this subject, a man who must return to the studio, return to the city, and resolve to pursue his muse far from Dorinish.

Barry presents a proud, sometimes self-deprecating, but determined Lennon. The impact of the Irish location, as Barry’s phrasing about what stays “as yet unwritten” hints at the lacunae within this meandering novel. Barry plays down the island’s power, defying a reader’s and Lennon’s expectations. Cornelius and other local characters are played off Lennon’s attempts at anonymity, but he cannot be cowed. The figure of John Lennon, his intelligence, his hatreds, and his talent, cannot hide. Out of this predicament, Beatlebone attempts with mixed success to convey the struggles within Lennon. For we know that he will not stay on Dorinish, and that his drive to make music and revel in the life of family and friends drew him soon away again, back to New York City and back to Yoko Ono.

Barry’s work to date demonstrates his knack for off-beat situations and troubled seekers. The isolation Lennon both seeks and shrinks from on Dorinish, doubled by the author’s similar confessions of despair and desire for renewal, resonate throughout Beatlebone. Despite underdeveloped passages, and Barry’s stubborn determination to step into his fictional re-creation of Lennon’s wishes for an Irish hideaway, this novel invites contemplation. In one of the very few chapters in this Beatle’s life so far left to the imagination more than fanatical documentation, Kevin Barry draws out the tenuous Irish threads, loosely scattered, within John Lennon’s past to unreel rather than weave this storyline.