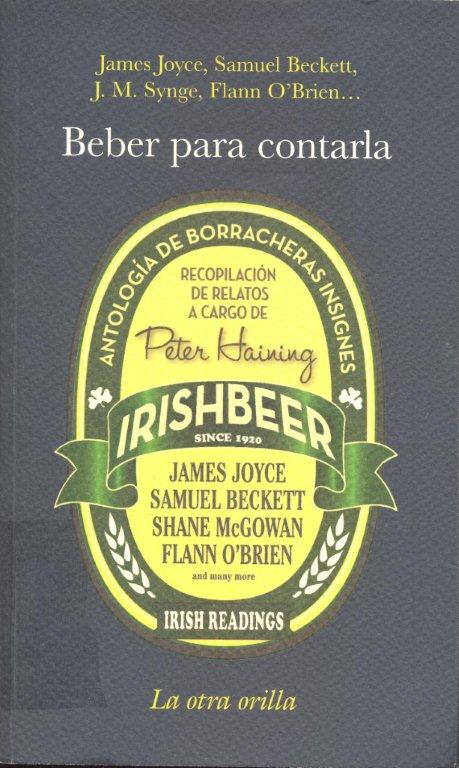 Beber para contarla is a selection of 12 pieces from Peter Haining’s anthology Great Irish Drinking Stories (2002), and nobody in their right frame of mind can say that this is a careless selection: James Joyce, Samuel Beckett, J.M. Synge and Flann O’Brien, among others, have been chosen by Miguel Martínez-Lage, who is in charge of the present edition. The main idea, as in the original book, is to provide a panoramic view of the talents that have been applied to the Irish drinking culture. Martínez-Lage has commanded a team of six highly competent translators, including himself, and the result is a varied, colourful and attractive volume with more than one interesting surprise.

One would expect a celebration of revelry in all the stories in the volume, but the reality is quite different. Very few stories, in fact, deal with the joys of drinking, but rather with its aftermath and with that terrible word, consequences. Although most of the stories take place in a pub, the focus normally falls on the effects of drink, as it would correspond to a guilt-ridden country. With respect to alcohol, here it can be applied what Hanif Kureishi says about sex in his latest novel. The protagonist’s son would soon discover “how problematic sex is, and how much people hate it, as well as how much shame, embarrassment and rage it can encourage” (Something to Tell You, 2008: 29). The same negative responses are associated with the consequences of drink in the stories of Beber para contarla. Think of the superb “Grace”, by James Joyce (“Por la gracia”, translated by Martínez-Lage) in which Mr. Kernan has been found unconscious on the toilet floor after a bout of drinking. Or consider the pub grotesques in “Ding-Dong”, a story by Samuel Beckett, where an old tramp lady sells seats in heaven to the locals. This story by Beckett is a rarity in its original version and even more in its Spanish translation. It belongs to Beckett’s only volume of short fiction, More Pricks than Kicks (1934), a volume translated into Spanish by Víctor Pozanco in 1991 with the unfortunate title ofBelacqua en Dublín. (Some years later Jenaro Talens would suggest as a possible title Más pichas que dichas, which is quite funny). In “Ding-Dong” Martínez-Lage fully extracts the colour and flavour of Beckett’s text, a smooth texture covers it all and the sentences flow naturally, as if the words had been adopted as one’s own by the translator.

But going back to the after-taste of alcohol and to the surprisingly gloomy tone of this collection of drinking stories, the reader cannot feel but appalled at the deadly consequences of Mr Doherty’s secret habit and at the bitter tears of his widow at the end of “The Diviner” by Brian Friel (“El Zahorí”, translated by Eugenia Vázquez Nacarino). “The Hen Party” by Eamonn Sweeney (“La despedida de soltera”, translated by J. L. Miranda) ends up in a gory massacre in a pub, although the effect of drinking is more poignantly dramatic in “Just Visiting” by Bernard Mac Laverty (“De visita”, translated by Carlos Pranger), a beautifully sad story that only a master of the short form like Mac Laverty could put into words.

It is completely adequate that at least a few pieces share some of the fun that is associated with the craic. Thus, it is refreshing to read “The Rocky Road to Dublin” by the leader of The Pogues Shane MacGowan (“El pedregoso camino a Dublín”, translated by Carlos Pranger) even though it is not a short story but a fragment of his memoirs A Drink with Shane MacGowan (2001). Here MacGowan reveals the circumstances that surrounded the birth of his group and how their music is closely connected to Irish writers and to the nation’s passion for popular Irish music and drink. Rather that sounding awkward in Spanish, MacGowan’s words sound perfectly at ease in Carlos Pranger’s translation, with an effective use of colloquial Spanish.

“The First Singles Bar” by Malachy McCourt (Frank McCourt’s brother) is also an entertaining autobiographical account, dealing in this case with the opening of the legendary Malachy’s Bar in New York in 1958. The volume also offers interesting pieces taken from Irish classics: “La historia de Christy Mahon” (translated by Jaime Blasco Castineyra) is a fragment from J.M. Synge’s The Playboy of the Western World and there are two curious stories from 19th century authors: William Carleton and Robert J. Martin.Beber para contarla, in short, is a book that deserves to be read and kept in one’s library. It contains everything around the topic of drink and it is equally hilarious and sad, perhaps like drink itself.