by David Pattie. This text may be archived and redistributed both in electronic form and in hard copy, provided that the author and journal are properly cited and no fee is charged for access. 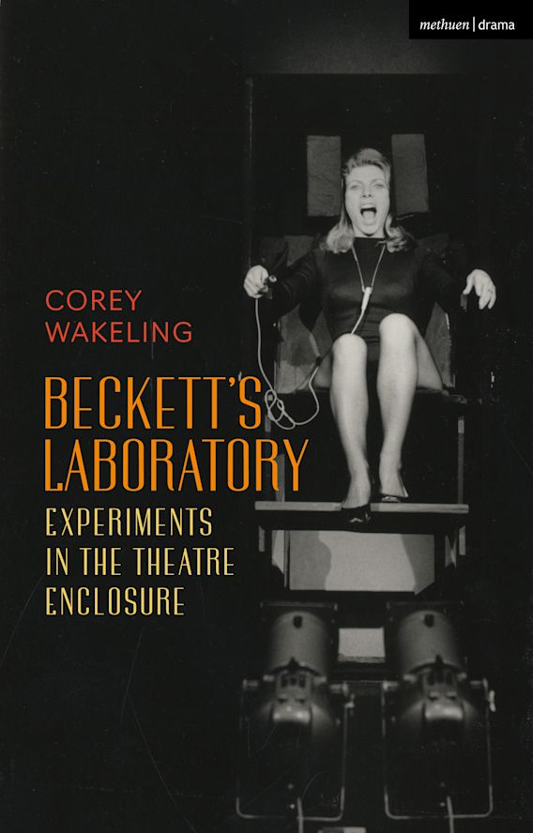 Corey Wakeling’s monograph, Beckett’s Laboratory: Experiments in the Theatre Enclosure, starts off from the welcome premise that Samuel Beckett’s theatrical work is not, as is sometimes assumed, simply an exercise in the creation of performative objects, but is, rather, a type of dramaturgy which is as concerned with the plastic, evolving performance event as that of any of the other main practitioners of the twentieth century. He argues, in other words, that a fruitful way to examine Beckett’s theatre is to work on the assumption that it is as much of a performance laboratory as Jerzy Grotowski’s “Poor Theatre,” albeit one that operates in a different relation to the performer, the scenography, and the text.

This is, to say the least, a welcome argument. Wakeling quotes Jonathan Kalb’s much-repeated phrase, that Beckett is “avant-garde to the conventional, and conventional to the avant garde,” and Beckett’s own comments to Colin Duckworth (“I simply produce an object”); the rest of the study provides ample evidence that neither statement quite holds true. Beckett’s work for the theatre is, in Wakeling’s analysis, a laboratory within which the nature of the self can be examined, but one in which a final summation of that nature will never be reached. This makes Beckett’s work both ordered and contingent, rigorously structured yet porous, abstract and yet powerfully, viscerally corporeal. The nature of the Beckettian experiment is to create fragile, ordered structures in the midst of a disordered, not to say chaotic, reality. These experiments will fail, because no experiment in such a situation would succeed, but the information generated by that failure will then form the basis of future experiments.

To find ammunition for his argument, Wakeling looks in part to works that are sometimes thought of as minor parts of the Beckettian canon. In his first chapter, for example, he makes an interesting case for both Act Without Words 1 and 2. Very often regarded as rather unsubtle visual metaphors of the crises endured by more celebrated characters such as Winnie, Godot’s tramps and Not I’s Mouth, they are, for Wakeling, key performance texts, because they stage the moment when mimesis in Beckett’s theatre fails. The protagonists’ actions do not represent anything, because the process of action they are bound to is either circular or doomed to failure. In other words, the mimes answer the experimental question, what happens when a form predicated on the imitation of an action finds that it has no meaningful actions to imitate?

The rest of the study traces the working out of other experimental questions; what happens when both actor and audience are plunged into forms of sensory deprivation (as they are most strikingly in Not I); what happens when symbolic elements within the construction of the event have nothing clear to symbolise?; how does spectatorship operate, and under what conditions is it placed under strain?; how can performance recreate (or fail to recreate) altered states of mind?; and how can a politics of performance emerge from a laboratory exploration of the fragility of ideology?

Wakeling explores these questions in a series of chapters that are theoretically dense (indeed, if I have one criticism of the text it is that it covers a lot of theoretical ground very quickly) but which repay careful study. This is a text that requires close engagement; however, such an engagement is eminently worthwhile. The placing of Beckett in the performance history of the twentieth century has been a question that has interested Beckett Studies for as long as the field has existed. Wakeling’s book might not contain a definitive answer to the question (indeed, given the complexity of Beckett’s work, I am not sure that any one text could), but it does ask some very interesting questions about that relation, and it does provide, if not a final conclusion, then at least an interesting framework for further enquiry.