by Declan Kiberd. This text may be archived and redistributed both in electronic form and in hard copy, provided that the author and journal are properly cited and no fee is charged for access. 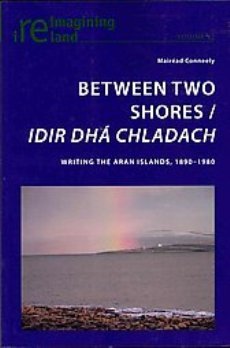 The Aran Islands have often functioned as an open, even utopian, space in which outsiders could read the lineaments of their own desires. The playwright J.M. Synge, newly arrived in 1898 from a sojourn in Paris, saw them as a sort of socialist commune. Even today some idealists hope to find in them a version of an eco-friendly counter-culture and one is reported in this book as returning in disgust to the mainland after sighting a branch of Supermacs on Inis Mór. But the romanticizing impulse, as Mairéad Conneely shows in this engaging and wide-ranging study, can be found also among some islanders themselves and especially among those like the poet Máirtín Ó Direáin who have had to leave. Working for most of his life as a civil servant in Dublin, Ó Direáin spent so many years away from the islands that he had time to find in them a past Ireland which offered ‘faoiseamh’(relief), ‘coinnle geala’ (bright candles) and a people who spent their days ‘ag labhairt filíochta i ngan fhios dóibh féin’ (speaking poetry unknown to themselves).

That idealization, at least in the case of Ó Direáin, was accompanied by a ferocious critique of city life, a life characterized by images of loose women, hollow men and general cynicism – a potent  blend of Eliotic ennui, deskman’s torpor and Celtic revivalist ideology.  Yet there were times when the poet presented a more inflected version of himself, as of someone who had no final home in which to hang his hat:

Between two shores\ Are the fish I seek,\ Between two traditions\ I have missed my chance.

Dr Conneely takes her title from this poem but, far from seeing the in-between condition as a deprivation, she argues that it represents an imaginative opportunity, linking the otherwise disparate writings of Emily Lawless, J.M. Synge, Liam Ó Flaithearta and Máirtín Ó Direáin on the islands as theme.

Her presentation of Lawless’s Grania is an act of critical rehabilitation, for she sees the author as someone who moved well beyond either a unionist or nationalist position and who could accordingly present her protagonist as simultaneously both inside and outside the community. The subtleties of such a stance did not protect her against that depression and mental turmoil which was part of her aristocratic family’s inheritance, but Dr Conneely defends her in the face of neglect by  nationalists of a later period and of a critique by Synge, who considered her insufficiently familiar with island life. Synge thought her ill-advised to use the novel as a form to render island life, yet he himself spliced some elements of novelistic narration with those of the fragmented modernist travelogue to produce The Aran Islands.

Dr Conneely, in due turn, defends Synge against those critics (including his greatest admirers) who find that book jagged and inartistic. She reads it as a kind of spiritual autobiography and the islands as a zone which offered Synge, in objective splendour all around him, a version of that inner life with which he had struggled but failed to express for most of the previous decade. What he shared with Lawless, of course, was an old ascendancy desire to avoid the accusations of history against his own people and a felt need to impatriate himself through geography, landscape and the terrain. But Dr Conneely also registers the honesty and humility of his main motivation: to get to know the people by living among them. What Synge discovered was that, no matter how deeply he mastered Irish, he would always feel an ‘interloper’: yet this is precisely the same feeling of estrangement which would later assail that native islander, Ó Direáin, whose poetry over the passing years recorded how his very artistry had left him an inner exile, even in the days of his childhood. Hence his fellow-feeling, voiced in ‘Ómós do John Millington Synge’ – as if both of them, in recording the flowering and loss of a culture, were doomed to record its memories ‘i dteanga eachtrann’(in an alien tongue).

In reviewing her authors and the realities of island life, Dr Conneely is careful to restore a sense of the material history which has too often been overlooked or deflected by simplifiers. Inter alia, she reminds us that Ó Flaithearta’s generation had better written and practical English than Irish on leaving school. She also reports that Inis Mór had long been anglicised and that there was even sympathy among some islanders for the Black-and-Tans. She helps readers to understand the contrarian impulses that led Ó Flaithearta to join the British army during World War One and then to support the republican insurgency during the Civil War in Ireland. Caught between writing in Irish and English, he represents the ‘in-between’ state even more comprehensively than the other authors: Dr Conneely shows that the failure of the Gaelic Drama League to pay him a promised fee for his Irish-language play Dorchadasleft a psychic wound which goes some way to explaining his resort to English after the commercial success of The Informer. She repeatedly regrets the lack of a proper biography of this fascinating man, whoseDúil constitutes one of the great collections of short stories by an author in either Irish or English during the past century: but the reasons for this may have less to do with his oscillations between languages than with the paucity of documentary evidence which he left and the unreliability of what little there is.

The islands are and were a place apart. Breandán Ó hEithir, Ó Flaithearta’s nephew, was once described as ‘Árannach a tháinig go hÉirinn’ (an Araner who came to Ireland); and when the young Muiris Ó Súilleabháin stepped on to the quayside at Dingle he was asked ‘An Éireannach thú?’ (Are you an Irish person?), to which he replied ‘Ní hea – ach Blascaodach’ (No – a Blasket person). Even the mainland Gaeltacht is a mere effect of colonialism as well as a reply to it but in no ultimate sense a transcendence of such forces. The Gaeltacht is in the end a native quarter, with all the potential and limits which that phrase implies. But the islands seem something else again – too detached to be decodable in terms of any single official discourse.

This may be what Dr Conneely means by ‘islandness’. Her study recapitulates and tests many of the set themes of Irish Studies – postcolonial, feminist, utopian theories – against the stubborn, unyielding realities of island life. In the last analysis it finds some, but no final, truth in each approach. This work began as a thesis; yet, like Synge’s beautiful account, it is an exercise in Negative Capability – prismatic in its openness to many interpretations, unwilling to stabilize any one, honest in reporting the ways in which the subject eludes an ultimate formulation. And, as in The Aran Islands, this study towards its end becomes ever more fragmented, as if such a work (like the islands themselves) can be abandoned but never quite finished.