by Manuela Palacios-González. This text may be archived and redistributed both in electronic form and in hard copy, provided that the author and journal are properly cited and no fee is charged for access. 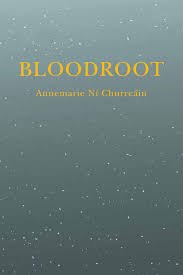 Bloodroot, a plant with underground rhizomes which secretes red sap when cut, is a most appropriate trope for the expression of a wounded subjectivity that exudes pain and anger through memories of women’s dispossession of their bodies, their children and their dreams. Annemarie Ní Churreáin’s debut collection, Bloodroot, was written “as a form of revolt against the push and shove and thrust of a deeply patriarchal society” (“I Was Raised”). This explicit feminist statement should make us wary of siren songs about the advent of a postfeminist age in which women’s rights are no longer at issue since, as late as 2017, Bloodroot exposes the persistence of open wounds and inherited traumas inflicted by a patriarchy on women’s sexual and reproductive lives.

Ní Churreáin’s book consists of three parts, the first of which contains the title poem, “Bloodroot”, with a dramatic monologue in which nobody seems to answer or even hear the poetic persona’s questions. Set at the Castlepollard Mother and Baby Home, the poem engages with the taboo around women’s socially inconvenient pregnancies –

Doors if I stitch you a collar of lace   all Spring

as I wait for the first-born

Ní Churreáin writes polyphonic verse and thereby allows formerly silenced voices to be heard. The overt political denunciation of the Irish State’s repressive policies is not at odds with the poet’s craft. On the contrary, Ní Churreáin excels at the subtle blend of place, subjectivity and engagé poetry as she delves into “the relationship between landscape and lyrical control … between the place I physically come from and the State in which I, as a woman in Ireland today, now exist” (“I Was Raised”).

A recurrent topic in Irish literature and criticism is that of “sense of place” and one may wonder about the possible intersections of rootedness and gender. Many are the poems in Bloodroot that present nature as the primary stimulus to write, as is the case of the first poem in the collection, “Untitled” —

Badger trails called me aside for a word.

or the poem “Doire Chonaire” —

To you I owe my hunger.   For metaphor

is a failed attempt to speak in common terms” (22)

Ní Churreáin’s verse playfully melds, by means of adept caesura and line break, the yearning for writing and the allure of landscape. The gender perspective, however, is made explicit in poems such as “Border” (“women / who like me possess the earth // in their eyes”, 26) in which the landscape is embodied and the female poetic persona enacts the repossession of the lost land while reflecting upon the scar left by the border on the distaff genealogy. A similarly gendered sense of place pervades “Family Law”, in which Ní Churreáin appropriates the ancient Ogham language and its tree alphabet to refute a Christian discourse about women’s inferior and culpable condition –

But daughter, we come from the spriest woods.

You and I are the roots

that uphold an alphabet to the sun.

Not surprisingly, the Galician poet Marilar Aleixandre also chose this tree alphabet as the central motif of her collection abecedario das árbores [a b c of trees] (2006) so as to forge bonds between the two Atlantic communities, their landscapes, their vernacular languages and their women –

a herdanza das bruxas (48; note below)

The second part of the collection has a significant focus on the disciplined, punished and incarcerated body, thus illustrating Ní Churreáin’s interest in “placing the body back at the centre of human experience, placing human experience back at the centre of the State” (“I Was Raised”). The dismembered body is “thrown up out of the underworld” in “The Kerry Foot” (35), very much like those unacceptable truths which, though deeply buried in the unconscious, resurface again and again as in Sigmund Freud’s return of the repressed. Myth and daily life entwine to convey a long and interminable history in the oppression of women, although the reference to the legendary Sadhbh also allows for a degree of feminine empowerment and self-defence:

This was the fortune foot of Saidhbhín,

who set a hoof

into the centre of a soldier’s fort

to win her human body back.

One touch of the earth

and the hide fell

Reality and fantasy, the conscious and the unconscious, the physicality of the chastised body and the discarnate nightmare confer a surrealistic mood upon the second part of Bloodroot that recalls Buñuel’s and Dali’s film Un chien andalou (1929) – especially so in poems such as “Saidhbhín” – probably because Catholic Spain and Ireland have lived under comparable moral strictures. The recourse to myth and the oneiric alongside quotidian reality is a characteristic feature of Irish poetry that we find in other women writers such as Nuala Ní Dhomhnaill – her poem “An Bhatráil” [The Battering] from The Astrakhan Cloak (1992) comes to mind as another poignant rendering of tortured motherhood. Paula Meehan’s “The Statue of the Virgin at Granard Speaks” from The Man Who Was Marked by Winter (1991) is also recalled as we read Ní Churreáin’s “The Secret”, both being poems about the fifteen-year-old girl who died giving birth close to a statue of the Virgin at Granard in 1984. If Meehan gives a voice to a contrite Virgin Mary, Ní Churreáin seems to locate her poetic persona in Ann Lovett’s place as she closes the poem with the questions: “What can I do? Who to tell?” (42). These examples of intertextuality evince a genealogy of Irish women writers whose legacy Ní Churreáin has taken up with admirable mastery and sensibility.

Part III of Bloodroot undertakes a voyage out: out of Ireland so as to discover other hospitable landscapes in America and in Asia; out of a tortuous past so as to pave the road towards more auspicious days. After the trauma and the telling there comes the time for reconstruction. Residual pain persists but is soothed by love, commitment, tenderness and hope. The poetic persona reclaims the sun owed to her, as in the poem “Séance” where the participant no longer summons the dead person’s spirit –

Loved ones if you are listening, I need no proof of you.

The dead now “shiver light back / down into our bare bones” (“In The Butterfly House”, 68) and life flows again in the abundant rivers that irrigate this section with suitably swift poetic rhythms. As in “Swim Lesson, Goa”, trust substitutes for fear and the body will not be erased — “such is the compulsion of it to be acknowledged” (Ní Churreáin, qtd. in Frank). Instead the body takes delight in its five senses while the poet patiently kneads the dough of verse.

Bloodroot is Annemarie Ní Churreáin’s debut collection but this should not mislead readers into thinking it is a fortuitous achievement. Her control over rhythm, imagery and lineation attests to a command of form and thorough training. Some of the poems here included first saw the light in The London Magazine, Poetry Ireland Review, The SHOp, Agenda Poetry Journal and The Stinging Fly, while Ní Churreáin herself has been awarded literary fellowships in Germany, the United States and the United Kingdom, and has been the recipient of a Next Generation Artists Award from the Arts Council of Ireland. This trajectory and its outcome in Bloodroot attest to the making of a good poet who, we expect, will continue to provoke and move us with her art.

“it was among the brambles / you hid your tongues   crossed hands behind your backs / perhaps because we would not deny / the witches’ legacy”. [My translation from Galician].

Ní Churreáin, Annemarie. “I Was Raised in the Shadow of Men who Wanted to Conquer Wildness”. The Irish Times. 26 October 2017. https://www.irishtimes.com/culture/books/i-was-raised-in-the-shadow-of-men-who-wanted-to-conquer-wildness-1.3268313.