Bohemian Belfast and Dublin: Two Artistic and Literary Worlds, in the Work of Gerard Keenan

Bohemian Belfast and Dublin: Two Artistic and Literary Worlds, in the Work of Gerard Keenan

by Kaitlin Thurlow. This text may be archived and redistributed both in electronic form and in hard copy, provided that the author and journal are properly cited and no fee is charged for access. 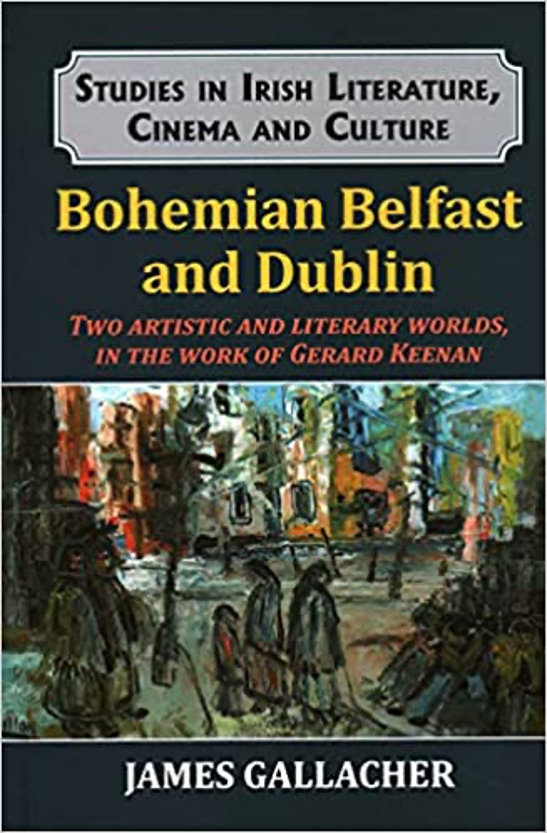 Gerard Keenan, also known as Joe Biggar and Jude the Obscure, seems to have circulated under the literary radar in Bohemian communities in his native Belfast. James Gallacher connects the author’s literary strands of journalistic, critical, and creative writings into one volume, Bohemian Belfast and Dublin: Two Artistic and Literary Worlds, in the Work of Gerard Keenan. The collection sheds new light to the author’s legacy, rescuing unpublished work from his later years and uncovers a wealth of essays and short novels produced over the course of his professional life.

Those unfamiliar with Gerard Keenan, or who will be re-introduced to him outside of his work as Jude the Obscure (a contributor to the Honest Ulsterman) will find a meticulously researched collection here. Gallacher weaves Keenan’s critical and creative work together to position him as a leading figure moving between Bohemian Belfast and Dublin where he traversed artistic, literary, political, and social circles. Gallacher frames each selection chronologically with a richly detailed backstory in a well-researched introduction. Providing relevant historical context, he fills in biographical information and offers literary analysis of Keenan’s experimental fiction.

Gallacher points out that Keenan, who adopted the pseudonym Jude the Obscure, became “a longstanding keynote columnist for long running Northern Irish literary magazine from 1971 until its final print issue in 2003” (1). Keenan published the column in the “The Business Section” of Honest Ulsterman, covering a range of cultural commentary, including a 1996 essay on Duke Ellington. In February 2016, Honest Ulsterman editors Michael Foley and Robert Johnstone profiled Keenan in the online magazine shortly after his death in October 2015. In the identity of Jude the Obscure, which he adopted from the 1895 novel by Thomas Hardy, Keenan may have found an allegiance. In 1971, the BBC adapted the 1895 novel into a TV mini-series, and Keenan perhaps saw a little of himself in Jude Frawley, the stonemason striving for a more scholarly life. Foley details how the fractured family circumstances in Keenan’s youth affected in his later worldview:

But, regarding the critical essays he wrote for the Honest Ulsterman as Jude the Obscure, I think that the crucial influence was nothing artistic but the early death of his father, an accountant who provided his family with a comfortable middle-class lifestyle and status. Perhaps unexpectedly for an accountant, Keenan’s father was cultured and well-read, and passed on a love of literature to his son, who would have expected a full education and a professional career, only to have his family suddenly plunged into poverty and be obliged to leave school at the age of fifteen to earn money in menial jobs.

In the remembrance, Johnstone added, “I suspected that his experience of losing his father at an early age and growing up Catholic in wartime Belfast had instilled in him a determination to provide for himself.” The Honest Ulsterman formed as a print magazine was subtitled “A Handbook for Revolution,” in response to which the Royal Ulster Constabulary raided the printers, failing to comprehend that a revolution might be a poetic rather than a Republican or Marxist one. The Ulsterman website describes the magazine as “created by the late poet James Simmons in May 1968, when Paris was teetering on the brink of revolution and Northern Ireland civil war.”

In Dublin, Keenan published in the literary magazine, Envoy, a mid-century periodical with other notable contributors, Patrick Kavanagh and Flann O’Brien. In a 2015 Irish Times profile Adrienne Leavy described Envoy as “The short-lived but influential magazine aimed to define a national cultural identity, whose enemy was perceived as native conservatism and isolationism rather than British imperialism.” Scholarly interest in periodicals have called attention to the generative output from the Republic of Ireland, Northern Ireland, and the British Isles from the last century. As Claire Connolly contends in the forward to Malcolm Ballin’s 2008 book, Irish Periodical Culture, 1937–1972 Genre in Ireland, Wales, and Scotland, “Periodicals strive for artistic permanence too: they have an affinity with the world of books, and are close cousin to the collected or uniform edition, with its claims to cultural prestige” (xi). According to Ballin,“As a ‘thing’ […] the periodical has a social and cultural life beyond the reach of any individual, group, or coterie” (xi). Periodicals serve as a cultural touchstone to Bohemian and underground communities in times of transition and upheaval. James Gallacher ushers Gerard Keenan from obscurity to endow him with a level of permanent distinction in this collection.

In the introduction, Gallacher says of Keenan, born in 1927 to a Catholic family in North Belfast, that he “felt a profound dislocation regarding his surroundings, a theme returned to several themes throughout his work” (11). One of his earliest stories, “A Disappointing Day,” written in 1946, marks his first publication in Lagan, A Miscellany of   Ulster Writing. In a letter to Anne Tannahill of Blackstaff Press, Keenan characterises his writing as “a social panorama of corner of Ulster society not often considered Ulsterish” […] more of a Bloomsbury sort of decadence disguised as farce […] this reader with see the city more clearly by having to break the code” (5).

“The Changeling” (1950), a story published in Envoy, was an important breakthrough, drawing the attention of Patrick Kavanagh, whose “Diary” entries proved influential. Kavanagh’s “entries for the magazine would come to represent the single most important influence on Keenan’s style” (21). Gallacher, a Research Coordinator for the European Federation of Associations and Conferences of Irish Studies (EFACIS) at KU Leuven, Belgium first discovered the writer “during the latter stages of his doctoral studies at the University of Liverpool” (2). “The name Gerard Keenan” he contends, “is one in large part lost to Irish literary history” (1). “Researching the development of literary movements in the bohemia of post-war Dublin” (2) led him to Kavanagh’s Weekly and eventually to a work of Northern Irish publications like the Honest Ulsterman.

“In Refugee from Mars,” a critical piece published in the second issue of Kavanagh’s Weekly on April 19, 1952, Keenan grows impatient yet hopeful in the city’s stalled theatre renaissance and looks from examples in literature from P. G. Wodehouse and Graham Greene for motivation. He declares, “Rioting is dead in Belfast and it may never return, but I think dullness will always be its destiny” (29).

Farset is an unpublished novel completed around 1953 under Keenan’s other pseudonym, Joe Biggar. According to Gallacher “an illuminating insight into the workaday culture of mid-century Belfast, the story charts Keenan’s earliest literary stirrings, plotted as they are correspondingly with pitted acts of schoolboy rebellion, a low-level subversion of a rather stygian status-quo” (32). Here, Biggar disguises literary figures and other bohemian figures from his circle within the plot in a creative project in order to fulfill the “hidden subversion and intellectual endeavors, subterranean and concealed at the Farset river, underground tributary of the Lagan” (32). Gallacher notes, “The central pseudonymisation is that of the city of Belfast itself, which becomes transformed into Farset” (5).

In Soundings, a literary anthology of Irish writing, Jude the Obscure published a short story, “Parents and Priests” (51). The story reconciled some of the difficult themes of Keenan’s childhood with a combination of bitterness and nostalgia. The narrator’s ill father suggests the boy cheer himself by look for “Tales of the Long Boy … You’ll enjoy those stories. [He] said he would and went to the library straight from the hospital but without any luck; none of the Chesterton’s was in” (56).

In Anthony Cronin, Keenan reviews the author’s Dead as Doornails, weaving the main characters, “Behan, Kavanagh and Myles, then begins to reveal the interplay between them,” clearly aligning himself with Cronin’s style, “shadowy, withdrawn, never up-staging the heroes of this tale” (70). The Sick Men of Sunday (Farset and Gomorrah) is a serialised novella first published in the Honest Ulsterman from 1977-1978. In this series, Gallacher suggests that the now middle-aged Keenan is working through the central themes of his life and relationships: “As it moves from 1950s Belfast to 1970s London, the writing becomes preoccupied with Keenan’s often fraught relationship with [Gerard] Dillon.” Their relationship is an “encapsulate microcosm of the central and arguably irreducible contradiction of Keenan’s entire career; that of reconciling his intellectual bohemianism with his sense of responsibility towards his family” (74). With his critical eye, Keenan maintained open-mindedness and tolerance of differences, remembers Johnstone in the Honest Ulsterman. About Gerard Dillon, his “attitude was impeccably enlightened” and his advocacy for women writers, citing, “One of the figures he revered most – along with Shakespeare – was George Eliot.”

In “The Business Section,” his debut as an Honest Ulsterman columnist, Keenan sets out to expose the right-wing leanings of “Kavanagh, Beckett and Myles.” He writes

[T]he three have one thing in common, that none was a worker. Kavanagh was a small farmer and professional journalist; Becket was a university lecturer; Myles was a professional man in the Administrative Class of the Civil Service […] The three were gentlemen and fitted easily into the aristocratic tradition which is one of the curses of Ireland wherein the worker is either held in contempt of is patronised. (100)

Keenan appears to have devoted his later years to fictional works including Shelley Pain, previously serialised in the Honest Ulsterman in 2000, and Gerry and Bill, an unpublished novel written between 1988 and 2000. The thirteenth selection, The Streetwalkers of Pimlico, may be the most stylistically bold inclusions in this volume. Gallacher concludes the book with an observation about Keenan’s artistic frustrations, with an eye towards another life in London. Streetwalkers “offers a languid representation of 1950s Pimlico, a world of shaded artist’s salons and hazy drunken picnics, offset always by Keenan’s parallel workaday existence as a newspaper clerk” (51). One scene in the story satirises a discussion group, the author’s account of the Belfast Labour Party. When a young woman named Della remarks on his reading of Christopher Isherwood’s Sally Bowles, the narrator remarks, “She had would have been called a salty tongue, effing and blinding about capitalism and the rich as her audience of shipyard workers cheered her on” (153).

This volume will be of interest to scholars of Irish periodical culture and history and others interested in the workings of the Belfast and Dublin Bohemian life of the twentieth.  century. Though Gallacher brings to light Keenan’s collection of critical writings, his creative work may draw new attention, whether written under his various sobriquets or not.

Leavy, Adrienne (2015). “Envoy, the literary magazine that sought to put Irish culture on the map.” The Irish Times (17 August).