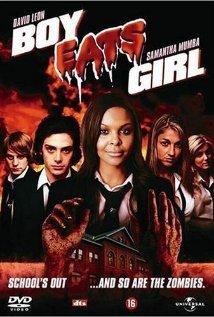 Spending just under an hour and a half watching Ireland’s California-ised youth eat itself is a pleasure. In Boy Eats Girl,directed by Stephen Bradley for Element Films, a clatter of Dublin secondary school kids, their cultural touchstones firmly located in West Coast America, discovers that every blow job counts when their classmates start biting back. The film establishes its central characters with light brushstrokes – there is the hero, Nathan (David Leon), whose mother, Grace (played by Bradley’s wife, Irish comedian Deirdre O’Kane), brings him back from the dead after she has accidentally caused him to commit suicide; school rugby bully, Samson (Mark Huberman), who causes the misunderstanding that leads to the half-baked suicide attempt after Nathan spots him apparently going down on Jessica (Samantha Mumba), and the two guileless best friends, Diggs (Tadhg Murphy) and Henry (Laurence Kinlan), who invariably catch up with what is going on two seconds after it has happened. The trouble, as you might expect from an Irish movie, starts in a Church when Grace stumbles across a book of curious imprecations lurking under the altar. Without realising that an all-important page is missing, she quickly puts together some hokum and reanimates her beloved Nathan, soon to cause havoc when he exacts his revenge on Samson’s neck. Before you can say ‘yum’, half the class is tucking into the other half and only the inevitable small group of survivors is left to defend itself and wait for the arrival of an antidote.

With its cast of pampered youngsters, its anodyne school buildings and its hierarchy of privilege, Boy Eats Girl knowingly recreates the iconography of the American teen-pic. Moreover, the kids all have the kind of names you might just as easily hear in a Hollywood production. This effect was, the director has said, a deliberate commentary on contemporary Irish life: ‘the only ambition we had for the film to be taken seriously as a theme was to have the idea that, with the Celtic Tiger and all of that nonsense which has come over the last ten years, we have all sucked up that huge amount of Americana, and this film shows how much we have.’ Casting Samantha Mumba in one of the central roles further connects the film to the new Ireland, though as the bearer of the film’s most excessive display of wealth – her stinking rich and overbearing (white) father owns a large suburban home complete with riding stables – this is more the new Ireland of Louis Walsh and global pop stardom than of racial dispossession. The production’s other most immediate influence is the low-budget British genre film, notably Shaun of the Dead (2004). In common with the latter, Boy Eats Girl is primarily a comedy, but with less of the self-referential knowingness of recent American horror films, such as the Scream series of 1996 onwards. This didn’t prevent the film from running into trouble with the Irish film censor who refused certification unless the scene depicting the ostensible suicide attempt was cut. The issue went to the Appeal Board who unanimously reversed this decision and the film was released with a 15A certificate.

Boy Eats Girl is not Ireland’s first ‘romzomcom’. Late in 2004, Conor McMahon’s Dead Meat laid claim to that title when it opened in Ireland. A grungy, ad-hoc production, made under the Irish Film Board’s microbudget initiative (which provides funding for projects budgeted at under €100, 000), Dead Meat’s premise is that one day the bovine population of Ireland will turn on the humans who have so insensitively infected them with Mad Cow Disease (BSE). Their victims, mostly from the Co. Leitrim area, are instantly rendered zombies and cluster in roadside bands, alternatively consuming fresh kills and stalking the living. A less polished production than Bradley’s better-financed release, Dead Meat more obviously straddles the otherwise conflicting traditions of an older generation of Irish filmmakers and the new brash commercialism of its younger digital successors. The attack, it is suggested, may not just reflect the revenge of the cows, but have its roots in a much darker history, as its male lead, Des (David Muyllaert) relates to the young woman, Elena (Marián Arújo), who becomes his companion in the battle against the zombies. This is the area in which Cromwell hung fifty men and children; it is also a countryside dotted with ruined churches and round towers, symbols of an abandoned culture and religion. In such a landscape, the wandering bands of starving, homeless country people could easily be mistaken for famine victims come back to haunt the present. At the same time, McMahon’s perspective is resolutely metropolitan, viewing the countryside as the locus of an unspeakable horror.

By contrast Bradley’s film, for all its parodic intent, is equally a celebration of a new globalism. We have suburbs, the film declares, just like everywhere else, and a rock scene (the soundtrack features a selection of rising Irish bands such as Bell x1) with international appeal, and a youth population that dresses and talks in the idiom of teen TV. Our kids are obsessed with sex and its substitutes, and how they look and what they wear, just like teens in all rich Western countries. We make genre films like everyone else’s. Given that Bradley’s previous film was the 1998 release, Sweety Barrett, a quirky, somewhat fey re-shaping of the gangster drama to fit into a background of small town, coastal Ireland, the distance he, and the aspirations of Irish cinema, have travelled are immense. Invariably when local filmmakers make films that aspire to global status, they leave themselves open to comparisons and Boy Eats Girl found as many detractors as admirers in local press reviews. Does it hold its own in Zombieland, or is it just a good Irish attempt at doing what other film cultures take for granted? Rather more the latter, I would say.