by Colin Ireland. This text may be archived and redistributed both in electronic form and in hard copy, provided that the author and journal are properly cited and no fee is charged for access. 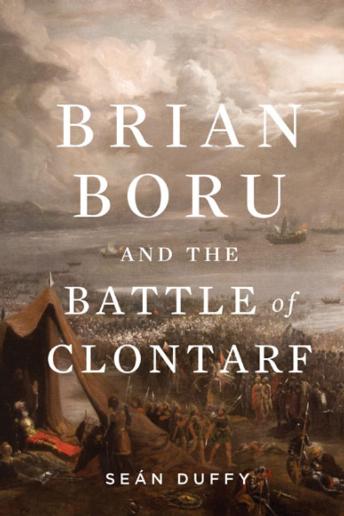 Brian Bóraime (anglicized as Boru) is one of the most intriguing figures from Irish history and, although plenty of legend has accrued to him, he is remembered as the single Irish king to most successfully unite the island of Ireland.   The pivotal battle for which he is most famous, the Battle of Clontarf (Cluain Tarbh “bull meadow”), now a comfortable suburb of modern Dublin, has become iconic in Irish nationalist history and is considered Brian’s greatest success despite the fact that he did not survive the conflict.  Our stereotype of this battle fought in 1014 has the Vikings of Dublin, allied with certain Leinster families and armies and fleets of Vikings from abroad, in conflict with Brian and his Irish alliance, including some Viking kingdoms, gathered because of his success as “emperor of the Irish”.  This informative and entertaining volume is very well written and leads the reader gracefully through the intricacies of Brian’s family background, through his personal life and into his public, political career that shaped so much of tenth- and eleventh-century Irish politics and international relations.  In order to recreate this complex picture for us, the author must use a rich array of original sources including Irish chronicles and annal entries, as well as sources from abroad, such as Welsh and English chronicles and sources from the continent.  One of the most contentious of the original sources is the propagandistic Cogadh Gáedhel re Gallaibh “The War of the Irish with the Vikings” written at least a century after the events it depicts.

Brian’s rise to power and fame would not be predictable from his family background.   Until his time the Irish polity had been dominated by extended family groups referred to as the Uí Néill who can be divided into northern divisions (Cenél Conaill and Cenél nÉogain) and southern divisions (Clann Cholmáin and Síl nÁedo Sláine) with these two southern groups occupying the Irish midland territories of Mide and Brega.  The dominant extended family in the south of Ireland were the Éoganachta who had themselves always been overshadowed by one or the other of the Uí Néill groups.  At the time of his birth, the extended family to which Brian belonged, Dál Cais, would not have seemed to hold any prospects for someone with ambitions on an Ireland-wide scale, let alone to have his influence extend beyond the island.

The author leads us through the tenth-century intricacies of his family background and the achievements of his father Cennétig (74-81) and his brothers Lachtna (82) and Mathgamain (82-91).  We know that his mother was Bébinn (74-5, 93), daughter of Aurchad mac Murchadha, king of Iar-Chonnachta.  An interesting aspect of his immediate family background is the unusualness of his personal name.  Until his own time Brian is seldom recorded as a personal name, but since his time it has become one of the most common Irish names and has spread worldwide because of its popularity in the English-speaking world (93-5).

We know the names and something of the background of four of his wives, and nine of his children can be traced in the records, six sons and three daughters (99-102).  His wife Mór was from a south Connacht family, Uí Fhiachrach Aidne.  His sons with her were Murchad, Conchobar and Flann.  Another wife, Gormlaith, is very famous in her own right and deserves separate study (e.g. 99-102, 170-71).  She had in the course of her lifetime three powerful husbands (234).  One of them, besides Brian, was Amlaíd Cuarán, a king of Dublin whose son, Sitruic, was a key opponent of Brian at the Battle of Clontarf.  Gormlaith’s brother, Máelmórda mac Murchada, was a king of Leinster and a powerful rival of Brian and an opponent at the Battle of Clontarf.  Donnchad, Gormlaith’s son with Brian, became Brian’s successor after the battle.  A third wife, Echrad was of an obscure family the Uí Áeda Odba.  She bore Brian a son named Tadc.  A fourth wife, Dub Choblaig, was the daughter of Cathal mac Conchobair, king of Connacht.  Of Brian’s three daughters, Sláine was married off  to Sitruic, king of Dublin; Sadb was married to Cian of the Éoganachta Raithlind in Munster; and Bébinn (named after Brian’s mother) was married off to Flaithbertach of Cenél nÉogain in Ulster.  Brian’s own marriages, and the marriages of his daughters, give a very clear sense of the practice of strategic marriages to attempt to create alliances and cement relationships.  It is very rare in the history of Western Europe to be able to trace so thoroughly the personal background of a figure who lived over a thousand years ago.

One of Brian’s early rivals was Máel Sechnaill, king of Tara, and a member of the Clann Cholmáin branch of the southern Uí Néill.  At the start of Brian’s career, Máel Sechnaill would have been considered the most powerful king in Ireland.  Among Brian’s great achievements is the fact that he not only superseded Máel Sechnaill in political and military power, but successfully co-opted him as an ally in the later campaigns that saw Brian achieve the status, by 1002, as the most powerful king of Ireland with Máel Sechnaill as subordinate.  This was achieved largely through what is known as the Bleanphuttoge Accord of 997 (116-9) in which Brian and Máel Sechnaill agreed to split Ireland north and south between themselves.  But Brian soon out-manœuvred Máel Sechnaill, making him subordinate through battle, but eventually gaining his fealty.

One way for Brian to gain island-wide political control was to engage the power of the church at Armagh which, as the see of St Patrick, claimed ecclesiastical primacy throughout Ireland.   By linking his political and military power to the ecclesiastical influence of Armagh he helped control rivals such as the Cenél nÉogain of the northern Uí Néill.   Sometime between 1005 and 1012, he was enrolled into the Book of Armagh, a ninth-century dossier documenting the importance of St Patrick, in the presence of his spiritual advisor, Máel Suthain (Calvus Perennis) as imperator Scotorum “emperor of the Irish”,  the first time such a title had been recorded for any Irish king.  It was also truer of Brian than of any previous Irish king.  He came closest to uniting the entire island under his single kingship.  Brian was by this time advanced in age, perhaps in his seventies, although estimates vary because his birth date is uncertain.

The Battle of Clontarf (1014) is the one event in Brian’s career that has shaped his reputation in subsequent Irish historiography and legend.  As noted above, the author has drawn on a broad array of original sources to recreate the alliances and political strategies of the participants.  Because the battle is so important in Irish history, it generates much debate and controversy from historians.  This work cannot pretend to have found all the answers and solved all the dilemmas, but the author argues so lucidly that any reader will come away with a clear sense of what the options are in the vast arguments accruing around these momentous events.

Surprisingly, the Annals of Inisfallen, which can be assumed to have had a southern bias in favour of Brian, offer the most succinct entry concerning the Battle of Clontarf of all the Irish annals (174-7).  The Annals of Ulster, by contrast, fill out the details and have a tone that favours Brian and his efforts (177-98), despite that fact that he was killed at the end of the battle and did not survive to implement further the unification of Ireland under a single king.  Duffy argues that the favourable tone of the annal entry may be the result either of the ecclesiastical bias generated from Armagh, or the entry may have drawn on information found in the Cogadh Gáedhel re Gallaibh (179).  Interestingly, the later Annals of Loch Cé expand the number of Norse fighters and imply that the Dublin Vikings along with their Leinster allies were joined by Viking fighters from the Orkneys, Hebrides, and other areas in the Irish Sea region and in Britain.  It would appear that a lot of the myth making began to appear early and continued apace.

A “high-kingship” over all of the island of Ireland was never more effectively achieved by any king except for Brian.  When we examine the “high-kingship” as practiced previous to Brian, one would assume that an Uí Néill contender would have been the most likely candidate.  For that reason alone, Brian Bóraime is all the more interesting and important in early Irish history.   Seán Duffy leads his readers lucidly through the complications of the early sources and, while not all historians will agree with his analyses, he has cast a beacon of light where formerly there had been darkness and shadow.