by Lionel Pilkington. This text may be archived and redistributed both in electronic form and in hard copy, provided that the author and journal are properly cited and no fee is charged for access. 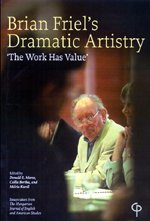 From Skibbereen to Seattle or Surrey to Saskatoon you are almost certain to encounter, somewhere, the writings of Brian Friel. Whether as a forthcoming play in production, part of a university or secondary school English Literature syllabus, or in the drama section of the local bookshop, for the contemporary English-speaking world the work of Brian Friel exercises a formidable cultural appeal. Friel’s attraction lies in the persuasive accessibility of his narratives: in particular, the neo-naturalistic theatricality with which Friel’s writing deals with a widely shared transnational experience, the impact of capitalist modernity on a traditional society. Moreover, the sheer extent and prodigousness of Friel’s writing –since the late 1950s 2 short story collections, 24 original plays and 7 adaptations– means that his work comprises a cultural history of contemporary Ireland. It chronicles, that is, some  of  the effects of Ireland’s transition from a political system based on ideas of economic independence  and  national unity in the early 1950s to what is now its much-trumpeted orthodoxy: a consumer and profit-oriented export economy based on low personal tax, lower corporate tax, down-graded public services, and massive multinational inward capital investment. From the beginning, Friel’s work tends to concede –albeit elegiacally and occasionally scathingly–the absolute inevitability of this transition. Ireland’s surrender to late capitalist modernity is registered regrettable (‘We are no longer even West Britons’, Friel wrote in 1972, ‘we are East Americans’), but also as a philosophical and emotional necessity. The young male protagonist in Philadelphia, Here I Come! (1964) feels compelled to emigrate from County Donegal not so much for economic reasons but in order to reconcile his public and private self; at the end of Translations (1980) the audience is left in no doubt as to the necessity of adopting English as Ireland’s vernacular because this is part of the inexorable process of modernization from which the only escape is retaliatory violence and republican irredentism. Again in Dancing at Lughnasa (1990) we are left with the sad incommensurability of modernity and the traditional, broken world of the Mundy sisters. Characters’ efforts at resistance either are ostentatiously ineffectual or exacerbate their subjection. To no small extent, therefore, an understanding of Friel’s literary achievement is a project very closely bound up with how we in Ireland understand ourselves.

Extracted from the Hungarian Journal of English and American Studies, Brian Friel’s Dramatic Artistry is a collection of 14 critical essays that deal with the full corpus of Friel’s drama, from early plays like The Gentle Island and Philadelphia, Here I Come! to later and more recent works such as Wonderful Tennessee and Performances. The collection also contains an interview with Richard Pine, author of an early monograph on Friel and a champion of a religio-philosophical approach to Friel’s work. Subtitled somewhat defensively ‘The Work has Value’, the coherence and consistency of Brian Friel’s Dramatic Artistry lies in its reiterated emphasis on the ontological depth of Friel’s writing and the need for close textual analysis. With very few exceptions (notably Michael Parker’s essay on politics and sexuality in The Gentle Island), this is a collection that is hostile to political and historical readings of Friel’s plays.

Notwithstanding this substantial constraint, Brian Friel’s Dramatic Artistry is a remarkable achievement. It brings together a range of well-written essays and is rigorous throughout in its detailed and unanimously appreciative studies of Friel’s oeuvre. Thus Csilla Bertha and Donald Morse’s useful study of artist figures in Crystal and Fox and Wonderful Tennesseerelates Friel’s conception of the artist as diviner to the traditional Irish figure of the storyteller or seanchaí. Similarly illuminating is Giovanna Tallone’s close textual study of Faith Healerand Crystal and Fox. Tallone notes the way in which both plays reflect Friel’s ambivalence to his craft: his view of theatre as adumbrating a potentially powerful utopia that is presented at the same time as on a par to the illusions of charlatans and mountebanks. The fit ups or travelling shows alluded to in Crystal and Fox and Faith Healer, Tallone avers, are both ‘remnants of a lost tradition’ of mumming and ‘the symptoms of a deeper disquietude.’ What they reveal is Friel’s preoccupying interest in the idea of the artist as liar and the idea of the artist as a transforming magician. For Ger FitzGibbon, in an outstandingly nuanced reading ofPhiladelphia, Here I Come!, Translations and Dancing at Lughnasa, Friel’s ambivalent view of theatrical representation is both a thematic and structural feature arising from Friel’s belief in the ‘hermetic seal of individual existence’ and in the individual’s even more compelling desire to deny or escape this existential isolation. Certainly, as FitzGibbon argues, Friel’s plays suggest that language distorts privacy and theatrical performance is a masquerade, but these plays also suggest that alternative and more effective modes of communication lie in the wordless possibilities of music, dance and ritual. Complimentary to FitzGibbon’s essay is Richard Allen Cave’s examination of the moving body in Dancing at Lughnasa andWonderful Tennessee as a study of the nature and function of ritual in contemporary life. Like Richard Pine, Cave views Friel’s involvement with Field Day in the 1980s as a regrettable restriction, temporarily limiting Friel’s ability to explore the ‘private metaphysical quest of individuals’.

Close attention to language and to the numinous aspect of dance, music and stage movement in Friel’s plays is a consistent and praiseworthy emphasis in this collection. Thus Christopher Murray’s thoughtful reading of Translations argues that Friel’s play may be considered as a palimpsest of an older nationalist and Irish language tradition. Not only do the stage conventions of Translations evoke an impression of two languages as one, but the play’s thematic concern with translation as adaptation serve to dramatize the process of palimpsest itself. That the rubbing out and writing over of another language is a crucial feature ofTranslations is reiterated in Márton Mesteházi’s short essay on the difficulties of translating this play into Hungarian. Instead of drawing attention to the radical semantic differences between two languages (a project to which Friel is opposed in Translations), Mesteházi rendered the play’s Hiberno-English expressions –’Be Jasus’, ‘footering about’, etc– in terms of rural Hungarian idiom: easy to understand but with a definite flavour of the still-to-be-modernized countryside.

There is an advantage, therefore, to the somewhat stern anti-political approach that is adopted either implicitly or explicitly by the vast majority of essayists in this volume. It facilitates a consistently detailed attention to the complex texture of Friel’s plays, to the intertextuality of the plays as a whole and to their relationship to broader theatrical and cultural traditions. Donald Morse, Csilla Bertha and Mária Kurdi are to be congratulated for producing an extremely well-edited collection of searching and appreciative essays. Brian Friel’s Dramatic Artistry will make a substantial contribution to Friel criticism and to Irish theatre studies.