by Claire Bracken. This text may be archived and redistributed both in electronic form and in hard copy, provided that the author and journal are properly cited and no fee is charged for access. 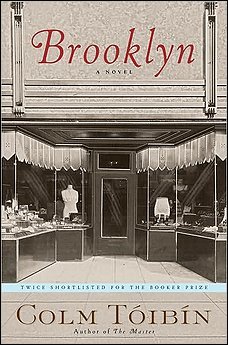 Colm Tóibín’s Brooklyn tells the story of Eilis Lacey, a young Irish girl who emigrates from Enniscorthy, Wexford to Brooklyn, New York in the 1950s. The narrative begins in Ireland, as we are introduced to the very shy and retiring Eilis, who lives with her older sister Rose and elderly mother. Eilis’s family is one marked by death and emigration; her father died a few years previously and her three brothers have all left for work in Birmingham. Jobs are scarce in the depressed economy of 1950s Ireland and Eilis, finishing a bookkeeping course, is struggling to find work. Her only option is a Sunday job in the shop of autocratic Miss Kelly, whose lashing tongue softens only for customers perceived to be of the “right” social standing. Rose’s pride in her sister, her desire for her to succeed and be treated with the respect she deserves, brings about a change in the narrative direction, as she sets in motion the wheels for Eilis’s emigration. The passivity of Eilis’s character in responding to this momentous and life-changing event generates real pathos in the story, as the reader is brought into contact with her unarticulated fears and repressed anxieties: “Even when she woke in the night and thought about it, she did not allow herself to conclude that she did not want to go” (30). However, go she must; Eilis embarks on a week-long, sea-sick journey across the Atlantic, arriving to her new home in Brooklyn, New York. Father Flood, an acquaintance of her sister Rose, has set Eilis up in employment as a shop assistant in the department store Bartocci’s, and has her housed in an Irish boarding house. After an initial period of cultural climatisation, Eilis begins to settle in and get used to her new surroundings and the narrative poignantly portrays her subjective development, as she navigates the different social and cultural terrains of 1950s post-war US society. Spanning just under two years, Eilis’s time in Brooklyn facilitates her engagement in various sorts of friendship making (and breaking), church dancehall events, bookkeeping classes at Brooklyn College, and beach trips to Coney Island. She also falls in love. However, family events in Ireland require Eilis to return and the concluding sections of the narrative raise questions regarding what constitutes “home” in the emigrant imaginary.

Like Tóibín’s Henry James in his 2004 novel The Master, Eilis is constructed as a restrained character, guardedly watching life around her as it unfolds. The third person narrative is restricted to her viewpoint. Through this narrative device the reader gets insight into the dynamic relations between observation and act, thought and material reality. From the outset, Eilis is configured as a spectator in her own life, reflecting on herself, others and external situations. The opening line, holding resonances of the beginning of Joyce’s short story “Eveline”, reads: “Eilis Lacey, sitting at the window of the upstairs living room in the house on Friary Street, noticed her sister walking briskly from work” (3). The narrative establishes a specific philosophical relation between action and reflection, as Eilis responds to the happenings of her life, particularly her new life in Brooklyn, in terms of the need for contemplative space: “She could not wait to be alone, away from him, so she could contemplate what he had just said” (148). Letters function in the narrative as the means through which the immediacy of material reality is re-packaged via thought, as Eilis reflects on her new world to her family at home: “She began to take note of all the details, thinking … how she could include an account of them in a letter to her mother and Rose” (79). However, the directional relationship of happening leading to reflective thought is not only one-way. Rather, thought is also constructed as preceding the actions of material reality. As Eilis notes on her return to Enniscorthy and her family home: “she knew that her mother had been planning this moment when they would both stand in this doorway” (211). The novel repeatedly and insistently constructs this two-way relationship, thus demonstrating the way thought is embedded in the material reality it apprehends, innovatively configuring the materiality of thought itself.

However, it is not just the materiality of thought that the novel seeks to articulate, but also the materiality of society and social life. One of the extraordinary features of this novel is its skill in historical recreation. The textures of 1950s culture, in Ireland and the US, are made vitally present throughout, facilitated through detailed representations of material culture, particularly consumer objects. These objects are presented as active forces in the production of cultural meaning. This is particularly evident in a scene where Bartocci’s, the Brooklyn shop where Eilis works, introduces “Red Fox stockings”: “Coloured people are moving into Brooklyn, more and more of them … We’re going to welcome coloured women into our store as shoppers. And we’re starting with nylon stockings. This is going to be the first store on this street to sell Red Fox stockings” (114). The material object of the nylon stocking functions here to reflect “the change going on outside the store” (114), while also actively participating in that change, by enabling shifts in the power and class structures of race relations. The material object is shown to have force in the actual enactment of social change.

On one level the insistence on materiality works to make this beautifully wrought novel of the 1950s immediately vital and alive for the reader. However, it also functions to rework dominant conceptualizations of the material as passive object. The danger of such a conceptualization is poignantly drawn through the character of Eilis. After asking Father Flood why he helped her in the emigration process, she is told that “we need Irish girls in Brooklyn” (81), thus positioning her as an object of exchange between cultures. Just like her letters, she crosses and re-crosses the Atlantic. The tragedy of her story lies in her positioning by others as an object with no power. Brooklyn works to caution against such pacification of what is constituted as material, functioning as a critique of the objectification of bodies, particularly women’s bodies, in a consumerist culture, something which speaks not just to the past but also to the present day. Furthermore, by intersecting consumerism with an emigrant narrative, the novel interrogates the construction of emigrant bodies as passive material objects that provide sustenance to the nation in which they arrive. Brooklyn reworks such cultural constructions through a powerful first-person narrative, which renders the material vital, energised and alive.