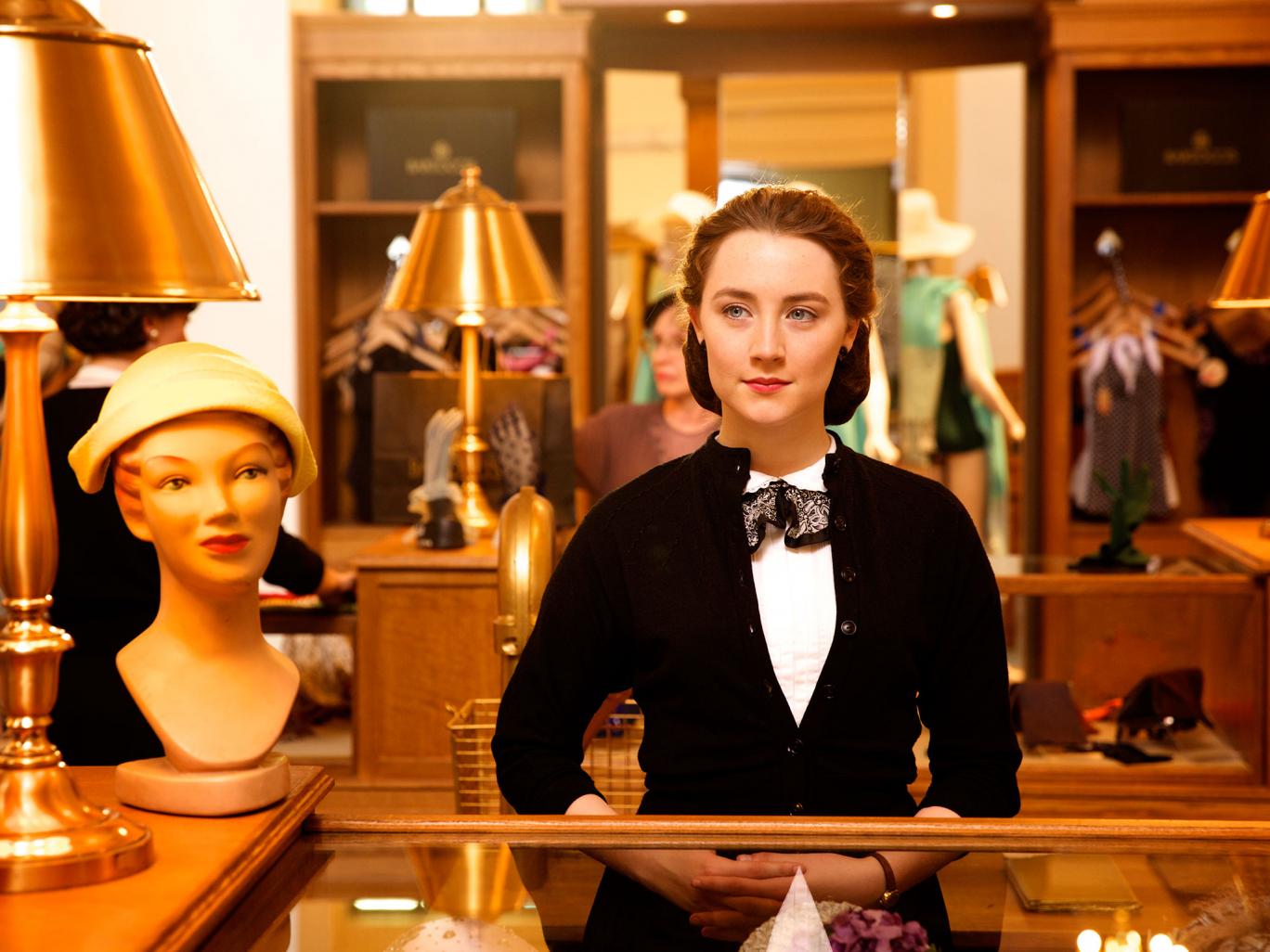 In her 2004 Irish National Cinema Ruth Barton codified the notion of the Irish Heritage film, referring to a cycle of 1990s Irish productions which she described as characterised by “a nostalgic, Edenic view of Ireland”. Though these films were primarily set in the 1950s, Barton argued that they describe an Ireland of the present, distinguished by its ‘pastness’. Barton describes this as a feature of rural Irish films drawing on a British tradition of the heritage film, emphasising a fantasy of innocence and whimsy, the appeal to a rural past and a touristic future now the most recognised manifestation of the genre in an Irish context. She concludes her thesis by arguing that ‘Ireland’s recovered history is metonymic for a universal loss of innocence, displacing its function as locus of heritage nostalgia’ (Barton, 149-56).In that respect is it striking that one reviewer – Mark Kermode in the Observer (Sunday 8th Nov. 2015) – wrote of Brooklyn that it “beautifully evokes the sense of being torn between time, place and identity. In Ireland, Eilis is a daughter with a history; in America she is a woman with a future; in both she is filled with displaced longing’.

Brooklyn is arguably the most internationally successful – both critically and financially – indigenous Irish film since John Carney’s Once. Empathetically adapted by Nick Hornby from Colm Toibín’s novel, it tells the story of Eilis (Saoirse Ronan –the ‘Maureen O’Hara for a new generation’), a young woman from Enniscorthy, County Wexford who emigrates to America where she hooks up with Tony (Emory Cohen), a Brooklyn plumber, neatly fulfilling the romantic drive of such a melodramatic narrative.

What a moving, emotionally intelligent and refreshingly old-fashioned movie this is. The narrative may be perfectly situated in the early ‘50s, but the style of filmmaking harks back further still, to a time when “women’s pictures” were the backbone of popular cinema.

Other reviewers have emphasised its appeal in promoting a surfeit of ‘feel good’ nostalgia and a solid sense of place and time while tapping into the perennial emigrant condition – initial feelings of loneliness and isolation, followed by adaptation and the assimilation of the emigrant. As Glenn Kenny’s review for rogererbert.com (Nov. 4th 2015) explains that Eilis is “terribly vulnerable”:

In the film she has a beloved mam and older sister (the adaptation excises the older brothers in the novel) and once ensconced in a quasi-boarding house in a nicely brownstone-and-tree-rich neighbourhood of the New York borough to which she’s sailed, she misses them terribly.

The filmic result is clearly director John Crowley’s most successful picture since 2003’s unexpected punchy Intermission. Elsewhere, I have suggested that Intermission can be considered as Ireland’s first “smart movie” (Brereton 2012: 104) and as such represented a significant development in terms of how Irish filmmakers sought to appeal to contemporary audiences. By contrast, Brooklyn is formally safer, suggesting a reversion to more established generic and commercially fine tuned material.

In this regard it is worth recalling that while Intermission was one the most commercially successful films Irish Film Board funded films, taking over €2.3m at the Irish box office, it did not repeat this feature on the other side of the Atlantic. When finally released in March 2004 by the Independent Film Company, it opened in only 10 theatres in America, taking a paltry $39,540 in its opening weekend.

Brooklyn in contrast has become a major commercial success earning over €32m in the US by February 2016 (and a further €8m in the UK and Ireland).

Irish film scholars have drawn attention to prior over-use of mythic excess in similar Irish films seeking to appeal to an American/diasporic audience, suggesting that they often collapse “into a kind of historicist nostalgia” through their “essentially regressive ideologies” (McLoone 2000: 120). Such criticism might more accurately speak to an earlier foray into Irish émigré territory, Jim Sheridan’s In America. That film received mixed reactions in this vein, criticised as over-sentimental with a sometimes confusing narrative logic. Brooklyn has learned from such dangers, and the resultant film is much more cohesive and engaging for mass audiences, adapting a coherent narrative and structure (drawn from original, successful novel).

Nonetheless, while relatively faithful, the adaptation adds a sequence of Eilis returning to America and re-igniting her marriage, perhaps reflecting the screen medium’s demand for narrative closure. Similarly the sequence illustrating her first entry into America, magically appearing on the other side of Ellis island, is not included in the novel, but echoes Sheridan’s penchant for mythical and magical excess. Having endured a difficult boat passage, Eilis is witnessed almost literally ‘going into the light’, emerging through a portal into the utopian space of America.

All emigrants must confront the tension between maintaining one’s indigenous cultural identity, and the pressure to integrate/assimilate into the host society. This transition is managed by memorable yet archetypical support roles, most notably Mrs Kehoe (Julie Walters), Eilis’s protective land-lady who maintains a hilarious distain for ‘giddiness’. She is augmented by Jim Broadbent’s Father Flood, an utterly benign priestly presence who assists Eilis to integrate. (There is no hint here of the trauma of child abuse or other forms of religious discontent commonplace in recent Irish filmic portrayals of the religious, such as Calvary).

Like In America or The Quiet Man, Brooklyn represents a celebration of an Irish-American encounter, the struggle to find acceptance, and secure a new and alternative family. Such a trajectory is frequently coded as conservative, in the ideological and sentimental readings of a Fordian or a Spielbergian aesthetic for example. For instance In America serves as an artefact of Irish-American expressions of identification and constructing a dialogical chain of equivalence, where America is in some ways the ‘empty signifier’, linking optimism, emancipation, opportunity, redemption, universalism, multiculturalism, magic and progress, while ‘Ireland’, is metaphorically chained to signifiers of loss, death and ‘the emotional wounds of a past sorrow’ (In America, DVD 2004).1 Meanwhile, one could argue that Brooklyn is more progressive, or at least more optimistic, in permitting the migrant to contemplate a return to Ireland – a possibility that is seldom if ever afforded in earlier Irish émigré tales. The novel usefully addresses this issue by suggesting that the experience radically changes the migrant, rendering them less timid or insular and more confident and appealing – even employable – as a consequence.

By contrast with the sepia-tinted visual palette, the use of indigenous sean nós music emerges as the film’s most authentic feature. Diegetic music plays a storytelling role throughout the film, with the new verses and old choruses of Eilis’s life rehearsed amid contrasting dancehall scenes. In a truly sublime sequence that echoes the raw poetry of The Pogues’ Christmas classic, “Fairytale of New York”, Eilis is seen serving a communal Christmas dinner to the downtrodden men who “built the tunnels and bridges” of New York. Similar stories of manual labour are evident in Irish communities in London and elsewhere. One of the unsung migrants (played by angel-voiced Iarla O’Lionaird) stands up at the party to sing the traditional Irish love song ‘Casadh an tSugain’. The scene evades cheap sentimentality by dint of the sheer emotional purity and lyrical engagement of the music. [In the original novel (Viking/Penguin 2009: 90), Toibin paints a rich picture of the scene: “His voice was loud and strong and nasal; the Irish he sang in, she thought, must be Connemara Irish because she remembered one teacher from Galway in the Mercy Convent who had that accent. He pronounced each word carefully and slowly, building up a wildness, a ferocity, in the way he treated the melody. It was only when he came to the chorus, however, that she understood the words – ‘Ma bhionn tu liom, a stoirin mo chroi’ – and he glanced at her proudly, almost possessively, as he sang these lines. All the people in the hall watched him silently.”]

Wisely, Crowley allows O’Lionaird’s voice to ring unaccompanied before Michael Brook’s orchestration takes over, while focusing on a montage of silent faces offering fleeting portrait of homes left and loves lost. As a seminal and iconic Irish audio-visual image of exile, this is amongst the most memorable across the whole history of Irish cinema.

In a materialist and broadly secular Western culture, the need for some form of identification and belief in the benevolence of human nature, alongside creating strategies to cope with emigration, loss and even bereavement remain paramount. Given this it is perhaps unsurprising that a text which at one level is a generic émigré/heritage film has nonetheless succeeded in winning audiences in the US, speaking to and for the deeply held emotions of a diasporic Irish population who have made America their home.