Coffin Ship: Life and Death at Sea During the Great Irish Famine

Coffin Ship: Life and Death at Sea During the Great Irish Famine

by Mark G. McGowan. This text may be archived and redistributed both in electronic form and in hard copy, provided that the author and journal are properly cited and no fee is charged for access. 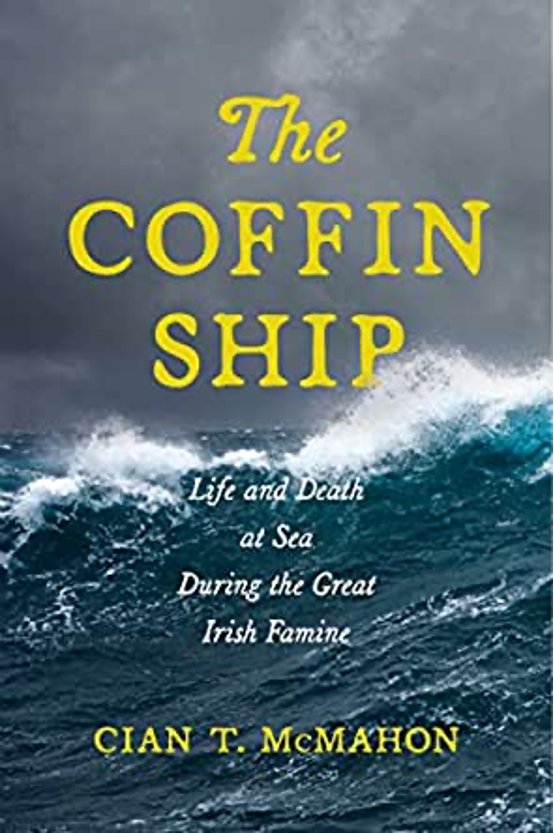 It is not often that a book is published and immediately it is adopted as part of a course syllabus for students (in this instance, my students at the University of Toronto). Such is the case with Cian McMahon’s masterful book that contributes greatly to the growing historiography of the great Irish Famine. Perhaps one of the principal strengths of McMahon’s work is his ability to engage the historiographies of the Famine in Ireland, the United Kingdom, North America, and Australia so effortlessly and in elegant prose. Too often historians have done excellent microstudies of the Famine, but without much of an eye to how their work might engage the broader studies of the Famine in other geographic locales. Too often we are treated to excellent studies of particular Irish estates and assisted migration, but lose a sense of what actually happened to these travellers after they boarded vessels in Cork, Limerick, Derry, Sligo, or Liverpool. Sometimes it is as if they journeyed to join some faceless masses or simply just fell off the edge of the world. On the other hand, many North American-based historians have produced some excellent urban-based studies of the Famine Irish, but without much of a sense of from where or how these persons came. The “coffin ship” is assumed to be the mode of travel and death, and having read this book, I suspect incorrectly.

McMahon quite literally fills in a gap that has been much taken for granted by scholars of the famine: the oceans themselves, and the lives of passengers who could be at sea for six weeks or more if their destination was North America, or six months if it was Australia. While the book reveals that there were notable cases of horrific conditions on board ships, accompanied by high mortality of passengers and crew, McMahon is careful to point out that the “coffin ship” is too broad a category, and a misleading one, when examining Famine migration. In fact, he discusses how mortality rates were actually lower than has been assumed, and that the huddled masses who embarked on these journeys from 1846 to 1855 had more agency than credited to them by historians. One must not see the repeated violations of the Navigation Acts, during the British North American sailing season of 1847, as a measuring stick for all maritime passenger travel during the Famine years.

Based on very thorough mining of primary sources in archives on three continents, and online collections such as DIPPAM (Documenting Ireland: Parliament, People, and Migration), McMahon structures his book like a voyage itself – preparation, embarkation, life, death, and arrival. The two most ground-breaking chapters are “Embarkation” and “Life.” In the former, Mahon maps out the various strategies used by the migrants themselves to make choices as to when and where they were travelling. Irish people are seen as information gatherers, using family connections, tapping pervious migration chains, soliciting emigration societies, reading emigrant guidebooks, and learning the rules and rights of travellers. They negotiate the best deals for themselves, and many are clear as to where they are headed and to whom. While McMahon acknowledges that there were landlord-assisted schemes, government assistance, and the involuntary migration of convicts, this chapter breaths considerable life into the Famine migrant as possessing agency, thus challenging better-worn tropes of victimisation.

Much the same could be said of the “Life” chapter in the way it brings to the fore the social life, celebrations, culinary experiences, cultural, and religious aspects of life at sea. While people do experience illness, and some die, what is emphasised here is the day-to-day life of passengers, a social history of those Irish who were experiencing life on the open ocean for the first time in their lives. Music and dancing are not necessarily the first things that come to mind when pondering what life may have been like on a voyage in the Atlantic or Indian oceans during the 1840s and 1850s, but they emerge here as significant elements of the experience.

The book is not without some problems. The chapter on “Death” leads off with a quotation from Michael Collins, the contemporary novelist and ultra-marathon runner, who makes a comment that is either taken out of context or based on facts that Collins has misinterpreted (146, 154-5). Most Canadian historians accept, with significant statistical evidence to support it, that one fifth of those Irish who left UK ports in 1847 did not ring in the new year in 1848. McMahon is correct in saying that far fewer died at sea or in quarantine that what this figure suggests, but those who cite it are also including the deaths in the Quebec Marine Hospital, Point St-Charles (Montreal), shed in Kingston, Bytown, Toronto, Hamilton, and Niagara, and points in between. When these places of sojourning are included, the figure Collins cites stands.

The book also repeats the now-disproven notion that Major Denis Mahon evicted tenants in 1847 and sent them to their deaths in Quebec. Here the confusion may well be in Father Browne’s list, published in the Freeman’s Journal in 1848, where he mixes the assisted tenants with the evicted ones on Mahon’s estate. The 1,490 assisted migrants from Strokestown were given the choice to leave. In exchange for the surrender of their tenancies and termination of their leases, Mahon provided cancellation of the rent debt, compensation for crops and chattels, carts of provisions, and free passage to Quebec via Liverpool. While deaths on board the four ships used to transport them to Quebec were staggering, when the death records at Grosse Ile are matched with records from Mahon’s own estate – and it is understood that not all passengers on the Virginius, John Munn, Naomi, and Erin’s Queen, were from the estate – the mortality rates of “the 1490” were less than the general tally for the ships. The death rates were still higher than the seasonal averages calculated by the author, but the deaths were the result of an outbreak of typhus on each vessel, due in large part to the poor work done by the Robinson Brothers shipping agents, and the lack of perspicacity by port officials in Liverpool, who allowed the ships to sail. Port emigration officers such as Richard Lynch at Limerick, for example, were key to safe conditions on board ship. In 1847, ships departing Limerick for Quebec had the lowest rates of mortality for all UK ports.

I want to add, however, these specific criticisms are minor irritants to scholars of the Famine migration to Canada and should not detract from the overall importance or quality of this book, and its great contribution to Famine scholarship. This semester, my own students in Irish history will be beneficiaries of the tremendous research and myth-breaking offered to us by Cian McMahon in his Coffin Ship.