by Melania Terrazas. This text may be archived and redistributed both in electronic form and in hard copy, provided that the author and journal are properly cited and no fee is charged for access. 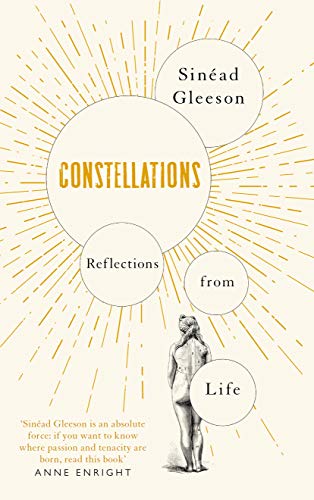 Constellations: Reflections from Life, a first book of personal essays by the Irish Book Award-winning writer, editor, book and music reviewer, and freelance broadcaster Sinéad Gleeson, is one of those narratives about the fe/male body in pain and struggling for recovery that never leaves the reader indifferent. From Jean-Dominique Bauby’s The Diving-Bell and the Butterfly (2008), which records his ability only to move one eyelid after suffering a massive stroke, to Susannah Cahalan’s Brain on Fire (2012), which narrates a serious bout of autoimmune encephalitis, which caused her to lose her memory, body mobility and identity for a month, narratives of this type are unique and inspirational. They embody a response to the question, “What can I do to change the present situation?” However, Gleeson’s Constellations does more than that; it is an example of how music and words can save one’s life and how writing the female body in pain and in culture and can help to give some sense to, and change, women’s lives in society.

Constellations is so titled perhaps to impart an “astronomical” feel or to relate it to an assemblage, collection or group of usually related persons, qualities or things. Whatever the case, Constellations is all of that, as the collection narrates Gleeson’s experiences of two deadly illnesses (monoarticular arthritis and acute promyelocytic leukaemia, APML), the first as a teenager, and the latter before her first pregnancy. The collection revolves around these two significant diagnoses and their impact on her female self and body. However, Gleeson’s reflections from life also touch upon the lives of a large number of public and historical figures, in multiple fields and countries, their deeds, emotions, illnesses, the impact of their work on culture and society. In addition, the book explores many cultural constructions relating to gender, identity and trauma issues. Gleeson’s essays cover a large historical time span, until its year of publication, 2019, a year for reflection, filtered in part through the repeal of the Eight Amendment from the Irish Constitution on 25 May the year before, when Ireland paved the way for legalized abortion.

Constellations is a powerful first-person narrative, and this device offers the reader insight into Gleeson’s reworking of her material as her life story unfolds. The collection is divided into fourteen essays, each unusually, but aptly, titled with different constellations. With aplomb Gleeson pulls off the feat of turning long-term pain, shock, fear, anxiety, frustration, despair, rage, shame, and profound gratitude for medical care and loved ones into a unique book. Yet Constellations is not just a retrospective exercise in self-reflection about two serious illnesses; it also ponders at length on Gleeson’s body and life as a woman in Ireland in her roles as a daughter, a patient, and in a variety of social and familial roles. Constellations constitutes a brave, determined and coherent attempt to dwell upon the female self/body in Ireland. Gleeson’s work also shows her mediating role as a social writer who, in holding a mirror up to politics, presents an original view of social change in the Irish context and of what the future will or could be like. Her acute consciousness of the bigger picture leads Gleeson to regret a lack of empathy and sensitivity among Irish male doctors while she was ill and in treatment. She also condemns the denial of Savita Halappanavar’s request for an abortion, then illegal under Irish law, resulting in her death from septic miscarriage. Although published nearly two decades after Linda Connolly’s 2002 book on the Irish women’s movement, Gleeson’s Constellations can be considered another “starting point of analysis” that “spawns wider questions about feminism as an agent of political and social change” in Ireland.[1]

Gleeson’s Constellations reveals her wide and multifaceted knowledge of music, culture and literature, which bring to life her two passions in evocative words and innovative aesthetic forms, making the material vital and experimental. However, Gleeson’s emotional intelligence in recalling her life experiences and her knowledge of the language of medicine in narrating the culture of the female body with so much adroitness result in a book that produces a reading experience with multiple layers, causing both pain and pleasure. Constellations facilitates learning and growth, and above all, provides intellectual satisfaction in the comprehension of a complex issue.

Constellations also has a modernist encyclopaedic nature. It is a unique non-fiction example of synaesthesia and of the multiplicity of sensibility that informed many modernist artworks. This occurs not only because when reading about pain in Constellations one experiences a concurrent subjective physical feeling other than the one being discussed, but also because one perceives the written material with more than one sense at once (“The synovial fluid in my left hip began to evaporate like rain. The bones ground together, literally turning to dust. It happened quickly, an inverse magician’s trick. Now you don’t see it, now you do”). In other words, just as sensory responses converge when reading Constellations, so are mental reflections combined with such sensorial reflections. Gleeson’s book is modernist, too, because of the enormous amount of medical, artistic, cultural, historical or critical reflections on the female body narrated within it. From Karl Landsteiner, Frida Kahlo, Roald Dahl, and Dervla Murphy to the Magdalene Laundries, Gleeson’s collection is allusive and inter-textual and hints at many other meanings, but leaves it to the reader to link the ideas and create meaning. If one adds to these characteristics the large number of themes, such as blood, contraception or dementia, forms like poems, letters or constellations, drawings of Gleeson’s modernist artistry, and her interest in a wide range of cultural practices and life experiences around the female body in pain, the scope of her collection expands exponentially. Thus, Gleeson dwells upon the fe/male artist’s idea of the body in a large number of cultural practices from many places and times, and produced by artists of different sex, race, class, ideology, religious belief and nation. Consequently, practically everything is the object of consideration in Constellations. In this context, this Irish bestseller will be an important contribution to the new perspectives on the influential narrative of the female body in pain and change, and not only in Irish culture.[2]

In sum, Gleeson’s Constellations is to be praised for her most generous, poignant and riveting literary reflections on life. Her collection is a real page-turner and deserves worldwide attention, not just because it may remind readers of similar past traumatic episodes, may awaken dormant emotions and fears, or evoke many feelings and emotions in brilliant ways. Gleeson’s book is also of merit because no matter how many times readers go through surgery like Gleeson, or how serious these readers’ illnesses may be, creative exercises of the imagination, such as this collection of essays, remind readers, in their daily routine, of how precious their health is and how trivial other matters are. Constellations will be published in the United States by Mariner HMH books on 24 March 2020, with events and press in New York that week.

[2] A very good example of this is the most recent viral piece by student of creative writing Caragh Maxwell in The Irish Times, “I hoped to God that I’d just die in the night and get it over with”. 16 February 2019. 15 December 2019. <https://www.irishtimes.com/culture/books/i-hoped-to-god-that-i-d-just-die-in-the-night-and-get-it-over-with-1.3781474>

Bauby, Jean-Dominique. The Diving-Bell and the Butterfly. London: Harper, 2008.