by José Francisco Fernández. This text may be archived and redistributed both in electronic form and in hard copy, provided that the author and journal are properly cited and no fee is charged for access. 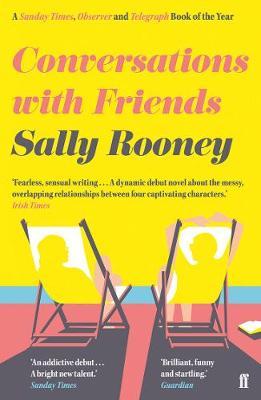 One of the most striking effects of reading Sally Rooney’s splendid first novel is that the reader does not really know what makes it so compelling, in that it is the kind of narrative that reads fluently and without obstacles. One has the feeling of gliding through an apparently comfortable terrain, only to discover later on just how bumpy the journey has been, and that the author has taken you effortlessly through a variety of different altitudes. In fact it is only on a second reading, and through a reflection on the novel’s internal structure, that one can fully appreciate just how intelligently the work has been crafted. The author possesses a high degree of narrative cunning, which is particularly directed to negotiating her own complex relationship with the protagonist of the novel, and this is perhaps what makes the narrative so intriguing.

The story is based around the coming of age of Frances, a 21-year-old Irish student at TCD. Her entrance into the adult world anticipates the usual negotiations with the complexities of grown-ups, although in her case the situation is complicated in a number of ways. Frances, who has had a sentimental relationship of sorts with her best female friend, Bobbi, is not someone who is easily impressed. Together they meet an older and wealthy couple: Melissa is a photographer, and her husband Nick, an actor. Most of the book recounts the liaisons of Frances and Nick, their ups and downs, their delusions and joys. The chronicle of the affair is sprinkled with witty dialogues, Frances normally gaining the upper hand; for example, when Nick reflects that he seems to be drawn to women writers, Frances retorts: “You just like women who can wreck you intellectually” (245). This is one of the great assets of the book, the animated exchange of opinions among the protagonists, almost all of them belonging to the same progressive, well-educated and leisured social stratum: “We often had political discussions,” reflects Frances at some point, “in which we all shared similar positions but expressed ourselves differently” (241). Frances’s sharp intelligence shines through in these conversations, although, as a counterpart to this she is not able to engage empathically with others: one of her personality traits consists of eschewing any display of emotion so that she remains constantly distant. Wickedly, the author puts her into situations in which her coolness simply cannot hold. The irony which Rooney projects pours down upon her main character, and the way that Frances deceives herself over her emotional detachment, is one of the principal achievements of the narrative. Issues related to the body and its ailments also play an important role in the protagonist’s tug-of-war with her own perceptions of reality, in that Frances suffers from endometriosis, a condition that she keeps to herself most of the time, but which makes her confront facts such as the painful physicality of existence and the body as the site of illness and discomfort.

The uninhibited description of female sexuality is another element worthy of note and in this sense Rooney joins the ranks of other female Irish writers who handle physical interaction with sexual partners in a direct way, often speaking in the first person, as is the case in this novel. Inevitably we must mention Eimear McBride here, as the main exponent of this current in contemporary Irish writing. Curiously enough, McBride’s book, The Lesser Bohemians (2016) (reviewed in issue 13 of Estudios Irlandeses) has many interesting connections with Rooney’s first incursion into long-form narrative: in both cases it is a young woman who falls in love with an older man, a handsome actor, someone who by definition is used to being in the limelight and who is often admired. In both stories he is the object of female desire, with the authors thus reversing the traditional representation of gender roles. It should also be said, though, that the protagonist’s self-exposure in McBride’s novel is more radical and visceral than in Rooney’s Conversations with Friends. In a way, Rooney’s style, discursive, detached, effortlessly elegant, is connected to a previous tradition in novel writing; it is no coincidence that Frances is reading Middlemarch for her course in English literature, and this creates suggestive intertextual connections in the narrative. McBride, meanwhile, has created her own school and her style is more experimental, even in terms of typography; the fact that Arnold Schoenberg’s Verklärte Nacht, an innovative and disturbing musical piece for string orchestra, is the artistic work which presides over The Lesser Bohemians indicates the author’s artistic referents.

Conversations with Friends is a very Irish novel, both in terms of urban geography and in the different mindset which is required in the capital, Dublin, and in a small town setting. It is a very contemporary Irish novel, though, in that gay couples no longer cause a stir, the church is hardly mentioned and classic fictional figures like the alcoholic father, as novelist Claire Kilroy has noticed, are relegated to a residual role. Reviewing the book, Kilroy wrote “Rooney sets her story in the post-crash era, among a Dublin elite. Her characters work in the arts and denounce the evils of capitalism while living off inherited wealth. The novel, indeed, is almost post-Irish” (Kilroy).

Finally, Conversations with Friends is remarkable as cultural history. It faithfully portrays the life of the millennials in the first decades of the 21st century, in a way that is reminiscent of the early Generation X narratives of the final years of the previous century – the kind of fiction that first dealt with the issue of highly qualified young people having no future prospects. Frances and Bobbi, through their contact with Melissa and Nick, enter into a world of affluence, but coming from a rich family Bobbi is more at ease in these genteel surroundings, but for Frances, who hails from the drab provincial lower-middle classes, the contrast is more pronounced, as also is her perception of wealth and privilege. A very revealing example of Rooney’s sharp dissection of modern society is the way she deals with the topic of money and the value it represents for those who do not have instant access to it. Money is something that her acquaintances do not seem to care about, whereas for Frances it is a matter of real anxiety. At one point in the novel Frances comes close to experiencing real poverty, when her unreliable father stops paying her allowance and she has to survive a month on the little cash she has herself, plus food she borrows from Bobbi. It is, admittedly, a particular kind of poverty, the kind suffered by a privileged citizen of the West, a student who has obtained financial assistance to pay her university fees and who exists within the protective embrace of the National Health Service. But this does not diminish the notion that Frances is indeed the representative of a generation that has somehow been stranded by its elders. Conversations with Friends is not the militant novel of an activist, nor does it propose a radical agenda for social change, but the description of a disoriented youth is portrayed with precision and it raises relevant questions about the future. As Torsten Bell, director of the Resolution Foundation, puts it, “When an entire cohort is not succeeding, everyone understandably feels a real need to fight tooth and nail to keep what they’ve got. The rich are much better suited to win that war. That’s a real challenge for social mobility, and a disaster for politics” (Roberts 37).