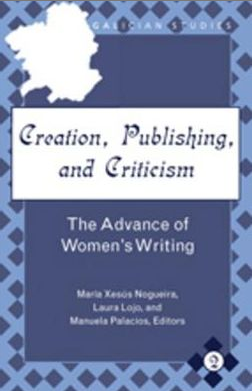 Creation, Publishing and Criticism. The Advance of Women’s Writing. 2010.

The book bears witness to a most relevant fact: the emergence and consolidation of a powerful number of women writers since the 1980s both in Galicia and Ireland, sharing geographical, historical, political, and social features and, above all, Celtic and Atlantic cultures. Its main purpose is to unveil the range of strategies by which cultural agents have conditioned this writing, bringing together the voices of writers, critics, publishers, theatre directors and journalists.  Divided in three parts  — Poetry, Fiction and Drama —, each of them covers a double dimension:  the experience of writing and publishing (as lived by both publishers and writers, or directors and playwrights in the case of drama) and the critical reception. Former obstacles are clearly referred to in the preface “A Passion for Celticism” by Luz Pozo Garza, where she states that the book surmounts old obstacles of mutual mistrust by bringing together criticism by academics and journalists as well as writers’, publishers’ and theatre directors’ self reflective collaborations.

Both Galicia and Ireland are situated on the Atlantic coast of western Europe, they are bilingual societies with a vernacular language,  both have been bastions of Roman Catholicism and both communities share a number of Celtic myths of origin and folk traditions, not to mention the emigration both suffered. Individual surveys of each geographical area are provided, emphasizing in the case of Galicia how the genre of poetry pioneered women’s production and incorporation into the genre of fiction came later, even more difficulties existing in the field of playwriting. Additional difficulties were the lack of a stable publishing network and in drama the lack of platforms for the publishing of plays. Criticism seems to have played less of a role in the case of theatre than in that of poetry and fiction by women but in any case the attention paid by literary criticism to women has contributed considerably to their visibility and their canonization. Mention is also made of new forms of literary criticism in the form of blogs, web pages and other virtual resources

All this can be applied to Ireland, though a new variable should be added in this case:  The great contradiction between its rapid economic and social transformation and the little critical attention paid to women. Irish feminism had a revitalizing effect on politics and in redefining the national identity, best expressed through the election of Mary Robinson in 1990. Nonetheless, as Mary O’Donnell remarks, for most women writing was one thing but getting into book form was quite another. In this sense the book praises highly the role of two publishing houses connected with feminist concerns, Arlen House, founded in the 1970s and Attic Press, both crucial in the 1980s, as well as Salmon publishing,  sometimes referred to as  women’s presses .

In the section devoted to Irish Poetry, both personal and professional testimony is given in Jessei Lendennie’s “Irish Women Poets in a Changing Society”. The author, a poet and the editor of Salmon Publishing talks about her 30 years of experience as a woman publisher in Ireland and recalls how  the term “kitchen-sink-poetry” used to be referred to female poetry. Despite the fact, she proclaims the great role it played in the democratization of poetry. Another poet, Susan Connolly in “Coming out of the Forest (Making the Journey from First to Second Collection)” also supplies personal experience as well as an insight into the role of festivals, awards, grants, anthologies and other means of literary — and difficult — promotion. Regarding criticism,  Irene Gilsenan Nordin’s “Poetry and Education: The Role of the Literary Critic in Academia” reminds us of the undeniable responsibility critics have in order to overcome the patriarchal system and to do justice to the new poetry and the new gaze female poetry created.

With regards to Irish Fiction, Declan Meade’s “Irish Women Writers: Forging Ahead” emphasizes the evident phallocentrism of the Irish literary canon and Paula Campbell’s “The City Girls” discusses mass market in Ireland and the importance of Poolbeg Press and the commercial fiction for women it created. As to fiction criticism and to what extent it affects female creation, Kerry Hardie’s “A writer’s Thoughts on Publication and Public Criticism” distinguishes between  academic criticism, which a writer can choose not to read, and critical reviews, which affect book launchings and sales, taking as a starting point her own experience.

The third section, Drama, provides the invaluable insight of Colette Connor in “Irish Women Playwrights: Undervalued and Overmined”, voicing her own experience as stage director and playwright within the independent theatre, and a similar case is that of  Ursula Rani Sarma’s “Transcending Categories: Thoughts on Being a Playwright and Responding to Expectation” that examines how social and gender categories have conditioned both her production and the reception of her work. The scarcity of criticism of women’s plays is dealt with by Celia De Fréine in “Women Playwrights, Whither?”, recalling her experience as an Irish language poet and playwright and arguing that criticism is a decisive tool in granting a play some visibility and durability.  There are other interesting and paradoxical aspects, for example to find out that most theatre goers are women in a male playwrights-centred world. Finally Mary O’Donnell, a poet and a fiction writer herself as well as a critic for newspapers and radio programmes, puts forward another paradox in “Irish Women’s Drama: Questions of Response and Location”: the large number of women who write drama in Ireland and the few performances they achieve. There seems to be a general consensus that playwriting is the least visible of all genres, mainly due to the lack of involvement by official institutions in supporting women playwrights’ progress. O’Donnell demands that criticism should also include not only playwrights but women directors, actresses, scriptwriters, set designers, as well as taking into account the contribution of immigrant playwrights and in a multicultural Ireland.

We thoroughly share the feeling expressed in the volume that the book will allow readers to see not only how writers, publishers and critics often join forces so as to transform the literary system, but also how they may occasionally have conflicts of interest and expectations that are difficult to accommodate.  “Her own experience” is the most frequent expression along the pages of the volume, acting as a warrant of its reliability and its “live” discussion. Challenging studies, like this one, are welcome in Irish studies since they go beyond the “literary muses” and discover for us the secrets and difficulties lying behind the writer’s creativity.