by Charles I. Armstrong. This text may be archived and redistributed both in electronic form and in hard copy, provided that the author and journal are properly cited and no fee is charged for access. 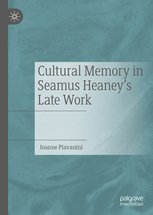 Over the last two decades, the field of literary theory has gradually changed. There have been few new theories of the classical type inaugurated by Russian Formalism, with specific definitions of literariness and interpretative methodologies of their own. While some of the directions introduced before the turn of the millennium still have a certain vitality, the more obviously different and new developments are coming from other quarters: interdisciplinary and multidisciplinary uses of literary texts in the light of broader prisms are characteristic of for instance Digital Humanities, Ecocriticism, and Disability Studies. Memory Studies is one of the key fields in this new landscape, and is one in which literary texts can be studied alongside history and collective memories, as well as in dialogue with everything ranging from popular culture to the hard sciences’ theories of how the brain works.

Joanne Piavanini’s new monograph on Seamus Heaney places itself firmly within this relatively new field. Both in the title of the book and throughout its pages she refers to “cultural” memory, thus signalling that her approach to Heaney is strongly indebted to a strand of Memory Studies coming out of influential scholars such as Aleida and Jan Assmann, as well as Astrid Erll. Drawing upon the precedents of sociologist Maurice Halbwachs and historian Pierre Nora, this approach has a particularly close link to the Social Sciences and tends to focus on a diverse range of collective narratives that straddle the traditional divide between academic, written history, and less official forms of oral memory. Although the borders are hardly impermeable, this strand of Memory Studies can be distinguished from that of Trauma Studies, where Cathy Caruth and other scholars made use of Freudian theories in a way that tapped into post-structuralist literary theory and methodology. Yet even if Piavanini largely (and somewhat surprisingly) shies away from the latter paradigm, this does not mean that she has a narrow focus, as can be gleaned from the inclusive statement of intent made at the onset of this book: “I aim to show how Heaney’s poetry creates personal, familial, regional, national and global memories that ‘travel’ across and beyond borders and time periods, oscillating between these different frames of memory” (2).

The global or transnational dimension of the later stages of Heaney’s career is particularly important to this book. Piavanini defines Heaney’s “late work” as that which comes after his winning the Nobel Prize for literature in 1995, an event that she interprets as ushering in a movement from a predominantly Ireland-centred to transnational phase in his writings. This monograph includes analyses of his last four poetry collections: The Spirit Level (1996), Electric Light (2001), District and Circle (2006), and The Human Chain (2010). In addition, Heaney’s translation work of this period – including Beowulf (1999), The Burial at Thebes: A Version of Sophocles’ Antigone (2004), and the posthumously published translation of book VI of Virgil’s Aeneid (2016) – is also addressed, and the obvious crossing of linguistic and temporal borders effectuated by Heaney’s translations is well suited to illustrate the author’s underlying premise concerning the globalism of his work. The final chapter of the book is a coda devoted to how the poet’s memory has been mediated after his death, supplementing the primarily textual focus of earlier chapters by scrutinizing new editions and institutional engagements, and with particular focus on the Seamus Heaney HomePlace that was opened in Bellaghy in 2016.

All in all, this is an interesting and well-conceived study, which provides a useful addition to Heaney studies. One might quibble with the fact that the poetry volume Seeing Things (1991) is just ruled out from Piavanini’s conception of the “late” Heaney, even if it in many respects can be read as a key ushering in of some of the tendencies focused upon in this monograph. The author’s desire to contrast the later Heaney with the earlier one would have been more convincing if there were a fuller account of the internationalism of his earlier writings, which includes persistently strong links with the U.S. after an initial stay at Berkeley in 1970-1, the exploration of “the netted routes of ancestry and trade” in the mythopoesis of North, and his turning to Eastern European exemplars in the 1970s and ’80s. Still, the decision to focus on a delimited, and in some respects not heavily researched, phase of Heaney’s career is a wise one, and important tendencies in, and comparisons between, his late writings are deftly handled here. The late Heaney often recalls the works of his earlier years, and conceiving of this as a form of memory (rather than, say, mere intertextuality) is a fruitful approach. Piavanini makes particular use of Svetlana Boym’s concept of reflective nostalgia, which is distinguished from restorative nostalgia in that it is less concerned with reconstructing a lost past than in dwelling “in the ambivalences of human longing and belonging” (164). While drawing upon Boym and other theorists of memory, Piavanini’s close dealings with Heaney’s works also engage with the established Heaney criticism of scholars such as Neil Corcoran, Michael Parker, Richard Rankin Russell, and Helen Vendler. Although closer attention might have been given to formal issues, there is much commendable work done on individual poems: the interpretation of how Heaney’s elegies for his father in his final volume, Human Chain, build on earlier poems is particularly insightful. Memory is of course at the heart of Heaney’s many elegiac poems, and a separate chapter of the book is devoted to the transnational and self-reflective dialogues opened up by his late elegies to fellow poets Joseph Brodsky, Ted Hughes, Robert Lowell, and Czeslaw Milosz.

The Nobel Prize committee famously praised Heaney’s works “of lyrical beauty and ethical depth”, and we are here presented with worthwhile reflections on the ethical dimensions of Heaney’s career in a time when he gradually turned to look at the Troubles as a receding phenomenon of the past. Recent developments in Memory Studies have led to a questioning of the simplistic binary opposition of victims and perpetrators, and Piavanini uses the reflections of Debreti Sanyal and Michael Rothberg to good effect in reflecting on how Heaney, particularly in The Spirit Level, broached feelings of complicity and implication. This is a perspective that promises to also further the future understanding of Heaney’s earlier works. With his concept of multidirectional memory, Rothberg has also been a key proponent of a view of cultural memory as a complex phenomenon, where different historical events are interpreted in light of one another. Piavanini’s chapter on The Burial Thebes is one of the strongest contributions in this book, and it homes in with good effect on how Heaney’s version of Antigone “blends the nationalist collective memory of the 1981 hunger strikes” with a reaction to 9/11 that amounts to a “transnational critique of the ‘war on terror’” (79). In this reading Heaney’s connection with the Bellaghy-born hunger striker Francis Hughes is key to the play. While here the recourse biographical knowledge provides an essential lead, elsewhere this dimension might have been put to more sophisticated use. Towards the end of her study, Piavanini refers all too briefly to Heaney’s “collaboration with Dennis O’Driscoll to produce Stepping Stones, which is something greater than a series of interviews, and more like a form of life writing” (203). This is an apposite reflection on a very interesting book, which deserves more attention as a form of authorial control emulating the highly choreographed biographies of Victorian predecessors such as Hardy and Tennyson. One can also read much of Heaney’s poetry as a form of life writing. As such, the connection between the literary text and remembered life is so pervasive and fundamental to the whole enterprise, that it deserves closer and more principled attention than it is given in this book.

Published the same year as new books on Heaney by Roy Foster and Rosie Lavan, Cultural Memory in Seamus Heaney’s Late Work comes at a time where the appraisal of the poet’s work is evidently entering into a new phase. The book’s coda, which scrutinises the memory of Heaney after his death, asks some questions that will be key for this phase: “Will his work fall out of favour within a few decades, or is his place in the canon secure? In his poetry there was a fluidity to time and space; he was able to cross borders and create folds in time. Will Heaney’s legacy be as a Northern Irish poet of the Troubles, or a cosmopolitan poet with a broad and varied oeuvre?” (201). While these are crucial questions, I am not convinced that Piavanini’s book answers them convincingly. This passage might appear to suggest – and the general focus of the book as a whole points in the same direction – that Heaney’s “place in the canon” can only be ensured by a reception that emphasises his cosmopolitanism. This ignores the fact that much literary commemoration and canonisation is facilitated by institutions that have a strong local, regional, or national investment. Furthermore, while one might allow that a too parochial or nationalist interpretation ultimately would short-change Heaney’s contribution, I find it hard to agree that this is the sole – or perhaps even the most pressing – challenge to Heaney’s reputation.

Through his thorough immersion in the precedents of W.B. Yeats and Patrick Kavanagh, Heaney’s writings show ample awareness of the fact that cosmopolitanism is a complex and, in some versions, quite problematical phenomenon for writers, and that there can – according to a logic of the symbol Heaney never really renounced – be a virtue in finding an omphalos in the places closest at hand. In political terms, one might also add that global capitalism and the Roman and British empires also are less than simply salutary phenomena, and that it can be hard to unpack insidious currents of transnationalism (hardly mentioned in this book) from more commendable ones. Along a different tack, one might also question whether Heaney’s powerful record as a “Northern Irish poet of the Troubles” represents more of a danger to his future reputation than the temptation to interpret him as an author whose primary strengths and allegiances were domestic. While Heaney is a remarkable poet of home, marriage, and family, and his consistent focus upon these themes can be read, in part at least, as salutary symptoms of a twentieth-century redefinition of masculinity, his poetry does of course have many other virtues. Inadvertently, Piavanini’s account makes clear how the final Human Chain volume, in its strong thematic emphasis on Heaney’s closest family ties, prepared the ground for a similar focus in the later rememberings of the Seamus Heaney HomePlace, the posthumously published selection of 100 Poems (2018), and the BBC documentary The Music of What Happens (2019). In a similar vein, a 2015 RTÉ poll led to “When all the others were away at mass”, a poem from his “Clearances” sequence of elegies to his mother, being voted Ireland’s favourite poem of the last century. The poem is part of a thematic nexus in his oeuvre that creates close links between poetry, kin, and geographic origins. When Piavanini worries that the “cosmopolitan Heaney who used his work to move across time and space has been anchored, albeit in the place that shaped him” (2011), this overlooks the fact that such a process to a large degree has been encouraged by Heaney himself. Ultimately, though, the most important factor determining Heaney’s future reputation will be the quality of his work, and in this respect any championing of the late Heaney demands circumspection, given that much of his most innovative and bracing work arguably was behind him by the time he was awarded the Nobel Prize. Nevertheless, readers of poetry have reason to be thankful for the entirety of Heaney’s oeuvre, and this monograph furthers our understanding of one of the most accomplished and cherished poets to come out of Ireland.