by Siobhán Kane. This text may be archived and redistributed both in electronic form and in hard copy, provided that the author and journal are properly cited and no fee is charged for access. 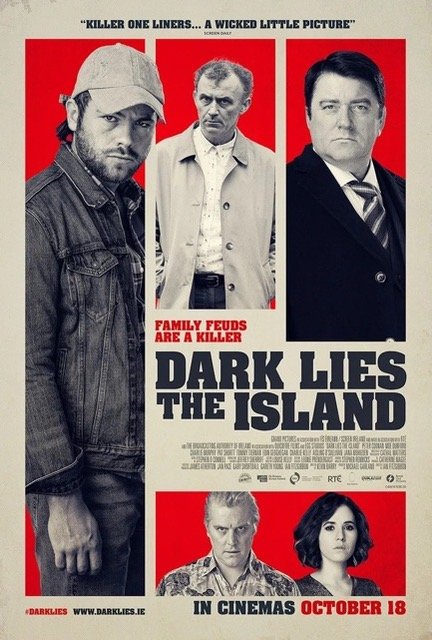 We begin with a young woman staring into a busy body of water, the local lake, staring as if searching for an answer, the kind of staring that could get you killed in this part of the country. The lake, our narrator tells us, gives off “a wicked aul’ draw”, a draw that “turned half the place crooked in the head”.

Adapted by Kevin Barry from his own stories, and directed by Ian Fitzgibbon, Dark Lies the Island brings into play the Mannion family who have run Dromord (“this godless hole of a place”) for generations. The family, presided over by the brutal, dominant “Daddy” Mannion, (expertly inhabited by Pat Shortt) and sons, own everything.

The agoraphobic son Doggy (Peter Coonan) now lives in a caravan in the woods, where he runs illegal businesses, on several different phones, mirroring and exploring a kind of moral relativism-are the legal businesses the rest of his family run (pub, undertakers, estate agents) any better because they are in the light? Don’t both “serve” the community?

The feckless second son Martin (Moe Dunford) disappoints Daddy at every turn, with hare-brained schemes and failed enterprises. All orbit the moon that is the disappointed, tormented Sarah (Charlie Murphy), previous partner of Doggy (her “true love”), lover of Martin, but married to Daddy, with a daughter (wonderful newcomer Jana Moheiden), she becomes a potent axis in a vortex of lacerated wounds, barely concealed bitterness and taut compromises.

In the midst of such tautness, Richie (a brilliantly doleful Tommy Tiernan) arrives, seeking something more, but finds himself running the local chip shop; it quickly becomes clear that Dromord is a place that can drown the dreams right out of you, give you the “green bloat”. Richie’s arrival brings with it a kind of altering alchemy, changing the paths of the dysfunctional Mannions forever.

Barry’s tales of Irish small-town rurality, banality, and immorality have always contained an epic quality, a swaggering, reckless grace that transferral to the big screen rewards. The film suggests a Sergio Leone-Coen Brothers-Harold Pinter hybrid, a different kind of western, harnessing the Irish obsession with the “outlaw” and outliers, the wonkiness to be found in community, from the innocently eccentric, to the dangerously maniacal, and the power that language can hold when weaponised, to control and diffuse any given situation.

This is where the potency lies in the film-language; all different kinds. Cathal Watters’ cinematography speaks to Barry’s carefully drawn characters – “20 years dying” in all different ways, all deft close-ups, illustrating claustrophobic lives, painted into epic landscapes, making the tragedies all the more pronounced, and Stephen Rennicks’ (Room, Frank) score walks a line of playful darkness, the elegant against the grotesque that flits around the unfolding associative dramas like a warning sign.

In Dromord everyone lives amid thwarted hopes and chaotic existences; smaller characters’ lives underscore the malaise that rips through the town like a farmhouse fire-Doggy’s acquaintances Patcho (Eoin Geoghegan) and Tee-Jay (Charlie Kelly) who are tasked with spying, are presented as slapstick stooges, and Daddy’s colleague Phyllis (the great Aisling O’Sullivan) suggests a loneliness, which is amplified when she sings Amazing Grace in the woefully out-of-place karaoke bar. But everyone and everything seems to be out-of-place, and out-of-joint, and yet so perfectly where they should be.

This theme of accepting the unacceptable until it becomes the norm weaves its way into this story of shattered lives looking for a reckoning with something, someone, anything. And the final reckoning is paced well, the tense interactions that Daddy has with his sons, that they have with each other, that Sarah has with them all, brings to mind Pinter’s play The Homecoming, and its exploration of sex and power, and language as power. It is a work of resentment, where menace replaces ethics in its underpinning.

Another influence is McGahern, whose ghostly hand hovers within the subtle savagery. Doggy’s consoling of a client of his dating service “I’ve a folder here, full of fellas who’s tongues would be hanging out of their heads for a 22 dress size” borrows from McGahern’s The Leavetaking, the lake’s image and potency from That They May Face the Rising Sun, and thematically, that sense of place that McGahern’s writes so well, and its attendant fractiousness, the dysfunction that is barely navigated, and the power of resilience to make it through, perhaps not life in totality, but another day, at least.

In Dark Lies the Island, time is presented as a discombobulating thing, we see people come to the end of their lives naturally, and unnaturally, we see the living dead, walking their way through the day, medicating any which they can. There is a suggestion that it has always been this way, in Dromord’s all around the place. We could be in 1870, 1970, or now-but small details situate us in a more modern moment, the visit of the Organic Certification Board to Martin’s chicken farm, for example, although Doggy’s retro dating service is all folders and phonecalls.

This is another part of the film’s charm; the duality, and subversion that takes place in almost every scene to deliver a real sense of this twisted community, where the extraordinary and the everyday are placed alongside each other so repetitively, that it begins to carry its own rhythm.

“What kind of child can’t get herself addicted to the fucking internet?” Sarah says, as she fails in encouraging her daughter to get distracted by the tablet. Barry interrogates what we have allowed to become the norm, across an entire spectrum, marrying our transgressive, disconnected relationship to the internet, for example, with the transgressive disconnected relationships within the Mannion family-it’s both clever and persuasive.

There is a disconcerting, yet attractive energy to Fitzgibbon’s pacing of the film. It is clear that these scenes are essentially a series of vignettes, but they are stitched together in such an interesting way that it works, perhaps because there is a philosophical realism at work-an acknowledgment that life itself is a series of vignettes. But in Dark Lies the Island, the normal “rules” of living are observed and subverted to the point where we begin to wonder if we are indeed, as Sarah muses, “only the reflection … what if the real town is down there in the black water?”

Sarah’s daughter becomes a kind of totemic presence, a voice of reason, often conveying a logical take on the depravity, which is depravity in itself, but her world-weary wisdom, and spark of potential, suggests that perhaps a second-act is coming, to borrow once more from McGahern and his 1979 novel The Pornographer “Yoo-hoo, Road! Yoo-hoo, Road!”. For some, this will mean getting out of Dromord, an act of severing, for others it will mean an act of staying, of stepping into dead men’s shoes and repeating the cycle. “Yoo-hoo, Road! Yoo-hoo, Road!”