by Liam Burke. This text may be archived and redistributed both in electronic form and in hard copy, provided that the author and journal are properly cited and no fee is charged for access. 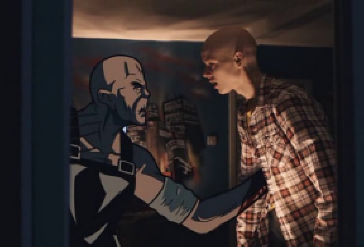 A wimp is humiliated in front of his girlfriend by a “big bully” while at the beach. Frustrated, the skinny teen decides to “gamble a stamp” on a book of “Dynamic Tension” − exercises written by Charles Atlas − “The World’s Most Perfectly Developed Man”. Later (the passage of time is unclear), the one-time wimp returns to the beach a “real man”, punching the bully and getting the girl. This simple seven-panel comic advertisement, “The Insult that Made a Man out of Mac”, first appeared in pulp magazines in 1928, and ran continuously in comic books into the 1970s. Its durability is no doubt attributable to its synergy with superhero narratives. As Brown notes, these advertisements “revolve around the male daydream that, if we could just find the right word, the right experimental drug, the right radioactive waste, then we too might instantly become paragons of masculinity” (32) with others offering similar readings of the advertisement (“Charles Atlas”; Bukatman 60; Cord 334). 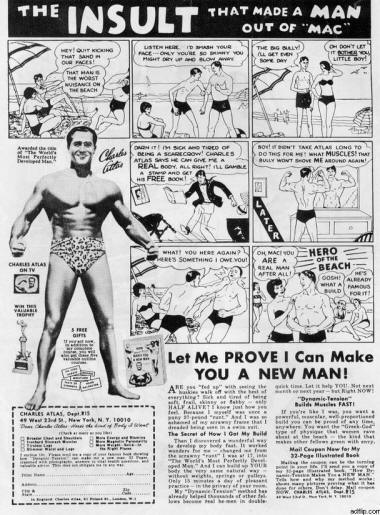 Variations on the comic advertisement for Charles Altas’ Dynamic Tension exercises, “The Insult that Made a Man out of Mac”, regularly appeared in comic books from the early days of the form right into the 1970s.

Comic books and superhero narratives have a long history as vehicles of (usually male) adolescent wish-fulfilment and escapism, which is best articulated in the transition of comic book characters from anonymous “mild-mannered” weaklings to unassailable heroes. These transformations allowed readers to identify with the protagonist’s secret identity while aspiring to their heroic persona. As with “The Insult that Made a Man out of Mac” comic creators and advertisers have played on this identification, with Stan Lee often including aspirational phrases in his comics such as, “the world’s most amazing teen-ager − Spider-Man − the superhero who could be − you” (The Amazing Spider-Man #9: February, 1964). As Umberto Eco noted in his oft-cited essay, The Myth of Superman, in the manner in which“ Clark Kent appears fearful, timid, awkward, near-sighted and submissive, [he] personifies fairly typically the average reader who is harassed by complexes and despised by his fellow man” (14-5).

Released the same summer that Peter Parker went back to high school (The Amazing Spider-Man) and The Avengers battled The Dark Knight Rises for box office supremacy, the Irish drama Death of a Superhero (Ian Fitzgibbon 2012) offered a more grounded reworking of these classic comic book archetypes. This Dublin-set film follows 15-year-old Donald Clarke (Thomas Brodie-Sangster), who faces the typical dilemmas of a teenager: school, sex, friends and family, but his difficulties are compounded as Donald has recently developed cancer. Donald’s mother scours the Internet for miracle cures; his father talks of overseas holidays that are never likely to happen; while his friends and older brother attempt to carry on as though nothing has changed. A talented artist, Donald, permanently sporting a beanie hat that hides his hair loss, prefers to retreat into a fantasy world of costumed-clad adventures, dastardly doctors and buxom babes, realised through animated interludes and superimpositions that recall 1940s Superman serials.1 Occasionally, Donald gives flight to these characters, rendering them in graffiti across Dublin’s south-side.

When Donald is brought home by the Guards after playing chicken with a DART train, his mother (Sharon Horgan) sends him to “shrink No. 6”, Dr Adrian King (Andy Serkis), a psychiatrist who specialises in thanatology (the study of death). Donald quickly applies grandiose comic book terms to his new psychiatrist labelling him “Dr. Death”, but despite some initial friction, the unorthodox Dr. King wins the angry young man over and they begin to address some of Donald’s fears and resentments. Unexpectedly, Donald strikes up a relationship with the new girl at school, the defiant and free-spirited Shelly (Aisling Loftus), and his cancer goes into remission. At this point the comic book fantasies become less prevalent. However, a cooling of Donald’s new relationship and a terminal prognosis send him crashing back into his fantasy realm. However, these fictions offer little respite and Donald, aided by his friends, brother and (somewhat implausibly) Dr. King, hire a prostitute so that Donald can lose his virginity ahead of his inevitable demise.

Death of a Superhero is an adaptation of the novel of the same name by New Zealand author and screenwriter Anthony McCarten. The novel’s cover blurb promises a “brilliantly original fusion of novel, comic book and film script” suggesting a blending of image and text similar to The Invention of Hugo Cabret, the Diary of a Wimpy Kid series or at the very least the visual writing techniques ofExtremely Loud and Incredibly Close. However, apart from some emoticons “!*^X?*^@!” (120), and occasional onomatopoeia “BURRRRRRRRR!!!” (54), there is little attempt to engage with the comic form. Instead, the novel seems to be tailored to the most imagination-deprived Hollywood producer, as much of the text is written in screenplay format, “Int. Church. Day” (15), replete with camera directions, “Cut to… A hospital wing” (12). That the author shifted the setting from Wellington (NZ) to Watford (UK) in the second, revised edition is further evidence of the desire to make it amenable to the screen. Nonetheless the imprint of its sunnier origin is evident, with mentions of a “hot dry season” (23) and “barbecue decks” (52) sitting awkwardly in the south of England.

Despite the author’s ambitions the novel did not make it to the screen in a single bound. At one stage McCarten was to direct and write the adaptation in his native New Zealand as a co-production with the German company Bavaria Pictures. Eventually the involvement of Dublin-based Grand Pictures and the Irish Film Board found the story migrate from Wellington to Dublin (via Watford) with Irish director Ian Fitzgibbon (A Film With Me In It) taking the reigns. Similarly, McCarten is credited with the adaptation, but director Ian Fitzgibbon and Mark Doherty share a “Director’s Draft”.

Although the international development of the film, and its eventual cast, result in a general lack of cultural specificity (Fitzgibbon’s strong use of Sandycove and environs on Dublin’s south-side coast notwithstanding) the transition from page to screen is more seamless than the journey from New Zealand to Dublin. The novel cries out for the immediacy of the visual form to give flight to Donald’s fantasies and render in nuance what can only be clumsily conveyed on the page. Wordless sequences, such as Donald perilously walking along a footbridge handrail over a busy motorway immediately convey the character’s mindset. These sequences are given a heroic lift, as, much like Mac in the Charles Atlas advertisement, Donald re-imagines these moments in superheroic terms. Donald’s heroic alter-ego (Miracleman in the book, unnamed in the film) shares his hair loss and introspection, but has a heroic build, invulnerable veneer and “the women go crazy for him”. These animated sequences are rendered in the bold lines and sharp colours of graffiti art, and not only provide an insight into Donald’s world, but deliver some stylistic flourishes in what might otherwise have been a very suburban-set affair.

Like other recent films and television programmes such as 50/50, The Big C or even Breaking Bad,Death of a Superhero is about living with cancer rather than presenting the disease as a second act reveal or the sum total of a character’s personality. In the lead role of Donald, Thomas Brodie-Sangster conveys the conflicting emotions of a teen equally troubled by his virginity as he is by his condition. Brodie-Sangster has retained the youthful features that made him so recognisable as Liam Neeson’s son in Love Actually. This intertextual link heightens his transition from the precocious sprite of the Richard Curtis rom-com to the gaunt and pale Donald of Death of a Superhero. Andy Serkis’s Dr. Adrian King seems to have graduated from the Robin Williams’ school of psychiatry: hirsute, clad in ill-fitting jumpers and with an office that looks like a book store’s bargain bin, he spars with Donald, but ultimately they help each other. Serkis, freed from the pixels that have obscured his most high profile roles, invests this well-worn cliché with genuine pathos and displays a restraint unseen in his more famous creations. Although the story is slight, the committed performances and genuine visual flair of Death of a Superhero elevate its source material by realising the story in the medium the novel was clearly striving to replicate. The beats are expected but controlled, and there is an overall honesty to the film that earns its third act payoff.

Although the film shares some thematic resonances with 50/50, unlike that comedy the odds to not fall in Donald Clarke’s favour. Reaching the fifth stage of grief, acceptance, Donald baulks from a third act liaison with a prostitute, opting to spend his final moments with Shelly. Donald’s epiphany is appropriately conveyed in animated form, with his monosyllabic alter-ego finally defeating his nemesis, The Glove, with a blinding beam of white light. As fantasy bleeds into reality the now deceased Donald is shown in a hospital bed, bathed in a heavenly glow, surrounded by his family.

In an earlier scene in the oncology ward Donald asks a young cancer sufferer what she is going to be when she grows up. She responds “dancer” to which Donald, only somewhat sarcastically, offers, “I’m going to be a superhero”, “No you’re not” the girl counters. Although Donald would not enjoy the heroic metamorphosis of Peter Parker, Clark Kent or even Charles Atlas’ Mac, Death of a Superhero suggests that the superhero’s ability to lift one out of reality, if only for a short time, is a special power worth celebrating.