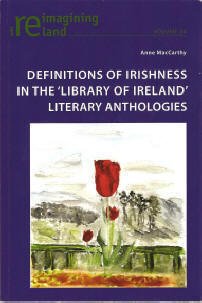 Definitions of Irishness in the ‘Library of Ireland’ Literary Anthologies is the posthumous work of the most outstanding specialist in nineteenth-century Irish literature in Spain, and a further scholarly testimony of the great loss that Anne MacCarthy’s death meant for Irish Studies.

The book studies a series of anthologies that were included in the “Library of Ireland”, a project envisaged by the Young Islanders Thomas Davis (1814-1845) and Gavan Duffy (1816-1903) with the intention of forging a new identity for the Irish and aiding in the achieving of political independence (2).

The anthologies studied, most of them published between 1845 and 1847, included four poetic anthologies: Charles Gavan Duffy’s The Ballad Poetry of Ireland, Michael J. Barry’s Songs of Ireland, Thornton MacMahon’s The Casket of Irish Pearls, Denis Florence MacCarthy’s The Book of Irish Ballads, and Hercules Ellis’s Songs of Ireland, Second Series; biographical Sketches of Irish writers: Thomas D’Arcy M’Gee’s Gallery of Irish Writers: The Seventeenth Century and Denis Florence MacCarthy’s The Poets and Dramatists of Ireland; two collections of Thomas Davis’s work: Literary and Historical Essays and The Poems of Thomas Davis; as well as three novels by William Carleton: Rody the Rover, Parra Sastha and Art Maguire. Therefore, out of the twenty-two books published initially in the ‘Library’, half of it was made up of literary texts.

Anne MacCarthy focuses her book on the study of the anthologies, and the first chapter of the volume is particularly enlightening for understanding the political and cultural role of the literary anthologies that are separately studied in the subsequent chapters. Notwithstanding, the author offers in this initial chapter sound reflections on crucial aspects related to the selection, compilation, and objectives of literary anthologies. Thus, in a chapter informed by the work of specialists on literary anthologies such as André Lefevere, Laura Mandell, Anne Ferry, Julia Wright and Barbara Benedict, MacCarthy revises the definitimargin-bottom: 3pt;onsliterary anthologies provided by specialists; studies the importance of titles that catch the readers’ attention, give an idea of community and project a unified and uniform vision of Ireland and of the Irish; analyses the role of the anthologist and the contribution of these type of volumes to literary history; without forgetting to point out the economic advantages, aesthetic appeal and more immediate message of the shorter pieces usually included in anthologies.

All these considerations are taken into account in relation to the project envisaged in the ‘Library of Ireland’ Literary anthologies, and the author of the book judiciously acknowledges that political and nationalist interests were prioritized over literary and aesthetic parameters. Nevertheless, as MacCarthy maintains, this did not contain the effects that the texts included in the ‘Library of Ireland’ would have in the future establishment of a canon of Irish literature and culture.

Chapter Two introduces the figures of James Duffy, publisher of the ‘Library of Ireland’, and of Margaret Callan, editor under the pseudonym of Thornton MacMahon, of The Casket of Irish Pearls. MacCarthy describes in detail how James Duffy, who began as a small Dublin bookseller trading in Catholic book, entered into contact with the Young Irelanders with a view to publishing the ‘Library of Ireland’. MacCarthy explains that James Duffy managed to survive as editor and publisher of mainly religious publications, despite the difficult circumstances of the publishing industry in Ireland after the Act of Union of 1801 and the establishment of the Copyright Act in an Ireland economically and spiritually devastated by the Famine.

The main figure studied in the chapter is that of Margaret Callan, the editor of The Casket of Irish Pearls. MacCarthy details the importance of the introduction to the anthology, highlighting its overtly didactic intention. Throughout the chapter, MacCarthy dwells on the highly ambivalent situation of women in nineteenth-century Irish nationalist enterprises. The chapter accounts for Callan’s choice of publishing under a pseudonym, and explains why editor is addressing a male audience exclusively. MacCarthy revises the importance of the title, the portability of the volume, the inscription on the title page, the process of selection, and the emotional language employed by Callan. She pays especial attention to the relationship between women and the nationalist cause and dwells on the ambivalences detected in Margaret Callan’s views on religion, gender and nationalism. Particular attention is given to the inclusion of pieces by three women, Mrs Tighe’s “The Lily”, Lady Morgan’s “Catholic Gentlemen in the Penal Times” and Maria Edgeworth’s “Mental and Personal Charms”. Very Judiciously, MacCarthy acknowledges that national groups in Ireland were profoundly conservative on issues relating to gender equality but that Callan was “trying, at least, to allocate a limited space to women writers in her anthology” (94).

Chapter Three studies two anthologies, Michael Barry’s The Songs of Ireland and its continuation, Hercules Ellis’s The Songs of Ireland. The analysis of the anthologies is preceded by a reflection on Davis’s ideas on music and its importance in Irish cultural nationalism, as reflected in “Essay on Irish Songs”, an article that was published anonymously in the Nation in 1844 and that was also included in Barry’s anthology.

The chapter offers very interesting insights on Davis’s conception of the Irish character, on his process of selection of authors and pieces included, as well as on the evolution of aesthetic and political concerns that separates Ellis’s from Barry’s anthology.

MacCarthy does not hesitate to point out the shortcomings of Barry’s and Ellis’s cultural enterprises. Thus, she acknowledges the absence of musical scores accompanying the songs included in both anthologies, probably due to the urgency with which the anthologies were published. Similarly, she does not fail to notice the absence of compositions in Irish or even of translations, being most of the poems “Anglo-Irish ballads” and what is more, recent pieces, what make them “more easily accessible to the Irish reader in English, but excludes readers who spoke and read only Irish” (121). These and other aspects that are dealt with throughout the chapter, such as the scarce representation of Thomas Moore, considered “too refined and too tame” by Davis (111), find an explanation in the authentic purpose of a volume, that should “tell the story of Ireland, so that who read or sing these songs will become acquainted with their past and thus with themselves” (111). Therefore, the reductionist and isolationist view of Ireland and of the Irish can be easily detected both in Davis’s introduction as well as in the selection of authors and songs included that not only marginalize aesthetic considerations but also, as MacCarthy carefully details, excludes or misrepresents the work of many Irish writers.

The second collection mentioned, Hercules Ellis’s The Songs of Ireland is less carefully studied and considered mainly as a continuation of Barry’s prior enterprise. Nevertheless, despite the scarce space allotted in the chapter, MacCarthy offers interesting insights that prove how by 1848, when Ellis’s anthology was published, literature was progressively being judged with aesthetic rather than with political parameters.

Chapter Four considers two anthologies of ballads included in the ‘Library of Ireland’ series: Charles Gaven Duffy’s The Ballad Poetry of Ireland (1845) and Denis Florence MacCarthy’s The Book of Irish Ballads (1846). As in previous and subsequent chapters, Anne MacCarthy offers information about the editors and gives details about their publications. Similarly, she pays especial attention to the editors’ respective definition of Irishness, to their intention to contribute with the selection to create an Irish Identity, and to how this aim was also considered in the arrangement of the pieces selected.

Duffy’s intention was clearly to create a new literature which would forward the independence of Ireland. He chose ballads that were emotionally effective and with a nationalist purpose and his anthology became so popular that it went through more than forty-three editions in the nineteenth century.

Duffy referred to the authors included as essentially Irish in character and spirit meanwhile MacCarthy took into account writers born in Ireland. The ballads included are recent and written in English since the editors’ main purpose was to appeal and influence their readers. Therefore, the ballads “should be national and appeal more to the emotions than the intellect” (171).

In this chapter, we learn as much about the anthologies as about the authors and works included, since Anne MacCarthy displays here her own expertise in the work of authors such as James Clarence Mangan, Edward Walsh, John Banim, Denis Florence MacCarthy, or Thomas D’Arcy M’Gee, among others. Therefore, she carefully analyses the significance of the pieces chosen by the anthologists, the implications of the arrangement of the contributions included, and the contribution of these anthologies to the creation of an Irish identity.

The last chapter of the volume deals with two anthologies published in 1846, Denis Florence MacCarthy’s The Poets and Dramatists of Ireland, and Thomas D’Arcy M’Gee’s Gallery of Irish Writers: The Seventeenth Century. The two literary histories are dealt separately and after an analysis of the work done by the editors and the principles followed in the selection of writers included in each anthology. MacCarthy lists the writers chosen and a brief commentary on the editors’ assessment of each of them.

Particularly interesting is, as in previous chapters, the study that Anne MacCarthy offers of the prefaces or introductions in which the authors expose their procedure. Thus, she carefully revises Denis Florence MacCarthy’s long introduction in which he surprisingly reflects on pagan and early Christian civilisation as a “justification for the value of Irish culture” (202). We also learn throughout the chapter that The Poets and Dramatists of Ireland is a truly nationalist literary history in which works are included if they are ideologically suitable rather than aesthetically valuable. Once again, we do not find Irish-language compositions or translations into English and, surprisingly, Florence MacCarthy included authors not commonly associated with Ireland such as George Farquar, Richard Steele or William Congreve, detecting omissions such as Edmund Burke or Oliver Goldsmith. The editor’s purpose was clearly to choose the most overtly Irish works of the author even when they were not their best literary productions. It is also surprising in this anthology the number of Protestant writers included (15 out of 18 writers).

M’Gee, on the contrary, includes only three Protestant authors among the twenty one he has chosen for an anthology more concerned with history than with literature. Anne MacCarthy deals carefully with the Preface to the anthology as well as with the essay that closes it, entitled “A Few Words by Way of ‘Finis’”. In both pieces M’Gee explains the reasons for choosing to focus on the seventeenth century, that for the editor was a particularly important and influential time for nineteenth-century Ireland. M’Gee’s selection includes writers who wrote in Irish, English and Latin, on condition that they have provided in their works information on the history of Ireland and, therefore, contributed to the creation of an Irish identity.

The purpose of the book, stated in the “Preface” − “I hope this study will be a stimulus to literary and historical scholars to give more attention to this series of books which, until now, have been paid scant attention” (xiii) −, has been successfully accomplished by the author since Anne MacCarthy has managed to demonstrate 1) the political and nationalist input of the anthologies studied; 2) the influence exerted by those texts in the revision and rewriting of Irish history; 3) the literary value of the volumes studied who lay the foundations for a native literature and established a literary heritage.