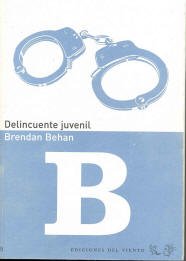 Brendan Behan’s most famous novel, Borstal Boy, has at last been translated into Spanish, fifty years after it was first published. It was high time somebody carried out the project of making a Spanish version of this fascinating autobiographical book, and the merit should go to Ediciones del Viento, a Galician press that is adamant in recovering forgotten classics in the English language, including Los días de Birmania, by George Orwell, or Viaje a una guerra, by C. Isherwood and W.H. Auden.

Behan was arrested in Liverpool in 1939 for carrying explosives into England. He was a member of the IRA and that would only be the first of a series of different offences for  which he was to be sent to prison.Borstal Boy is an account of his temporary stay in prison waiting for trial and his subsequent sentence to three years’ borstal detention. He could not be sent to jail for a longer sentence as he was not yet 17.

What stands out in the narration of his period of detention is, undoubtedly, the protagonist’s narrative voice, the fluent current of memories from a young conscience. Behan tells everything from the point of view of a 16-year-old who is receptive to the warmth of friendship, idealistic, naive, resentful of the screws or jailers who treat him badly (curiously enough, those of his own persuasion: “Los celadores católicos eran los peores. Y los católicos irlandeses, los peores de los peores”, 81), almost grateful to those who are kind. His happiness when he is given a particularly good meal, or when he is allowed to read a good book, or simply when he is warm in his cell makes the reader tune in with a flow of empathy towards the protagonist.

He is shown to be a truly convinced and fanatical member of the IRA, who has learnt by heart from an early age, and without questioning, the creed of Irish Nationalism, which enables him to deliver a political speech to the judge who sends him to borstal. But at the same time he can’t help being friends with all kinds of people, regardless of their nationality: “It seemed a bit disloyal to me that I should prefer to be with boys from English cities than with my own countrymen and comrades from Ireland’s hills and glens”/“Me parecía un poco desleal querer estar con chicos de ciudades inglesas antes que con mis propios paisanos y camaradas de las montañas y los valles de Irlanda” (193).

He learns to be tough in prison, to fend for himself and to get in trouble only when it is absolutely necessary. He tells with candour that he reads books avidly and finds comfort in the rituals of the Catholic Mass.

Reading Borstal Boy in Spanish makes one reflect on the impossibility of translation in general. There is nothing particularly wrong with this much needed version. In Sonia Fernández Ordás’s text the reading is fluent and easy (with occasional mistakes: it hurts  the eye to read a reference to “W.B. Yates” on page 42). I do not know if there is any other option for the title than Delincuente juvenil, although this one leaves to one side the idea of confinement and reclusion associated with borstal or “correccional de menores”. Something similar happens with the slang, swear words and the peculiar accents of the prisoners that appear in the novel. It is simply not possible to convey the expressive force and wit of many expressions. The phrase “I’m after using it” must be “acabo de usarlo”, but it misses all the colour of Hiberno-English. “Fugh off” is not simply “jódete”, there is a lilt and a grimace that goes with that expletive, but there is no possible way of putting it in a different form.

Fernández Ordás gives an updated and modern version of the dialogues in colloquial Spanish, most of the time presenting a more literal interpretation when in the original the narrator employs a euphemism or an idiom. The interested readers can check for themselves how the expressions “pull your wire” (p. 133 in the translation) or “not worth a light” (p. 211) are turned into Spanish to see this particular point. In any case, the optimism of Behan’s personality shines through in the Spanish translation as it probably would in any language. The small linguistic adjustments do not distract readers from the many rewards of reading this book.