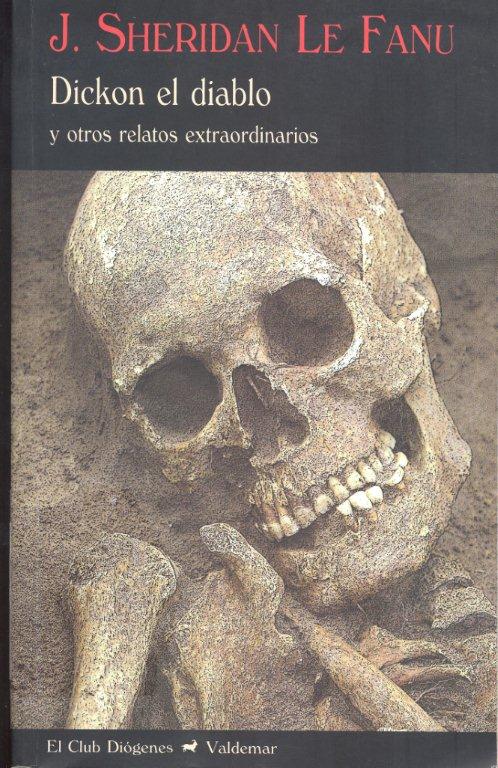 In a Glass Darkly (1872) is the most famous collection of stories by J. S. Le Fanu, including horror classics like “Green Tea” or “Carmilla”, the first female woman vampire in literary history. Le Fanu’s favourite theme of having a character falling into the abyss of self-destruction is expressed here at its best. However, he had written many ghost stories before, and in Dickon el diabloSpanish readers can enjoy a selection of pieces from the beginning of his career, when Le Fanu was perfecting his art. Some of the eight stories in this collection were published in the late 1830s in the Dublin University Magazine, a journal which he edited and eventually owned. Others appeared in Ghost Stories and Tales of Mystery (1851). The present volume has been translated by Rafael Lassaletta.

Horror stories in general have developed so much since The Castle of Otranto (1764) by Horace Walpole, that to read narratives like the story which gives its name to the whole collection, “Dickon el Diablo” (simple, effective, neat) makes contemporary horror fiction overelaborated by comparison. The sense of being in the presence of a kind of  “natural” storytelling is reinforced by Le Fanu’s personal style: half-hearted, slightly ironic, as if sometimes he did not completely believe what is taking place or, at least, as if he did not demand absolute earnestness on the part of the reader. It is common for Le Fanu to begin his stories nonchalantly, recalling the interlocutor who once told him the tale, usually an old woman shortly before dying. In many ways Le Fanu conforms to the type of Victorian writer, who did not put much value on the short story as a genre (“burlettas”, as W. M. Thackeray called his short pieces). It was the novel, of course, which took all the attention and devotion. That is why the genre of short story grew in such an attractive manner, being free from constraints and imposing demands.

The almost anecdotal character of the form can be seen in “Historias de fantasmas de Chapelizod” (“Ghost Stories of Chapelizod”), the first section in Dickon el diablo, really consisting of a series of sketches told by the narrator to “a kind reader” in a casual way. In the present circumstances it is an appropriate piece to warm up before some serious hair-raising. “La visión de Tom Chuff” (“The Vision of Tom Chuff”) is a fine example of a Le Fanu ghost story, with the main character unbearably laden with the responsibility of being honest and kind to his family while his nature forces him downwards to the depths of evil. No redemption is possible for those already doomed to fail.

Apart from the attraction of a fateful destiny, what really enhances tension in the stories is the description of a threatening atmosphere, so sinister that in some of the stories it is the element that holds the structure of the narrative. The classic elements of horror can be found here in a pristine form: a solitary moon shining through the winter trees of the graveyard, a decrepit house, strange creatures relentlessly pursuing terrified sinners.

Le Fanu is interesting by himself and also for what came after him. In the story “La prima asesinada” (“The Murdered Cousin”), the third in the collection, Le Fanu seemed to be working on the theme that he would fully develop in his celebrated novel Uncle Silas (1864): the story of an innocently young heiress who is sent to live with her devious uncle after her father’s death. Her uncle’s plans to murder her will have unexpected consequences. What the critic James Kilroy wrote about the novel can be safely applied to stories like this one: “The narrators are so well developed, and their confusion and sense of vulnerability so evocative, that the novels sustain a mood of terror.”

Another story included in Dickon el Diablo, “Un capítulo en la historia de una familia de Tyrone” (“A Chapter in the History of a Tyrone Family”) is important because it is frequently cited as a possible influence on Charlotte Brontë’s Jane Eyre, with the griping account of a violent attack by an insane woman. “Elhuésped misterioso” (“The mysterious Lodger”) is probably the most disturbing story in the whole volume, producing an effect that goes beyond the strange pleasures of horror fiction; it deals with the impossibility of escaping once misfortune, in the form of an utterly fiendish lodger, has chosen its victim. It raises complicated questions about chance and disgrace. You do not want to read it.