by Paul O'Hanrahan. This text may be archived and redistributed both in electronic form and in hard copy, provided that the author and journal are properly cited and no fee is charged for access. 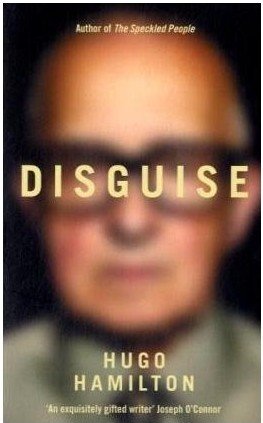 In the two decades since his first Berlin novel, Surrogate City (1990), Irish-German author Hugo Hamilton has been much concerned with surrogacy and the need to compensate for life’s failings by creating alternatives. Published in 2008, Hamilton’s most recent novel, Disguise, also set in Berlin, is a meditation on personal and post-war German history, which begins with an act of surrogacy. In the chaos and panic of a wartime air-raid on Berlin, a mother loses her child; later, in Nuremberg, her father finds a three year-old in the midst of refugees drifting from the east and offers it to his daughter as a replacement. There follows a shift in the action to 2008 and a scene of apple-picking in an orchard in Jüterbog, Brandenburg, on the southern perimeter of Berlin.  The forwarding of the action by six decades allows for a retrospective view of how the foundling child, now identified as Gregor, has fared in his life. In his early development, suppression within the family of questions about his adoption becomes a source of contention. Following a conversation with an uncle, Gregor’s discovery that he might be of Jewish origin leads him finally to leave the family home after an unresolved argument with his parents. Gregor’s frustrations with a repressive family environment are epitomised by a scene in which he lets off a hunting rifle in the family kitchen, causing minor damage, but illustrating the anarchic violence bred by the suffocating domestic atmosphere. In Disguise, Gregor’s struggle with an authoritarian father is emblematic of the family conflict which characterised the 1968 generation in Germany; it is also a theme which courses through Hamilton’s work, reflecting the author’s own difficulties in his upbringing in Ireland when he was  forced to conform to the strict nationalist regime of his Irish father.

Gregor’s name echoes that of the protagonist of Kafka’s Metamorphosis. Like his namesake in the Kafka story, Hamilton’s Gregor inspires familial consternation and paternal antagonism through an identity which he has inherited and over which he has little control. In both cases, a family constructed on conformist expectations is unable to accommodate individual singularity. Disguise describes Gregor’s unsettled peripatetic life as he seeks to find an environment in which he feels at home.  A musician, he becomes accustomed to a travelling lifestyle and, although he has a wife and son, spends long periods away from his own family. The likelihood of another generation being disfigured by the disruption caused by a problematic father is only countered by the successful nurturing of Gregor’s son, Daniel. The latter is coaxed through some dysfunctional episodes by his wife, Mara, with the support of Martin, a sympathetic friend of the couple who becomes a surrogate father to Daniel.

The dual Irish-German cultural context of Hamilton’s work is apparent when Gregor teams up with an Irish musician. Later he travels to Ireland and looks up his erstwhile musical partner but the indifferent reception he receives is far from the hospitality stereotypically associated with the “Green Island” beloved of many Germans in the decades after the war.  Gregor stays in Ireland and finds work but he is largely anonymous within Irish society and makes no friends, apart from the conversational bond he develops with a Jewish dentist from Poland. The period is significantly defined by Gregor’s absence from traumatic moments in his son’s development such as his admission to hospital after an overdose.  On receiving the news of the fall of the Berlin Wall, Gregor returns to Nuremburg to visit his mother, who is dying. Here an allegorical reading of the narrative is clearly signalled when Gregor’s reunion with his mother, at which he is also joined by his own family, coincides with the dawning of German reunification. Reviewing the story, Gregor’s wanderings and separation from his own family can be read as a representation of the rootlessness of divided Germany in the post-war period.

Resourceful women, notably including his own mother as featured in his memoir The Speckled People (2003), are a recurrent element in Hamilton’s work. Research carried out by Mara, Gregor’s wife, into her husband’s possible Jewish origins reveals her to have a determined, investigative nature comparable to Christa Süsskind in Hamilton’s novelThe Love Test (1995), who pursues enquiries into abuses perpetrated on her and her dissident husband by the Stasi, the notorious East German secret police. Mara’s research is inconclusive but is another important act of surrogacy in sustaining the relationship between Gregor’s family and his mother in the absence of Gregor himself.

The relaxed and supportive environment of a contemporary orchard around Gregor’s narrative has the effect of encompassing the alienation and trauma of Gregor’s turbulent past and the wartime stories associated with his relatives. By joining family and friends in a pastoral setting, ultimately Gregor is shown as willing to accept that he is at home and that the people who surround him embody what he has become. Hamilton in this novel is particularly forthright on identity as a construct rather than a birthright and, by presenting his friends as an alternative family who come to constitute Gregor’s identity, the narrative asserts how the embedding of personal history in supportive relationships can be as formative as environment and family of origin. As Gregor’s friend, Martin, observes: “His identity is the people he’s been living with’(259).

Although Jewishness itself is not probed in depth in the novel, Disguisedisplays the uneasiness of post-war German attitudes to Jewishness, an issue which has come to the fore with unification and the need for Germany as a whole to recognise the country’s Nazi past. One of the novel’s strengths is the trenchancy of its narrative voice, one example of which is the confidence of its pronouncements on contemporary Berlin, in which the city is credited for its ability to absorb and learn from its tragic experience:

The city is vivid with history. Layers of it in every suburb, coming up through the streets, in people’s eyes. A chamber of horrors, but also a place of monuments and devotion to memory.  A place that has no time for greatness any more and celebrates instead the ordinary genius of survival. A wounded place at the heart of Europe, eager to heal and laugh (96).

Praised by critics such as Hermione Lee for the strength and originality of its wartime scenes (The Guardian, 28 June 2008), Hamilton’s portrayal inDisguise of the German civilian experience of war aligns him with writers such as W.G. Sebald and Günter Grass, both of whom have in recent years expressed the need to redress the neglect in recording the suffering of the Germans in the Second World War. As described in The Speckled People, Hamilton’s sensitivity to German suffering had its reflection in his own youth, when, as a child of mixed Irish and German parentage, he was regularly taunted as a Nazi by some of his peers. The accusation was particularly hurtful as his German mother was herself a refugee from the Nazi regime.

Disguise is a novel which reflects on action and behaviour rather than presenting it directly. This may distance some readers who enjoyed the immediacy of The Speckled People, but the strong narrative presence enables the text to function as a novel of ideas, at once showing andtelling how identity is constructed and can be created. Beginning with wartime destruction and ending in the contemporary discovery of a pastoral place, this is a novel informed by an optimistic vision of our times.

In the second volume of his memoirs, The Sailor in the Wardrobe (2006), Hamilton describes how Berlin became a haven for him when he discovered the city as a young man. Similarly, in Disguise, Berlin in the sixties is seen as a site of renewal, the place “for everyone to begin afresh” (43). Further recognition of the city’s emancipatory influence is embodied in the use of a rural Brandenburg setting which reconnects Berlin with the hinterland from which it was severed by the Cold War division of the city. Reflecting the trajectory of post-war German history and of the generation which has endured and shaped it, Disguise shows how friends become more than surrogate in nurturing new forms of family and identity:

Gregor Liedmann has been brought to life by Mara, by his family, by the external story created around him, existing only inside those experiences he has shared with others (254).

Once again assuming the mask of fiction, Hamilton reveals how close the novelist’s trade is to the everyday business of constructing our own characters and narratives, and, by advocacy of an ethic of mutual support, would seem to imply that in understanding how our relationships make us what we are, the better we together have the potential to become.