by Sabina Müller. This text may be archived and redistributed both in electronic form and in hard copy, provided that the author and journal are properly cited and no fee is charged for access. 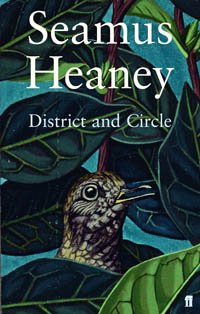 District and Circle by Seamus Heaney.

Heaney’s original district is the rural County Derry of his childhood. At its centre lies the Mossbawn pump, the omphalos, as described in Preoccupations (1980). In District and Circle the poet still draws on childhood memories but he also intertwines these with concerns of a post-9/11 society. In that sense his ‘district’ has become increasingly global in reach.

The opening poem of this volume, «The Turnip-Snedder,» returns to farmwork, «an age of bare hands / and cast iron,» the «double-flywheeled water-pump» and more than familiar Heaney-speak: «it dug its heels in among wooden tubs / and troughs of slops. But when «the handle turned / and turnip-heads were let fall and fed // to the juiced-up inner blades,» agrimmer note is struck, and, with the  «raw sliced mess» that is dropped «bucketful by glistering bucketful», the atmosphere for the entire volume is set.

«Anahorish 1944» harks back to «Anahorish» in Wintering Out. In that first poem there is an almost magical understanding of names: Anahorish (anach fhior uisce) is the ‘place of clear water’; the nature of the place — Eden-like— revealed in the name. In the new poem the water is soiled and we realize how much the younger poet selected to convey a certain impression – an impression an older Heaney can bear to qualify, for now the place is violated from within and without: «We were killing pigs when the Americans arrived,» and there is «gutter-blood / Outside the slaughterhouse» as two lines of soldiers advance, «guns on their shoulders,» «[h]osting for Normandy.»

With Sweeney Astray, Beowulf and other texts Heaney has also made a name for himself as a translator. In District and Circle he includes pieces from different places and times. «Poet to Blacksmith» is a translation of an Irish poem in which Eoghan Rua Ó Súilleabháin asks Séamus MacGearailt to make him a spade «to take on the earth, / A suitable tool for digging» and «best thing of all, the ring of it, sweet as a bell.» Here Heaney comes full circle, taking up again his early signature poem «Digging.»

«After the Fire,» a translation of Rilke’s «Die Brandstätte,» makes clear what impact any kind of disaster, ancient or modern, has on human beings. It tells of the gruesome work of the «son of the place» who drags «an out-of-shape old can or kettle / From under hot, half burnt-away house-beams.» It also tells of the gulf such an experience opens between those who have suffered loss and those who have not. Thus the son has not only lost home and family but has to understand that he is now a «foreigner» among his neighbours. «After the Fire» offers a view at close range where the individual’s fate is rendered palpable. «Anything Can Happen,» by contrast, is more distanced. It is an adaptation of Horace (Odes, 1, 34). Here the allusion is to 9/11: «Anything can happen, the tallest towers // Be overturned, those in high places daunted, / Those overlooked regarded.» But while we certainly agree with the general message, we would probably not want to link the event to Jupiter’s wrath.

With the title poem we enter the London Underground and share a passenger’s uneasy feelings after the bombings of July 2005. The poem ends with the train finally departing and gathering speed. In the closing adjective Heaney shows his mastery, for here he catches the essential in a single compound:

And so by night and day to be transported

Through galleried earth with them, the only relict

Of all that I belonged to, hurtled forward,

Reflecting in a window mirror-backed

The poem is also a descent to the underworld featuring many of the typical elements known from classical and medieval literature. They have formed part of Heaney’s repertoire since «Station Island,» «The Golden Bough» or «The Crossing» and seem, like the sonnet form (used more than ten times in this volume) perhaps somewhat exhausted.

With the death of Heaney’s parents the thought of personal loss has assumed greater importance in his work, and especially in The Haw Lantern and Seeing Things Heaney worked on the theme. With advancing age the circle widens to include the death of fellow poets as well as thoughts of one’s own mortality. Not all texts succeed. «Stern,» written in memory of Ted Hughes, is not convincing. Yet «Out of this World» is a fine piece commemorating Czeslaw Milosz. Heaney’s own favourite and probably many readers’ is «The Blackbird of Glanmore.» Here the poet is greeted by a blackbird sitting on the grass when he arrives at Glanmore. Pausing, lines he «once translated / Come back: ‘I want away / To the house of death, to my father / Under the low clay roof.'» This thought leads on to his brother Christoper, who died as a child in a road accident. Heaney again doubles back and now provides an impressive companion to the early «Mid-Term Break,» where he saw his brother in a «four foot box as in his cot» — «a foot for every year.» But only later a neighbour pointed out that he noticed a blackbird in the time before the death — a folk omen. In «The Blackbird of Glanmore», Heaney takes stock when he sees himself as a «shadow on raked gravel // In front of my house of life.» There is a valedictory note since the poem closes with the blackbird on «the grass when I arrive, // In the ivy when I leave.»

District and Circle is a carefully designed volume. The existence of disruptive forces is not denied but, as always with Heaney, things fall into place – sometimes too neatly. There are no loose ends, everything is connected. The title itself is well-chosen and packed with meaning. It can, for instance, be linked to the end of «Station Island,» where Joyce advised the poet: «When they make the circle wide, it’s time to swim // out on your own.» Heaney has swum out, yet one wishes that he could not only have liberated himself from others but also from familiar forms and themes on which he relies perhaps too much in District and Circle. Nevertheless, the present volume is a much more satisfactory achievement than Electric Light, and looks with admirable courage and serenity at the tasks that are now at hand.