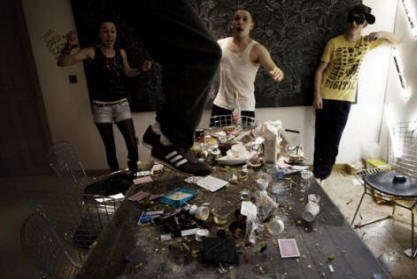 The tag line “Six lunatics, one night, one secret, no control” seems a curious choice for Kirsten Sheridan’s Dollhouse (2012), implying as it does all manner of tightly-plotted narrative intrigue.  Instead, we are given an overgrown short film, an experimental narrative that continually seeks to exceed the limits of its own boundaries, but unfortunately rarely succeeds.  Late at night, a group of delinquent teenagers break into a luxury seafront house, and embark on a spree of drinking and pill-popping that seems continually poised to erupt into violence.  Sheridan seems to be aiming for a tone somewhere between Skins (Channel 4, 2007-2013) and Funny Games (Michael Haneke, 1997), and clearly revels in the energy generated by her young cast’s efforts.

This project, the latest from the director of Disco Pigs (2001) and August Rush (2007), originates from Dublin’s The Factory, a formerly-derelict Dublin building located in the environs of Google’s Dublin HQ on Barrow Street. Converted by Sheridan along with filmmakers Lance Daly, John Carney and others, the Factory now houses filmmakers, casting agents, music producers and actors.  And a co-operative mindset certainly spreads through Dollhouse: improvised by a group of young actors  —   from whom the greater details of a very thin treatment were deliberately withheld by Sheridan  —   the approach has some charm, but ultimately fails to convince.  Dollhouse’s main achievement is that it manages to cultivate and maintain an air of unease  —   often close to genuine menace  —   throughout, even as the narrative of the film collapses into a series of increasingly disjointed sequences, culminating in a bizarre nativity tableau. However, it lacks any semblance of coherence, and the workshopped nature of the piece creates as many problems as it solves; for every fresh and unexpected moment the improvisation throws up, it also seems to raise a narrative blind alley.

Colin Downey and Ross McDonnell’s limpid, glowing photography is one of the best things about the film, and indeed illustrates one of the most interesting trends to emerge from Irish cinema in the past few years, the rise of a new generation of talented cinematographers which also includes the award-winning Kate McCullough (His & Hers (2009), Snap (2010)) and Suzie Lavelle (One Hundred Mornings (2009), Pyjama Girls (2010), The Other Side of Sleep (2011)). Their work lends a lush sheen to Sheridan’s shots, limited primarily  —   one still morning sea-view sequence aside  —   as they are to the interiors of her luxurious south Dublin set.  Indeed, the choice of location itself, the modernist Dalkey mansion of Sheridan’s parents,1 seems somehow symbolic of the problems at the heart of Dollhouse.

In a recessionary period when acquiring funding for even the most promising film projects is tougher than ever, Sheridan’s track record guarantees her serious consideration in any round of funding decisions by the likes of the Irish Film Board (who did indeed part-fund this project),2 and it would be malicious, inaccurate bedrudgery to attribute her success to nepotism.  And yet, without wishing to feed into an naively auteurist discourse on the matter, there is something a little discomfiting about the apparent ease with which a ramshackle experimental piece such as this can be produced, distributed and widely reviewed once access to mechanisms of the culture industry is close at hand.  Certainly, the ‘let’s put the show on right here’ ethos of the film’s production is entirely in keeping with the workshopped, improvisational aesthetic of the work coming from The Factory.  More than that, by virtue of the film’s geographically-restricted nature, the location dictates much of the film’s form and tone.

The story of Jim Sheridan’s house − with its jacuzzi, sauna, cinema for twenty, private jetty, and so on − constructed in the fading light of property boom in south Dublin’s exclusive Dalkey, and his well-publicised court battle regarding alleged defective work, became something of a staple for Irish newspaper columnists.  Here, its gorgeously minimalist rooms are at first objects of wonder, but quickly become the target of an inchoate, aimless teenage rage: defiled by a food fight; defaced by witless marker scribbles; its contents burned outside in the night.  One stand-out sequence, airy and dreamlike, gives us a rare moment of collaboration between the young invaders, as they band together to literally up-end the house’s equilibrium, gluing and nailing bedroom furniture and accessories to the ceiling to form a delightfully bizarre mirror image. The house itself constitutes not a ‘simple’ setting, if such a thing could ever be said to exist, but a narrative signifier all of its own  —   of comfort and domesticity, but also of power and privilege.

Therefore, the use of the Sheridan family home as signifier must be looked at in the context of the film’s attitude to privilege itself, as played out in its most problematic aspect: the absolute absence of any consciousness of how class is represented.  Sheridan herself  tacitly notes the centrality of the class dynamic to the film’s entire premise when she says:

I knew they were going to be gone for months so I just said to John Carney; “weshould make a film, we have a free house” and he said “No, it’s your house, you should make the film.” Then I got an idea of the clash of two worlds; I couldn’t really write about the people who live in Dalkey because it’s not really my world, so I thought I would bring the kids I do know out there.3

However, this consciousness is not reflected in the film itself, which lacks any real feeling for ‘the kids I do know’, or any sense that they have a story to tell.

Indeed, it is curiously free of any real acknowledgement of the manner in which power and authority are distributed, either outside the house, or inside its whitewashed walls.  Instead, we are given a miniaturised class war, in which the pristine sanctity of the ultra-modernist Sheridan mansion is apparently threatened by rapacious ‘howyas’ armed with threateningly working-class accents, awash with booze and fistfuls of drugs.  It seems unfair to blame the youth and inexperience of the improvising actors for the unsatisfactory manner in which this plays out, but the lack of attention to the ideological or personal politics of the ‘invasion’ leaves a thematic and ethical void at film’s heart.  How are we meant to interpret its politics, other than as a not-so-covert warning that the underclass is only ever moments away from an orgy of vengeance and destruction?

As the film progresses, the evidently upper-middle-class characters are made increasingly central, and the  —   frankly more interesting  —   others are correspondingly marginalised; this is presented as the ‘natural’ order of things, narratively speaking, in a way that rankles.  Sheridan’s attention moves gradually away from confident but physically vulnerable Denise (Kate Stanley Brennan), eternally watchful Shane (Shane Curry, of Lance Daly’s Kisses (2008)) and volatile Eanna (Johnny Ward), who teeters on the verge of tattooed, hyper-masculine cliché but pulls back when necessary.  Instead, we are invited to focus on the pointedly SoCoDu Jeannie, whose portrayal by Seána Kerslake is oddly disjointed, distanced from psychological and emotional realism in a way that does not suggest theoretical reflexivity or formal experimentation so much as it does a director’s abandonment of an inexperienced actor to her own devices.  The progressive  —   but unconvincing  —   unravelling of her mental state, as well as her back story, is punctuated by the unexpected introduction of Jeannie’s old friend Robbie (the charismatic, eminently watchable Jack Reynor, who filmed this before starring in Lenny Abrahamson’s acclaimed What Richard Did (2012)). This adds a temporary adrenalin jolt to the already tense atmosphere, challenging as it does the group dynamic, but fails to add anything substantial to the storyline.

The film winds to a messy conclusion, culminating in a bizarre nativity tableau-cum-prodigal daughter resolution.  In a smarter film, this might have had parodic qualities but here, Jeannie is just another pretty blank-faced cipher to add to the pantheon of Irish cinematic womanhood: virgin, whore, madonna, but never satisfyingly human.  The other characters sneak away into the morning, apparently transfigured  —   but by their enactment of some kind of post-punk aesthetics of wanton destruction, or simply by their brush with the middle classes, we cannot tell. Where a film like Funny Games asks unsettling questions about entitlement, instinct, and privilege, despite the best intentions of its young cast and Sheridan’s keen eye, Dollhouse gives us instead minor damage as spectacle, vague atmospherics without real intent.