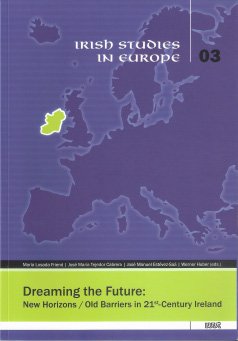 The latest volume of the series Irish Studies in Europe, with the title Dreaming the Future: New Horizons/Old Barriers in 21st-Century Ireland, contains a wide range of critical studies on Irish studies that do not only deal with literature but also with other aspects of culture and history in Ireland and Europe. The majority of studies included came out of the Sixth International EFACIS Conference held in December 2007 in Seville. The thematic editorial line of the volume distinctly reflects the interaction between the old and the new in Irish studies. Accordingly, the choice of topics do address this interest in showing how old themes, traditions and images are not only (re)visited and (re)approached but, more importantly, (re)dreamt anew in 21st-century Ireland. The studies challenge the barriers and boundaries anchored in many different approaches to the writers, topics and issues addressed here. The volume successfully presents new critical views on Irish topics which range in time from the nineteenth century up to the twenty-first century. The present volume has, as was expected, a representative tribute to Irish-Spanish perspectives. The volume’s scholarly depth and the editorial mastery in the choice and distribution of the studies make this latest volume of Irish Studies in Europe a clear exemplar of the “European” dimension of perspectives and approaches to Ireland and Irish interests.

Declan Kiberd’s “Old Testaments and New: Joyce and Messianic Time” represents a comprehensive analysis of Joyce’s mastery in endorsing Ulysses with a backbone of ancient religious and secular texts. For Kiberd, Ulysses stands as a modern text that needs the (re)visioning, (re)cycling, (re)writing and (re)interpretation of such texts as the Old Testament and the New Testament. Joyce’s use of these texts enabled him to design the fulfillment of earlier tradition in the prophetic Ulysses. The use of messianic time in Ulysses points to the belief that the constraints of time make us and any work of art be past, present and future at the same time because our being in the present pointing to a near future enables us to design future realities of the past, but, we, and our artistic productions, will also stand as past realities for future generations.

Benigno del Río Molina’s “Geography of Desire and Guilt: Joyce’s “Circe” in the Tradition of The Temptation of Saint Anthony” maps the crossing influences of Flaubert’s The Temptation of Saint Anthony, heavily influenced by Breughel the Younger’s The Temptation. For Del Río Molina, the echoes between the representations of Bloom’s and Saint Anthony’s temptations and tribulations are beautifully delineated by Joyce, who minutely introduces into a contemporary Dublin a landscape of sexuality, desire, enticement and attraction which goes side by side with an atmosphere of trauma, sin, hallucination, tediousness and emptiness. For Del Río Molina, in “Circe” a modern pattern of temptation can be traced back to former levels of artistic representation infused anew by Joyce.

In “Reading Oscar Wilde in Post-war Spain: The Picture of Dorian Gray under the Microscope”, Alberto Lázaro approaches reception and censorship in Wilde’s novel both at the end of 19th-century Britain and especially in Spain at the time of the Spanish civil war and after. In Britain, the novel first met with controversial and praising reviews. When Wilde’s novel reached Spain in 1918 it became a popular read. However, as Lázaro rightly states, controversy arose during Franco’s regime, once the censorship system was enforced. After a thorough examination of the censorship files in the Archivo General de la Administración, Lázaro correctly assesses that the “fluctuations” in the censors’ decisions cannot be solely ascribed to their lack of zeal; but rather to Wilde’s novel being constantly open to interpretations.

Juan Ignacio Oliva’s “Rewriting Ireland through Fractured Male Selves in the Works of Jamie O’Neill” scrutinizes how O’Neill’s fiction serves as a means of subverting narratives about the social discourse in Ireland with regard to masculinity. Dysfunctional families, father-figure characters, disordered youths, contested sexualities are rightly assessed by Oliva in O’Neill’s fiction, which can be read under a myriad of prisms due to its multiple male voices. The historical background in O’Neill’s fiction also helps in the analysis of the time-span in which masculinity in Ireland is seen as traditionally struggling around environments that abound with hostility, rigidity, fracture and disturbance towards the “male selves”. O’Neill’s writing offers a profound quest for the envisaging of new identities, revisions and interpretations of masculinity.

José Francisco Fernández delves into Spanish echoes and motifs in Samuel Beckett. In “Spanish Beckett” Fernández minutely analyses connections, allusions and (re)workings of Spanish literary origin in Beckett’s early works and his less known translations of Mexican poems compiled by Octavio Paz and commissioned by UNESCO in the 1950s. Either known to him through his readings, his self-study of Spanish or his affair with a student of Spanish during his Trinity College years, Beckett was well acquainted with Spanish literature. Fernández also addresses a less well-known aspect of Beckett’s relationship with Spanish and its literature in his translations of Mexican poems. As Fernández shows, Beckett accepted this task with extreme professionalism although he did not seem to have liked the quality of the Mexican poems in its original.

In “Irish Cinema and Europe throughout the Twentieth Century: an Overview” Estelle Epinoux addresses the history of cinema in Ireland and its interaction with Europe from the very end of the nineteenth century up to the beginning of the twenty-first century. Abounding on issues of exclusion and isolationism, with a distinct political nationalist stance, the first five decades of Irish cinema were characterized by a defense of what was truly Irish. The 1960s saw attempts to challenge images of Ireland that somehow did not match with the social, political and economic development of the rest of Europe. The last forty years are characterized by the Irish entry in the ECC and also by a higher exposure to Hollywood and the process of globalization, all of which have added to the appearance of new realities in Irish cinema.

Marie-Claire Considère-Charon examines the significance of cross-border cooperation in her “New Horizons for the Border Areas: from Good Intentions to Good Practice in Cross-border Cooperation”. Her analysis maps the history behind such a process in Ireland, which needs to be seen from the very start of partition in 1921, the whole process after the first provisional IRA ceasefire in 1994 and the historical landmark of the Good Friday Agreement in 1998. Although Considère-Charon is well aware of the short time-span of analysis and the need of time to see the results of cross-border policy implementation at large, dramatic and crucial steps have been taken on both sides of the border which can serve, as Considère-Charon contends, as models for similar conflicts in the rest of Europe and the world.

Rita Ann Higgins adds the final touches of poetry to this volume. Her poems, “Ask the concierge”, “He knows no artichokes” and “The Immortals” encompass what is new and modern about poetry in Ireland. Higgins’s clear-cut vocabulary and composition in these poems address the complexities of today’s Ireland. Higgins’s poetic enterprise makes the reader aware of a combination of approaches to old barriers and new horizons in a future that is being dreamt in 21st-century Ireland.

All in all, Dreaming the Future: New Horizons/Old Barriers in 21st-Century Ireland, represents, thus, an illuminating, comprehensive and challenging publication on Irish studies.