Dublin Noir: the Celtic Tiger vs. the Ugly American

Dublin Noir: the Celtic Tiger vs. the Ugly American

by Dermot Kelly. This text may be archived and redistributed both in electronic form and in hard copy, provided that the author and journal are properly cited and no fee is charged for access. 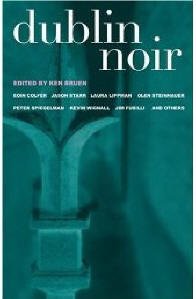 Dublin Noir: the Celtic Tiger vs. the Ugly American ed. by Ken Bruen

In Dublin Noir Ken Bruen has assembled a formidable posse of crime writers. Eoin Colfer leads off with “Taking on PJ” and, even though he’s from Wexford and only lived in the capital city for three years, he sounds like Roddy Doyle’s anarchic younger cousin from the tower blocks. Listen to his two young hoodlums bracing themselves for their encounter with the enforcer sent by a gangster called Warren:

Little Mike was sucked in by his friend’s enthusiasm. “And just how am I supposed to distract him?”

“You know how,” said Christy meaningfully, nodding in a respectful and non-homosexual way at Little Mike’s bollock area (p. 19).

The hilarious yarn ends with Christy telling Little Mike they’ll spend the loot “like Bono and the Edge” down in Waterford (p. 30).

Next up is the editor of the volume himself with “Black Stuff”, a story of art theft featuring a black Dubliner named for Phil Lynott who drinks in the snug in Mulligan’s. The real subject of the book, the love affair between Ireland and America, comes to the fore in this hardboiled piece. The narrative voice is as clipped and slangy as Elmore Leonard’s, but Ken Bruen can’t hide his mastery of the native lexicon: “But you use fierce in both senses, like terrific, and like woesome  —  gotta be Irish to instinctively get that. You can learn the sense of it, but never the full usage” (p. 42).

Pat Mullan’s “Tribunal” could hardly be more timely, all about the price of affluence: “If you’re telling me the truth, then you were the bagman for these bastards for years. Selling your own people down the drain” (p. 51). The corrupt political territory will be familiar to fans of Jimmy Breslin and George V. Higgins.

Bruen has divided his book into four parts with himself, Colfer and Mullan making up “Part I: The Inside Job”. Reed Farrell Coleman kicks off “Part II: The Manhattan Connection” with “Portrait of the Killer as a Young Man”, an all too believable tale of revenge involving a Dublin taxi driver and his American fares. The lurid authenticity is maintained in Peter Spiegelman’s “The Best Part”, which includes Ken Bruen’s favourite line of dialogue  —  “Yer pretty feckin’ Irish for a New York Jew, Jimmy  —  you’ll fit right in in Dublin”  —  delivered by a truly chilling femme fatale called Kathryn Margot Flynn (p. 72).

“The Ghost of Rory Gallagher” by Jim Fusilli will remind readers that squalor can still be found in Celtic Tigerland as a disgraced financial trader emerges from an English jail to buy himself a pub in the Hibernian metropolis:

A dump over on the north side of the Liffey, off the Royal Canal, a regular shitehole it was, a right kip. Entrance in a stone alley beyond mounds of rubbish, and you couldn’t stumble upon it without a map. Celtic Tiger my arse, it seemed to say. Two steps down and the rainwater flooded the drain, and that was all right too. Mold and rotten wood, the floorboards sagging (p. 78).

Fusilli is a wonderful writer who manages to jam in references to Yeats (born in Sligo, the disgraced trader briefly considers calling his pub the Rag and Bone, thinking of the bard of his home county) and Beckett (he describes the denizens of his joint as “a motley bunch straight out of Beckett, and moths flew up from under their tattered greatcoats.”) without sounding pretentious (p. 80). As well as the uncanny presence heralded by the story’s title, Fusilli’s contribution offers the book’s most resonant justification for vengeance, as far as this reviewer is concerned: “We’re from Limerick , and we don’t forget” (p. 90).

Following the Donegal blues played by “The Ghost of Rory Gallagher” Jason Starr’s “Lost in Dublin” comes off as a slight showing by a writer of real ability. Its treatment of twenty-first-century Dublin crime has the ring of truth but nevertheless fails to sustain the fever pitch of the pieces before and after it. Maybe Starr saves his best material for his novels. The last of the Manhattan dispatches, Charlie Stella’s “Tainted Goods”, opens with a foulmouthed, politically incorrect monologue from one Jack Dugan that recalls George V. Higgins from around the time of The Friends of Eddie Coyle (1972): “A broad tells you you’re a comfortable fit, what it means, make no mistake about it, boyos, it means you have a small dick, she’s trying not to hurt your feelings” (p. 104).

“Part III: Heart of the Old Country” contains a quartet of writers from elsewhere in Europe (Scotland, Hungary and England, to be precise). Ray Banks takes his title, “Wrong ‘Em, Boyo”, from a vintage track by the Clash and spits out Caledonian wisecracks at the velocity of early Irvine Welsh. The coarseness is an appropriate vehicle for exploring the great sibling rivalry of those islands, the one between the Scots and the Irish, as an Edinburgh thug crosses the sea to settle a score in Dublin. Banks even uses the Ulster Scots verb ‘greet’, recorded by P. W. Joyce in English As We Speak It In Ireland (1910): “Cunts didn’t cry at the funeral, but stick on Patsy Cline and they greeted like bairns” (p. 126).

From Budapest, Olen Steinhauer opens “The Piss-Stained Czech” with what sounds like the book’s most sincere homage to Joyce: “The door Toman knocked on was opened by a skinny Irishman with a beard that made me think of drunks lingering in the corners of pubs in Ulysses  —  everything I knew about Dublin came from that book” (p. 129). Of course this foreign Joycean ends up talking to a Garda who, upon learning that the narrator, who coincidentally has the same name as the author, wants to be a writer, quips, “Don’t get much better than McBain” (p. 133).

“Wish” by John Rickards captures the menace of Dublin at its noir best: “It’s a shithole of a flat, though, overlooking the railway tracks not far from where they cross the Tolka, north of Dublin’s city center. Building that smells of boiled vegetables and cat piss” (p. 137). Rickards conjures the spectre of neo-Nazis terrorizing the city’s waifs and strays and, amazingly, he pulls it off with creepy aplomb.

Kevin Wignall’s “The Death of Jeffers” throws us into a bewildering world of what just might be Anglo-Irish intrigue as an Englishman of Irish descent pays an unexpected visit to a lecturer at Trinity College. A recognizable setting that includes Wynn’s Hotel is evoked in convincing detail, but, even after four readings, the significance of the ending still eludes this reviewer. Maybe another four readings will unravel the beguiling puzzle.

“Part Four: New World Noir” starts with a very entertaining story called “The Honor Bar” by the Baltimore writer Laura Lippman, author of the P. I. Tess Monaghan series. Among other jokes, Lippman deploys the most suggestive Joycean allusion in Dublin Noir. It happens when an American with the unlikely name of Bliss Dewitt queries her Irish partner who has the altogether more likely name of Rory Malone about a name (not hers) he breathed into the nape of her neck during coitus:

“Whose name are you saying?”

“Why, Millie. Like in the novel, Ulysses. I was pretending you were Millie and I was Bloom.”

In “Tourist Trade” James O. Born’s career in law enforcement helps him create a taut conversation between a perpetrator and a cop, but for this reviewer the story’s final twist was excessive, although that is undoubtedly the whole point. Sarah Weinman’s “Hen Night” makes a poignant stopover at the Irish-Jewish Museum off the South Circular Road before embarking on a suitably rancid night in Temple Bar. Zelmont Raines, the tough-talking hero of Gary Phillips’s “The Man for the Job”, an American football player dropped from the NFL and searching for a crack fix after an exhibition game at Lansdowne Road, recounts a story that more than lives up to its sordid premise. Patrick J. Lambe has done an impressive job imagining the racial repertoire of what he calls “The New Prosperity.” With “Lonely and Gone” Duane Swierczynski achieves an unnerving effect by transcribing just one voice in a scary barroom dialogue that leads to a surprising reversal. Finally, the title of Craig McDonald’s “Rope-A-Dope” refers to the one-two punch of Ecstasy and Rohypnol one George Lipsanos is planning to administer to a woman he meets in a Harcourt Street downstairs bar  —  that is, until he gets the shock of his life. So Ken Bruen should be applauded for getting all these talents together to share their gripping and amusing tales of setups, pickups, stickups and shagups.