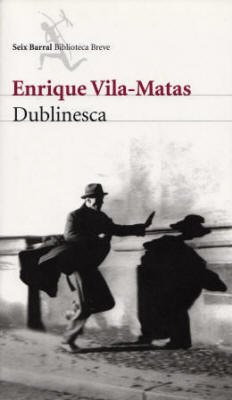 Dublinesca, by Enrique Vila-Matas, is not by any means a novel about emigrants, although the protagonist falls under the spell of all things Irish (or more precisely English in the widest sense of the word, in what effectively constitutes the adoption of a new culture) and decides to go to Dublin and there enact a funeral for the age of print, the Gutenberg era, which he understands is in its death throes. Samuel Riba is a prestigious and recently retired editor, perhaps the last of the cultivated representatives of his trade, who wants to mourn the disappearance of the literary novel, eclipsed as it is by the emergence of Neo-Gothic artifacts and best-sellers. Choosing James Joyce’s Ulysses (1922) as the pinnacle of glory of a fading epoch, Riba consequently decides to carry out the funeral rites in the capital of Ireland on 16 June, Bloomsday.

There are personal reasons for running away from Spain. Since he stopped drinking two years before, when he had been taken to hospital suffering from a physical breakdown that almost killed him, he has become a grumpy old man and everything makes him angry. He is almost sixty, has no children, and lives in Barcelona with Celia, his wife, who has threatened to leave him if he returns to the bottle. He spends his days locked in this flat, surfing the internet for hours like a Japanese hikikomori, and blaming himself for not having been able during his thirty years as editor to find and publish the unknown young author who would have become the literary genius of the new era. He feels empty and gradually out of touch with reality. At the full height of his profession his inner void was filled by compiling his catalogue, the list of authors he gathered and which made of him a legend in the publishing industry. That was an essential element of his personality then, apart from having an active social life. At the time when the novel begins, in May 2008 (the two other chapters correspond to the following two months, June and July, of the same year), he occasionally goes out of his flat to visit his elderly parents, who live in the same house where he grew up, and this contributes enormously to his feeling trapped and stuck in time.

But there are also cultural motives that provoke in him the need for a change. As Vila-Matas has acknowledged (in Cruz 2010) there are many autobiographical aspects in his portrait of Samuel Riba, although conveniently disguised. The author himself belongs to the literary generation who came of age and published their first books in the nineteen sixties and seventies, when Barcelona was the Mecca of modernity in a backward and tradition-bound Spain. Because of its closeness to the rest of the continent it had retained the atmosphere of a cosmopolitan city and was an exception in the cultural wasteland of Francoist Spain.

The most daring publishing houses (Lumen, Seix Barral, Tusquets…) were in Barcelona and the most innovative and transgressive intellectuals had begun their career in that city (the Goytisolo brothers, Jaime Gil de Biedma, Juan Marsé, Ana María Moix, Félix de Azúa, Manuel Vázquez Montalbán…). For this generation French culture was the model to follow and French literature their artistic referent. Enrique Vila-Matas is firmly grounded in that tradition, his name permanently associated to the group of Francophile artists from Barcelona (Baños 2010: 57). If in the realm of fiction Vila-Matas makes his main character undergo a personal crisis, the author himself suffered a serious kidney failure in 2006, when he had to undergo life-saving surgery. After this experience he reconsidered his past career and a new horizon was deemed necessary. In the novel this means going English or “dar el salto inglés” as he defines it. His friends tell him that the new approach will be good for him, will make him more flexible, lighter, a more humorous kind of person. If he abandoned Spain for France to escape from “el eterno verano inculto del Franquismo” (117), where it was a commonplace to be proud of not having read Ulysses for its being boring and incomprehensible (116), now perhaps is time for a change of route, and literature written in English seems the most attractive option.

The question now is, why choosing Ireland as the new destination?

Here the connection with the first set of motives (what impels him to abandon French culture) is more uncertain. In the novel, Irishness is diluted in the English-speaking world. New York, and not Dublin, is where the protagonist finds the essence of happiness. What attracts him to this corner of Europe is its quality of being strange to him: “lo inglés [es] el inicio de la diferencia, el comienzo de lo exótico” (77). For his new start in life, Riba has decided to become less latino, and in a country outside the Spanish and French orbit he might recover the strangeness of things (78). Dublin, a city where he has never been, seems to him the ideal place to be a foreigner (79).

Although the attraction of Dublin lacks a firm grounding in reality, it is his admiration for Irish literature which makes up for the fragile acquaintance with Ireland. Dublinesca is a very literary novel and the books by other writers occupy a prominent place. “Literatosis”, or obsession for books, a term coined by Juan Carlos Onetti but adopted by Vila-Matas, has always been a common feature in his fiction, although it is also true that a more solid plot is built here than in much of his previous work: “Vila-Matas ha conseguido algo poco corriente: siendo más Vila-Matas que nunca es de repente un Vila-Matas para todos los públicos” (Martínez-Lage 2010: 80). The first text that appears when rubbing off the first layer of Vila-Matas’s narrative is of courseUlysses, and it is notable that the author captures what Declan Kiberd has described as a defining feature of Joyce’s novel: men who seem dead and masculinity in crisis (Kiberd 2009: 100). In his funeral for the age of printing Samuel Riba openly repeats Paddy Dignam’s exequies that take place in Chapter 6 of Joyce’s book. The second day of his stay in Dublin, 16 June 2008, he and his three friends (like Leopold Bloom sharing a funereal carriage with Simon Dedalus, Martin Cunningham and Jack Power) indeed visit Glasnevin Catholic Cemetery where Paddy Dignam was buried. The funeral for the Gutenberg era, which takes place near the end of the second chapter at the cemetery chapel, is confused, fragmented and playfully incoherent, as befits a modern-day rewriting of an iconic masterpiece. Samuel Riba, very much Vila-Matas’s updated version of Leopold Bloom, being half-Jewish and a foreigner among his own people, reads the poem by Philip Larkin “Dublinesque”, from which the novel we are reading takes its very name. Outside the cemetery Riba’s attention is drawn to a man in a mackintosh not related to the group who shortly afterwards disappears in the mist. This is another intertextual game with Ulysses, where a mysterious man in the same garment appears briefly several times. Vila-Matas treats Dublinesca itself as if it were an image doubly reflected in a hall of mirrors: in the previous chapter Riba has glimpsed in Barcelona his own version of the mackintosh man in the shape of a young individual with a Nehru jacket. In any case, the man in the cemetery serves to introduce the presiding figure in the third and final chapter, who is none other than Samuel Beckett.

In his wandering through Dublin, and even before, when Riba is preparing his journey, comments on Brendan Behan, W.B. Yeats and Flann O’Brien, among others, have contributed to the creation of a highly allusive Irish literary context. Now is the time for Beckett. In fact, it could be said that Riba went to Dublin to meet Joyce and found Beckett. It makes sense, after all, to end with Beckett having previously dealt with Joyce; if the latter represents the power of the word, after its demise the only logical conclusion is the search for silence represented by the former.

By exploring obsessively the nature of loneliness, of defeat and hopelessness Vila-Matas pays in Dublinesca a dignified homage to his most admired author. The happy finding of fragments of Molloy and Murphy, thinly disguised in the third chapter of the book, enhance the solipsistic quality of Vila-Matas’s narrative. What happens to Samuel Riba in the last and nightmarish chapter of the book must be discovered by the readers: whether he is able or not to survive the burial of literature and the whirlpool of his life in Dublin. Readers of Vila-Matas will in any case imagine that, whatever the outcome, there will be different strata of literary substance to be deciphered and assessed.

Dublinesca is perhaps the beginning of a new direction in the career of a respected and accomplished author. It is certainly a stimulating and intriguing piece of fiction.