by Gisele Giandoni Wolkoff. This text may be archived and redistributed both in electronic form and in hard copy, provided that the author and journal are properly cited and no fee is charged for access. 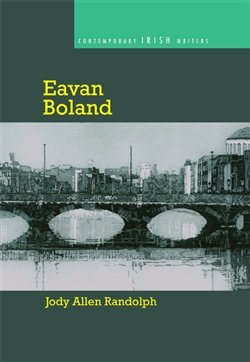 For readers and scholars dedicated to contemporary Irish women writers, Eavan Boland has been a foundational name, particularly for the generations of poets who followed hers. Both her essays and poetry have contributed largely to the revision of the degree of influence of the canonical names in Irish poetry in contemporary times.  They have also contributed to the debate regarding perceptions of Ireland and the places and spaces occupied by women on patriarchal ground. This has long been accepted as a worldwide consensus amongst scholars who have studied Boland’s works. Yet, in spite of the several critical readings that started flourishing in the 1990s about her works, ranging from In Her Own Image and Night Feed to Object Lessons and others, there has never in my opinion been such a thorough, critical volume focused on the connections between the life of the poet and her works as this 2014 publication, Eavan Boland.

Dr. Jody Allen Randolph’s critical publications cover topics that range from Caribbean authors such as Edward Kamau Brathwaite and postcolonialism in the early 1990s, to Irish literature and feminisms. The variety of topics, however, can be seen in conjunction with thoroughness of information and detailed criticism. For example, Eavan Boland: A Sourcebook already gathered thorough information about the diversity of Boland’s writings in a highly organized manner. Yet, in spite of this impressively organized informational criticism, there has always been the lack of a single, biographically-oriented criticism on the writings of Boland. That is no longer true after the arrival of this 2014 volume Eavan Boland, due to the many issues which the volume presents. It also manages to provide the reader with views that follow the poet’s perspectives on Poetry, the life of the poet and the nation. The six chapters are preceded by an illuminating outline of the main issues to be dealt with in the succeeding pages. One of these issues is Eavan Boland’s presence in the context of Irish writing and beyond it (“inside” and “outside” the Irish contexts, as Allen Randolph puts it). Another of them is the matter of influence in Boland and the voices of American poets in Boland’s attempt to subvert the fixed categories of contemporary poetry. Once again, Allen Randolph’s own World Anglophone Literature perspective will guide the way in which she presents us with her own views about the poet´s proposal. Moreover, the chapters have to do also with an interrogation of the poet’s role and the development of reflections upon matters of gender, nationality, exile and belonging, as well as the “double consciousness of place” to quote Allen Randolph’s words. Together with all the aforementioned topics, there is also the issue of the space and place of women and their social lives, as well as how the poet’s view on both, affects and gets affected by the changes in Irish society over the years. Throughout the book, Allen Randolph adopts Boland’s own view of the intersection between the private and the public worlds. This can be translated into the poet’s own life, her emotions, feelings and thoughts in communication with what went on in her environment, the history of Ireland and the influence that her public life in the USA had upon her private lyricism. In other words, Allen Randolph’s writing is proof that Boland’s ideas on the intermingling of a poetics of place and lyricism is not only plausible, but more than necessary. It is some kind of ultimate device for the poet’s survival in the chaos of displacement(s). In this regard, Allen Randolph states in the introduction that “[a]ny understanding of Boland’s evolution as a poet must also take into account the profound changes in Irish society with which it coincided.” (XVIII)

The first chapter, “The Poetics of Origin”, gives us a biographical account of her prose writing, already establishing the basis for an understanding of the poet’s evolution throughout her publications.  Following this, in “The Nexus of Influence” we come to understand how Boland was initially attached to W.B.Yeats, having her affinity with him confirmed by the experience of displacement on a biographical level, and how this point led Boland to start her own life as a poet as she entered Trinity College. The beginnings of her thoughts upon the nation and belonging are also established in this first chapter. At the same time, one can encounter and understand her dialogue with her colleague, the renowned poet Derek Mahon who, according to Allen Randolph, was “more interested in European literature than Boland was…” (36). In spite of Boland having referred to the greatest influences on her life as being her mother and husband, the writer Kevin Casey, Allen Randolph points to other influences in the life of the poet, such as Sylvia Plath. The chapters evolve as they present Boland’s main literary preoccupations in her production, as highlighted in the third chapter, “From Patria to Matria”. The War Horse is a transitional volume, “her first attempt at a poetics of place, and her first engagement with the Irish political poem.” (47). Allen Randolph thus, defines Boland’s poetics as a “poetics of place” (51) which is able to align private worlds and public realities. Once again, Allen Randolph shows the importance of Boland’s life in Iowa and the writing of In Her Own Image and Night Feed, for example, she discusses the ways in which her time in the USA led the poet to absorb American poets and to include herself in the poetic publications of this other geography. With In Her Own Image, Boland introduces an understanding of the new dimension of the woman, as she herself had become a mother: from observer to participant. This comes in conjunction with the theme of artistic control in Night Feed and the growing interference of ekphrasis and ethical aesthetics in Boland’s poetry, such as the encounter Allen Randolph narrates between the artist Aileen Mackeog and Boland. From here on, the “systemic mistreatment of women in Ireland” is relevant for Boland’s creation.

In this sense, the reader can gradually follow the transition of Boland’s aesthetics from volumes such as In Her Own Image and Night Feed to In a Time of Violence, which comes along with the inevitable conjunction of the national and the feminine worlds, the public sphere and the private one. It also appears in the understanding of how the latter can only be represented along with the former. In the chapter “Out of Myth into History”, Allen Randolph indicates that Boland’s life in the USA led her not only to keep publishing her poems in American journals, but also to be more influenced by North-American poets, such as Sylvia Plath and Adrienne Rich. The question the critic poses is “What was it in the American poet’s poems that so helped the Irish poet?” (99). This concern is ultimately connected with Boland’s importance in the Irish poetic and political scenes, as shown in the last two chapters of the book. In “Changing the Past”, the reader can acknowledge Boland’s role in the debate surrounding the Field Day Anthology, along with other Field Day related and highly relevant issues, such as those of gender, nationhood, and the Irish poetic tradition. Moreover, this chapter signals the importance of the close friendship between Boland and former president of Ireland, Mary Robinson.

Allen Randolph starts the volume by reminding us that the poet proposes a dialogue of the older Boland with the younger one, which clearly appears in Object Lessons, in The Lost Land and in Against Love Poetry. This dialogue of the younger and older poet(s), as seen in the last two chapters, particularly reinforces Boland’s development as a poet who is gradually more concerned with nationhood, motherhood and the maternal body, as representational strategies of reflections upon Ireland’s changes. “Exiles in Our Own Country”, the last chapter of the volume Eavan Boland, gives an account of how A Journey with Two Maps offers a different way of looking into literary “geographies”, to an extent that reaches transnationality and inserts Boland’s poetics into the space of diaspora, and postcolonialism, where identities are dissolving and barriers imperfect. Thus, Boland’s poetics allows for new identities to flourish, giving space to difference in a cosmopolitan world, the diverse Anglophone world, in which both Jody Allen Randolph, as literary critic, and Eavan Boland, as poet, move themselves and create.