by Tim Conley. This text may be archived and redistributed both in electronic form and in hard copy, provided that the author and journal are properly cited and no fee is charged for access. 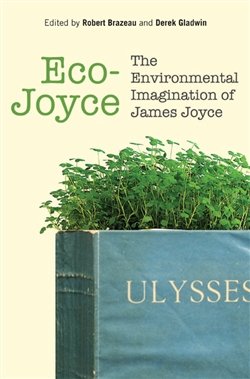 The impetus for an ecocritical study of James Joyce is in some ways obvious and yet cannot be taken for granted. On the one hand, it seems surprising that the widening body of cultural theory aimed at reevaluating what it means to write about “nature” has not been brought to bear on Joyce, at least not in any extended discussion. After all, Joyce is the author of bird girls, flowers of the mountain, and “hitherandthithering waters” (FW 216.04). On the other hand, it should not be taken for granted that a particular mode of discourse, however current or fashionable (and not merely because it is current or fashionable), is suitable and illuminating for every subject. Herein lies the problem in presenting such readings of Joyce: the need to reasonably situate Joyce’s works within ecocriticism for specific and justifiable purposes, though these purposes may be broad and even somewhat open-ended.

The editors” introduction to Eco-Joyce makes heavy weather of this task, basically arguing that because “ecocriticism is now central within contemporary scholarship” (2), Joyce studies ought to get on the bandwagon. Although Joyce’s works tend to be set in urban landscapes, readers are assured, he is nonetheless a keen observer of natural environments. This simple enough proposition is made in the introduction and wearily repeated in too many of the essays, to the point that an otherwise amenable reader might begin to entertain doubts about it. Such redundancies tend to flaw themed collections such as these. While it is not necessarily a problem that two essays share the same subject (both Brandon Kershner and Christine Cusick examine city spaces), the editors might have suggested or imposed strategic constraints to allow the various essayists to get more quickly to their respective focus.

Touchstones, by contrast, can unify. Many of the book’s fourteen essays draw upon Kate Soper’s What is Nature? Culture, Politics and the Non-Human (1995) and Timothy Morton’s Ecology Without Nature: Rethinking Environmental Aesthetics (2007), and very few fail to refer to the works of Lawrence Buell. “Joyce’s fiction,” remarks Garry Leonard in the final (and perspicacious) essay of this collection, “has always been a purifying fire purging various critical approaches of any hyperbole their unexamined assumptions might allow” (246). So it proves here, for the very notion of “environment” is often a struggle to define in essays that range from measuring how Dublin’s Vartry Water Scheme flows through Ulysses to bringing Heidegger to Stephen’s aesthetic theory in A Portrait and considering Joyce as a travel writer. Joyce’s oeuvre is itself an environment of terrific complexity and contradiction, one in which readers discover, as Cheryl Temple Herr writes, “the impossibility of disentangling purity from pollution, humanity from excrement, post-colony from empire, and past from present” (39).

There are plenty of these kinds of insight to savour. In looking closely at the wonderful arboreal nuptials of “Cyclops,” in which Jean Wyse de Neaulan weds Miss Fir Conifer of Pine Valley, Yi-Peng Lai does some impressive newspaper research into the popular debates about afforestation in Ireland (95), and proposes that Vico may play a bigger role in Joyce’s imagining of this episode than has hitherto been noted. Greg Winston reminds us that Leopold Bloom “belongs to a generation that would remember the time before water became directly available inside most middle-class Dublin houses” (144), a fact that helps explain the fulsome answer to the question about such ready flow from the tap in “Ithaca”. Leonard’s essay underscores how modality, not visibility itself, is ineluctable, and thereby suggests that the history of the natural world is inscribed in and by our sensual perceptions, a point that is made all the more urgent by climate change: “These days, we are all Icarus, heading straight for the sun, unless we heed the warning of Ovid’s Dedalus, a warning expressed with elegance and vigour by the best ecocriticism” (248).

It is probably not surprising to find that Finnegans Wake, an overgrown wilderness of a text, comes in for a good deal of attention here. Herr provocatively asks: “Is the Wake an ecologically progressive text?” (47) before going on to highlight the “cosmic confirmation” that Pare Lorentz’s 1937 film The River may have signified for the author of “Anna Livia Plurabelle” (54-56). In one of the most fertile essays in the collection, Erin Walsh proposes an “ecology of the pun” at work in the Wake, a book which “sees mind and world as interchangeable concepts” (74). Though Walsh plausibly contends that word-world correspondence “exceeds metaphor,” I don’t see why it must also preclude “the materiality –the thing-ness– of the word” (76), for what is an ecology if not a configuration of material relations? On just this point Fiona Becket forcefully poses a kind of challenge to ecocriticism, which, in her view, “should acknowledge the importance of a Marxist ecology as part of its theoretical framework” (25).

And just as there are berries worth plucking, there are others (inevitable in these kinds of collections) which seem not quite ripe enough for the jam. Bonnie Kime Scott’s “Joyce, Ecofeminism and the River as Woman” raises the subject(s) of its title but declines to form an argument as such. Eugene O’Brien asks (with Stephen Dedalus) whether excrement can be art, but pays no mind either to the fact that Lynch, with whom Stephen is talking, is a confessed consumer of dung, or to the shitty scribbles of Shem the Penman. We might beg leave to doubt whether the “difficulty” that occurs between Gabriel and Lily in “The Dead” is, as Robert Brazeau breezily says, “purely Gabriel’s creation, of course” (220), and wonder about the knowing sweep of James Fairhall’s assertion that “for Joyce there could have been nothing humourous about Issy/Lucia’s moving away from childhood and biological initiation into womanhood” (237).

Eco-Joyce is a handsome volume, but needless typos and editing oversights bedevil it. The names of several writers, scholars, and even Joyce’s characters are misspelled, among them Michael Begnal, Sean Latham, Friedhelm Rathjen, not to mention somebody called “Virginia Wolfe” (10). The first word of Finnegans Wake is not “riverunn” (83), and there is no Italian word “riverrun” (110; there is “riverran,” as the misquoted Rosa Maria Bosinelli has pointed out). Instances of such pollution aside, Eco-Joyce represents a promising opening of the field.