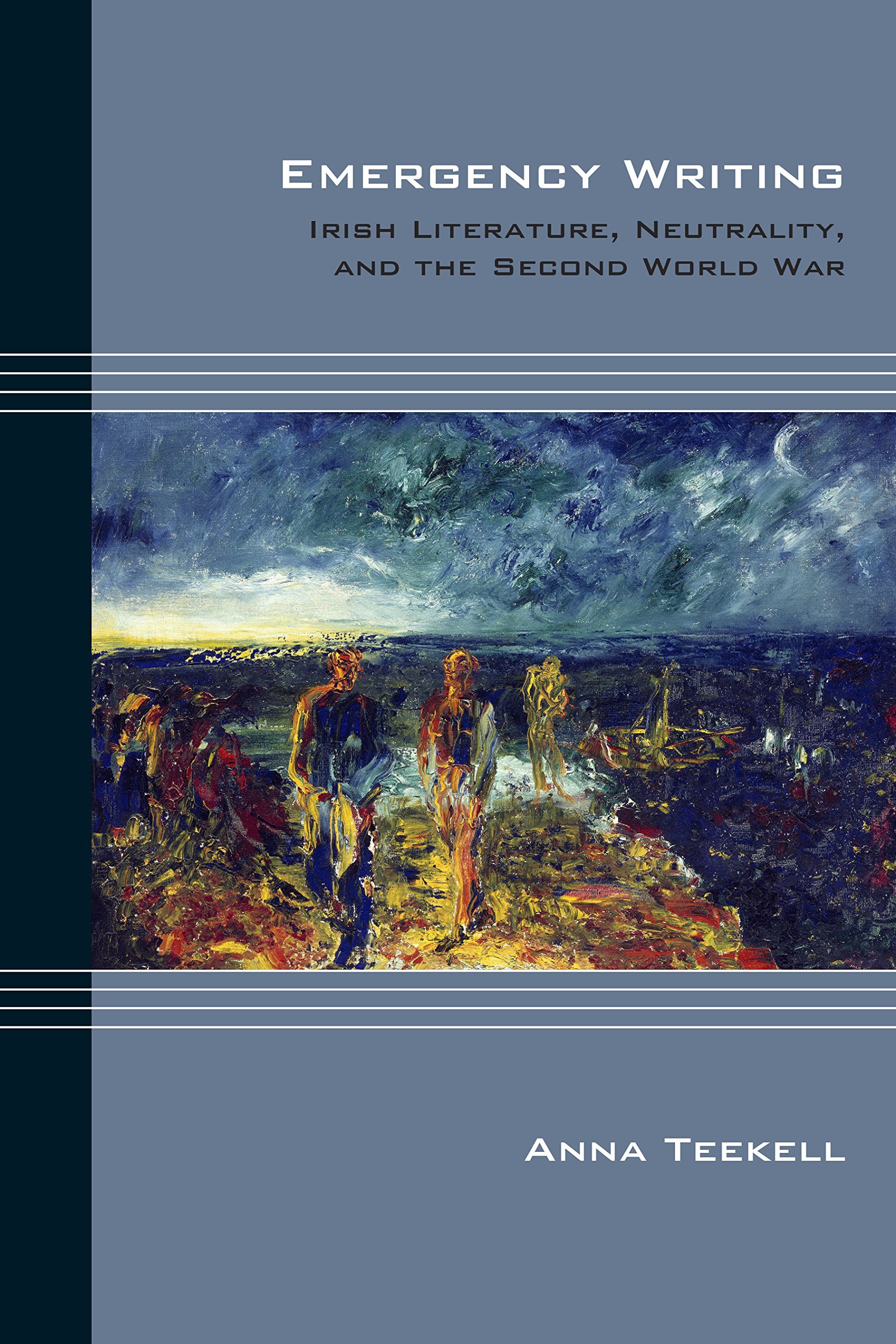 “The Emergency”, an exclusively Irish sobriquet for the Second World War, and was a word used for the euphemistic method of isolating the new Republic from the threat of having its autonomy cut short by international conflict. Language became and remained the chief means of enforcing that neutrality both from within and outside the 26 counties.

Anna Teekell’s book is about that language – about the rhetoric of the Irish government in the first instance, but also about the literary responses to that rhetoric and to Ireland’s position during the war years. In five extremely readable chapters she studies both the language of the poetry and the prose of the period, pairing Patrick Kavanagh and Denis Devlin’s work in one chapter, Samuel Beckett’s and Flann O’Brien’s in another, and devoting a chapter each to Louis MacNeice and Elizabeth Bowen. Other writers, including Sean O’Faolain, Kate O’Brien and Máirtín Ó Cadhain are discussed along the way.

Much of the analysis is conducted through the lens of Ireland’s contested and belated Modernism and its response to governmental manipulation of language and censorship during the war. Teekell asserts that – “Much of the literature of the Emergency is a response to the government’s attempt to legislate aesthetic autonomy, as well as an acknowledgment that if modernist forms are no longer capable of making things new, they are still capable of disrupting dominant cultural narratives”. Another of the book’s strengths is the linking of concepts and material not previously examined in the same contexts. For instance, Chapter I – “The Rhetoric of Irish Neutrality” – begins by examining a 1937 article written by Michael Tierney, a Mayo TD who would become president of University College, Dublin. Tierney argues that the Irish course during the war should be guided by “sacred egoism”, thus linking the concept of neutrality then to a much earlier Sinn Fein anti-conscription stance taken during the Great War. Sacred egoism was in turn linked to both self-sufficiency and the moral high ground. Positioning neutrality thus diminished the chance of the policy being seen as self-serving. Furthermore the use of censorship during wartime could be extended from protecting Ireland from an outside threat, but also threats to its moral fabric, the rubric under which the infamous banning of The Tailor and Ansty was enabled.

The in betweenness (italics mine) which was the condition of Ireland and its writers, and indeed all its inhabitants during the period, found expression in likening the state of affairs to the purgatorial, thus in the following chapter – “Pilgrimage as Poetic Form” – the author centres her discussion on the wartime poetry of Patrick Kavanagh and Denis Devlin, but most specifically on their respective poems on Lough Derg, aka Saint Patrick’s Purgatory, both published in 1942. The pilgrimage, perhaps better known to today’s readers from Seamus Heaney’s well-known serial poem “Station Island”, has been the subject of literary works in Ireland and elsewhere in Catholic Europe for centuries. Twentieth century pilgrim-poets often undertook the rigours of the Lough Derg pilgrimage with an attitude that can be defined as agnostic, or at the very least, “at a tangent” (as the figure of Joyce in Heaney’s poem advises), or by preferring to “tell it slant” as Emily Dickenson famously suggested.

The unease that comes with being in between, neither/nor, or from some of the more negative connotations of neutrality continue to feature in Teekell’s next chapter entitled “The Enemy Within”. This section of the book covers Louis MacNeice’s war poetry and in doing so presents the author with a greater challenge in that this body of work has been examined in the same context time and again in the ensuing decades. Teekell is familiar with, and makes use of, earlier scholarship on the subject from that of Edna Longley to Tom Walker, while also illuminating MacNeice’s relation to the work of Yeats in his critical book The Poetry of W. B Yeats. In what was the first critical book written about Yeats’ work, MacNeice takes particular interest in Yeats’ uneasy, fluctuating but ultimately resolved, intellectual position in relation to both the Great War and the Easter Rising and the Irish Civil war – particularly in his volume The Tower.

Teekell takes issue with Heather Clarke’s contention that MacNeice’s 1938-45 poetry was his most English period, siding instead with Tom Walker’s view that the 40s was perhaps MacNeice’s most Irish decade. More importantly the author argues that MacNeice had a view of neutrality that eschewed any trappings of nationalism. This is territory covered, of course, by Edna Longley who questioned whether the betweenness of MacNeice, and his use of the word “between” in verse of the period indicated separation or being conjoined.

This chapter focuses on Springboard, the volume published in 1944. In the title poem, as in others in the collection, there is awareness of suicide, despair, images of crucifixion. “Conversation” carries with it, at least from the vantage point of the post-war reader, that hint of secrecy or spying. Teekell rightly posits the notion that the whole collection emits a nervousness or tension emblematic of the wartime experience on the home front – the permutation of personality affected by outside events that ordinary people were powerless to control. And, of course, the volume also addresses, if obliquely, the concept of survivor guilt. Its destructive and purgative fire imagery is pervasive, depicting the inferno of London during aerial bombing. By contrast “Neutrality” and the other Irish poems seem nearly bucolic, but they are never easy in themselves, instead asking questions to which there are no easy answers for the poet.

I would have liked Teekell to include an examination of the next volume in MacNeice’s corpus, Holes in the Sky, in which unvarnished and rather despairing references to looting, food queues, distrust and war fatigue in poems written between ’44 and ‘47 paint the home front in unflattering terms which would garner negative reviews in Britain calling called attention to MacNeice’s dubious position as an Irishman to render such judgments.  One such poem, “Corner Seat”, might have segued into the discussion of Elizabeth Bowen’s wartime novel of espionage and treason, The Heat of the Day, discussed in the ensuing chapter. In the novel the central character, Stella, travels by underground grimly imagining the carriages on the return trip being lighter minus the weight of the bodies of people who would be killed in that day’s bombings.

Teekell’s main contribution in the section on Bowen is to link the language of Bowen’s Court (the author’s autobiographical history of her ancestral home in County Cork) and two of her most well known short stories, “Mysterious Kôr” and “The Happy Autumn Fields”, all written in much the same time frame. Here Bowen’s grappling with neutrality takes shape in the form of syntactical inversion and complexity in her adamantly opaque prose. This is writing that does not easily yield its secrets, as Bowen, who managed to travel back and forth to Ireland (and to Bowen’s Court) when such travel was very limited, hid her undertaking to supply the British MOI (Ministry of Information) with reports of attitudes and activities in Ireland. Many in Britain viewed Ireland’s neutrality as being treasonous; and in The Heat of the Day, which takes place in both countries, Bowen is at pains to deconstruct the tension of complex loyalties.

While MacNeice and Bowen spent much of the war in London and many shared experiences, Samuel Beckett and Brian O’Nolan had very different wars – Beckett becoming a member of the French Resistance, and O’Nolan bitterly watching his masterpiece, At Swim-Two-Birds, published in 1939, fade from critical sight. Teekell’s final chapter links the unresolved purgatorial conditions of Beckett’s Watt and O’Nolan/O’Brien’s The Third Policeman, written at the same time, and also contemporary with the Irish language entry, Cré na Cille, by Máirtín Ó Cadhain, written while the author was interned. In the latter the speakers are all dead (interred, not interned) and buried in a Connemara graveyard. Their condition renders them in between the life they have left on earth, but not yet accepting of the afterlife. Thus their torment. Similarly Beckett’s Watt dwells on the title character’s experience of death, and The Third Policeman is set in a similarly nightmarish world from which there is no escape. The purgatorial in most of these examples of wartime writing suggests expiation, but that is in the context of having to endure a long wait for same. In this sense, perhaps, allusions to the readily available and equally liturgical limbo would have been apt.

The Epilogue to Emergency Writing indicates just how far Ireland has come in its view of the country’s wartime neutral stance. Teekell presents a short analysis of Arthur Riordan’s riotous musical in verse, Improbable Frequency, produced by Rough Magic Theatre Company in 2004. Featuring as characters Myles na gCopaleen, John Betjeman and Erwin Schrödinger (an Austrian physicist recently arrived in Ireland who headed De Valera’s Institute for Advanced Studies during the war) interacting in highly unlikely ways in Emergency Dublin, the play includes production numbers which rivalled those in “Springtime for Hitler”, Mel Brooks’ play-within-a-play in The Producers.  A play about the use and misuse of language – one of its central characters is a crossword puzzle expert trying to decode Irish weather forecasts on the radio and their potential for transmitting classified information to Nazi Germany – its final duet between the lovers, English Tristan and Irish Philomena, ends, significantly, on an “unresolved” chord, signalling once more the complexity of writing about neutrality.