by Lucy Collins. This text may be archived and redistributed both in electronic form and in hard copy, provided that the author and journal are properly cited and no fee is charged for access. 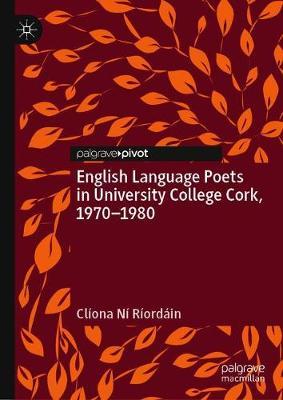 In Eiléan Ní Chuilleanáin’s evocative foreword to English Language Poets in University College Cork, 1970-1980, we gain insight into the rich potential of the generation of poets that emerged in Cork during this decade, taking advantage of Ireland’s rapid modernisation and increasing literary cosmopolitanism. Ní Chuilleanáin’s clear-eyed judgment is especially fitting for a book that explores an important phase in Irish literary history from a unique perspective, and offers an opportunity to examine a group of hitherto neglected poets. Their ties of friendship and literary affinity shed new light on their development as writers, and prompt us to think more deeply about the role of such relationships in the formation of cultural value.

This study is chiefly concerned with the work of seven poets: Greg Delanty, Theo Dorgan, Seán Dunne, Thomas McCarthy, Gerry Murphy, Gregory O’Donoghue, and Maurice Riordan, though it touches on a number of other figures with Cork associations, including Patrick Cotter, Patrick Galvin, John Montague, and Eiléan Ní Chuilleanáin herself. It makes a case for considering these poets as a generation and examines the rich textual heritage of the group, as successors to a Munster tradition and also as poets deeply engaged with other languages and cultures. The comparatively small size of Cork city, together with its maritime history, renders it at once a space of intimacy and creative independence. Ní Ríordáin describes this particular generation – who came to UCC “at the end of the golden Lemass period” – as “carefree and unfettered by vocational concerns” (27). This outlook may also have reflected the experimental freedoms of post-1960s American culture which were a significant influence on these poets.

The opening chapters situate the study within the existing critical landscape, drawing particular attention to the overlapping groups of English- and Irish-language poets that flourished in UCC at this time. The issue of regionalism is explored, and aspects of the social and cultural context of Cork delineated, before Ní Riordáin moves on to offer some biographical detail on her chosen poets and to consider their relationship with the city and with one another. Though introductory, this material is richly suggestive in drawing together a range of diverse circumstances and in considering the many ways in which a future creative life can be heralded. All of these poets arrived in UCC with a sense of purpose as readers and writers, bringing their knowledge and enthusiasm to the collective experience. These energies were reciprocal: the role of the university and its writing community in supporting wider creative developments is potentially a far-reaching one, and more could be made here of its influence on the evolving literary culture of 1970s Ireland.

By choosing a university focus Ní Ríordáin raises important issues about the relationship between the campus and its hinterland, as well as discussing the role of lecturers and curriculum in galvanising discussion and changing the literary landscape in fundamental ways. The wider college context is equally significant: we see how workshops and magazines functioned to bring like-minded students together and to forge a sense of shared identity, if only for a time. Particularly striking here is the role of the teacher outside the classroom, and the importance of dynamic figures such as Seán Lucy and John Montague in supporting student initiatives and introducing new influences into the Cork poetry scene. The interdisciplinary character of these networks is also apparent in the connections between poet John Montague and composer Séan Ó Riada, as well as in the wider cultural networks of Cork that took in the Crawford School of Art and Design, the Cork Choral Festival, and the Irish National Ballet, which was based in the city. Comments on print cultures form an especially welcome dimension of this analysis. Newspapers and magazines offered opportunity and encouragement to these poets at the start of their careers, while bookshops became meeting places, as well as modes of education in themselves. Ireland’s publishing scene had recently experienced a renaissance, with the emergence of Dolmen Press (with which Montague was associated), and of the Cork-based Mercier Press, signalling a commitment to finding readers for Irish work.

Despite the suggestive detail in the initial analysis of Cork’s literary scene, the arrangement of chapters in this book speaks to a deeper engagement with textual concerns than with contextual ones. This is acknowledged – and explained – by the author in her comments on the limited source material available for the study. None of the poets has an archive and a detailed account of student activities is notoriously difficult to capture in retrospect. This is a significant constraint, and has no doubt determined the scope of the book, as well as its emphasis on key thematic and aesthetic concerns, rather than biographical or social analysis. The greater part of the study engages with shared processes and subject matter: translation, the influence of myth and history, and, finally, politics. Nonetheless, the judicious use of interviews – some conducted by the author herself and some drawn from published material – adds texture to her recapturing of this period. The entanglement of Irish-and English-language work is a key aspect of this book’s originality, as it builds on earlier critical work on the INNTI poets and the important developments in Irish language poetry associated with figures such as Michael Davitt, Nuala Ní Dhomhnaill, and Louis de Paor. The study also treats the ways in which the history of the language shadows the work of a number of these poets, examining this in subtle ways and considering too the important influence of other linguistic and cultural force fields. This international context is an important consideration from the start: Ní Ríordáin notes a specific interest in European and American poetry among these poets – what David Wheatley has called a desire the turn “‘home’ into a form of abroad” (49-50). These cross-cultural affinities yielded poetry of subtlety and purpose: the close reading of Seán Dunne’s work, and the influence of Eastern European texts on it, is one of the most rewarding parts of this study.

Perhaps owing to his early death, Dunne’s oeuvre has been unjustly neglected, but this book raises thought-provoking questions concerning our definitions of centre and periphery in the context of the Irish literary tradition. Despite the fact that such issues are often invoked, the extent to which ties of friendship within this college community excluded those at the margins – especially women – is touched on only briefly. Much has been written, by Anne Mulhall and others, about the strong male bonds that created and affirmed literary and publishing cultures for much of the twentieth century in Ireland. This book’s concentration on close textual analysis, and on how shared themes are developed in the work of this group of writers, allows these dynamics to pass largely unremarked. Nonetheless, this book is important for its alertness to the role of writing workshops and fugitive publication as a way of confirming the creative commitment of these young men and of offering them an outlet for their earliest writing.

The relationship between reading, scholarship, and writing emerges strongly in Chapter 3 of this study. This builds on the earlier examination of language and translation and roots these more securely in the treatment of the Irish past. It is at this point in the study that these poets become loosened from their network, and we begin to see them as detached figures with shared interests but unique creative processes. In this chapter, Thomas McCarthy’s work comes to the fore, and Ní Ríordáin’s engagement with translation in Merchant Prince (2005) and The Last Geraldine Officer (2009) is especially illuminating. “The Italian Question”, from the first of these two collections, weaves Italian- and Irish-language references together, drawing on Nuala ní Dhomhnaill’s “Ceist na Teangan” and transforming the INNTI poets into Italian characters. Though McCarthy persistently draws attention to Munster literature and its creative potential for contemporary writers, this study stops short of making a case for a distinctive tradition in the province. Dissenting voices seem more memorable, such as Peter Sirr’s contention that, rugby aside, a Munster identity has little contemporary relevance. Yet this question of regional affinity and attachment to place could be interrogated further, not only because these poets were writing at a time when emigration was on the rise, but because these same issues have become especially pressing today.

The emphasis on close reading that characterises the greater part of this study removes the focus from these social and political concerns but by concentrating on a range of individual poems the book offers instead a deeply rewarding engagement with some of the chosen poets. Extended analysis of the more recent work by McCarthy and Theo Dorgan allows us to form a strong sense of diversity in style and influence and, though this trajectory brings us further from their early Cork association, it offers a truer picture of their unique development as writers. The conclusion is something of a missed opportunity, however. Given the perceptive analysis of less familiar poems, and the clear and purposeful critical voice heard throughout, this book deserves a bolder finish, one that would make greater claims for the early influences on these poets, and the lasting impact of their university experience on such varied creative lives.