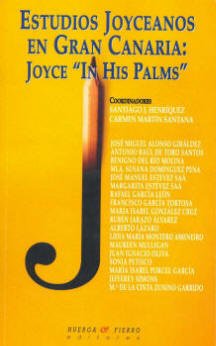 The first translation of James Joyce’s Ulysses into Catalan was made by Joaquim Mallafrè in 1981. Or was it? There exists a previous unpublished version of Joyce’s masterpiece which bears the date of 1966 and lies in a box at the General Archives of the Spanish Administration in Alcalá de Henares. This felicitous discovery was made by Alberto Lázaro and a fascinating account of the genesis of this unknown document is provided in the book of proceedings of the 17th annual meeting of the Spanish James Joyce Association, which took place in Las Palmas de Gran Canaria on 19-22 April 2006.

Alberto Lázaro’s article is dedicated to answer the obvious questions concerning the mysterious translation: Who wrote it? Whose initiative was it? Why was it never published? Joan Francesc Vidal Jové is hence rescued from oblivion in an exemplary work of research, based on a diligent reconstruction of events which took Lázaro on a journey to different archives and libraries, and also counted on the help offered by the translator’s daughter.

Vidal Jové was a politically-involved man of letters who had to go into exile at the beginning of the Civil War. He later returned to Spain and carried out an intense literary activity in the 1950s and 60s as a writer, editor and translator from French and Catalan into Spanish. He translated Ulysses into Catalan from Auguste Morel’s French version and sent the result to his son-in-law George Cheyne, a scholar at Newcastle University, who would revise and compare Vidal Jové’s text with the original in English. According to Alberto Lázaro, Vidal Jové showed a vivid imagination and a discerning intellect in his rendering of Joyce’s novel. Details of the enigmatic publishing house which accepted the manuscript, AHR, are also generously given, as well as a likely explanation of why the book was not finally published. This is, in short, a rare and extraordinary discovery that must be described in glowing terms.

This serves to prove that despite the general misconception over books of proceedings, sometimes little gems can be found in these apparently cursory volumes. Alberto Lázaro’s article is one of them, but the present book abounds in remarkable pieces of criticism. José Miguel Alonso Giráldez writes wisely on the language of frustration in Ulysses. He explores the author’s personal nightmares that might have resulted in the novel’s broken syntax, unfinished sentences and stylistic complexity. Alonso Giráldez delves into the unfulfilled sexuality (voyeurism, masochism, onanism) of the main characters to shed light on the most disturbing features of Joyce’s novel.

Antonio Raúl de Toro Santos is one of the contributors to Joyce In His Palms who also reveals some unknown facts. In his agreeable discussion on Irish literature in Spain in the first half of the 20th century he expands on the reception of writers from the Irish Literary Revival by renown Spanish authors such as Juan Ramón Jiménez or Federico García Lorca. There was, de Toro Santos states, a marked affinity in Irish and Spanish writers with regards to their interest in indigenous peripheral culture in their countries. Juan Ramón Jiménez translated Irish authors such as Synge, AE and Yeats. He recommended Valle-Inclán’s play Divinas Palabras to the director of the Abbey Theatre in Dublin, and Lorca was influenced by Jiménez’s translation of Riders to the Sea. A copy of one volume of Synge’s book, dedicated by Lorca to Galician poet Carlos Martínez-Barbeito is one of the discoveries made by de Toro Santos.

This article is followed by a paper by Benigno del Río, who reads the second chapter ofUlysses, “Nestor”, from a multicultural perspective, having Ezra Pound’s XLV Canto as a point of reference. Benigno del Río captures the colourless and deadening “still-life” quality in some scenes of the chapter caused by the negative influence of money, establishing powerful connections between the devaluation of language and the devaluation of currency.

Susana Domínguez Pena studies Sean O’Faolain’s difficult relationship with his native country and his criticism towards the Catholic Church in his short stories. José Manuel Estévez Saá also sets himself the task of studying short stories, those included in the collection New Dubliners (2005), focusing on Dermot Bolger’s personal homage to Ulysses in the narrative “Martha’s Streets”. Margarita Estévez Saá cleverly addresses the question of Lucia Joyce’s influence on her father when he was writing Finnegans Wake. Carol Loeb Shloss’s polemical biography of this intriguing character, Lucia Joyce. To Dance in the Wake (2004) is regarded to be biased and partial but, Margarita Estévez Saá claims, Shloss might be right in her appreciation of Lucia’s complicity in the composition of her father’s last book. Her presence is unmistakably detected in the book and abundant references indicate that she was part of Joyce’s creative process.

Rafael García León makes use of the metaphor of the world as a stage to search for the terms used by Joyce to link life with theatrical allusions. He discusses Joyce’s ideas on drama and his only incursion into the world of theatre. Francisco García Tortosa’s contribution pays attention to the presence of Jews in Ulysses. There are certain points in common between the Irish writer’s erratic existence and the plight of the Jewish people along the centuries. But being Ulysses, in part, a precise testimony of Dublin’s social structure at the beginning of the 20th century, it is reasonable to ask why did Joyce make one of his main characters a Jew when there were not many of them in Dublin at the time. García Tortosa’s incisive erudition can be discerned throughout his explanation: in order to create the uncharted history of his country, Joyce had to immerse his fiction in the origins of Ireland, on the one hand, and on the pillars of Western civilization, on the other: Rome, Greece and Israel. García Tortosa also traces the possible origins of Leopold and Molly Bloom as part of the migratory movements of Jews from Central and Southern Europe towards the West.

María Isabel González Cruz makes a revision of the sociolinguistic aspects in Dubliners, and Santiago J. Henríquez Jiménez explores the vitality of Irish writing from the genius of Wilde, Yeats, Joyce and Beckett to the energy of modern Irish talents. Rubén Jarazo Álvarez delves into the influence of literature written in English on a paradigmatic figure in Galician letters, Álvaro Cunqueiro. Jarazo Álvarez first exposes how important Galician intellectuals, notably Vicente Risco, defined their culture in connection with other literatures of the Atlantic shores: Irish, Scottish or Welsh. Next, he introduces the work of Álvaro Cunquerio, who incorporated references from the Celtic and English literary universe into his work. Finally, the influence of Lord Dunsany’s fantastic literature on the Galician writer is firmly established.

Lidia María Montero Ameneiro studies in Molly Keane’s novel Two Days in Aragon (1941), the relationship between the members of the Ascendancy living in the Big House of the title with the representative figures of Catholic Ireland: their servants and an Irish rebel in the period after the Anglo-Irish war.

The rest of the articles in the volume are worthy of careful attention too: Maureen Mulligan writes on the importance of music in Joyce’s “The Dead”. Juan Ignacio Oliva examines Joycean echoes in the confessional writing of Anglo-Indian writers Amit Chaudhuri and Shyam Selvadurai. Sonia Petisco considers Molly Bloom’s monologue inUlysses from the perspective of the inner de-centering of the modern subject. María Isabel Porcel García evaluates the influence of Valery Larbaud on Joyce and Jefferey Simons carefully analyzes the stages of writing in the seventh episode of Ulysses, “Aeolus”. María de la Cinta Zunino Garrido’s contribution aptly puts an end to his collection of papers. She traces biblical echoes in Joyce’s book of poems Chamber Music. In her view, there are many similarities between the style and imagery of the Biblical Song of Songs and Joyce’s early book of verse, particularly in relation to the union of lovers. Zunino Garrido efficiently describes the Jesuit cultural background in which Joyce was brought up and provides textual evidence for the connection between the Biblical text and Joyce’s poems. The resemblance between Joyce’s lyrics and St. John of the Cross mystic poems is also established.

Perhaps a final note should be addressed to those responsible for the editing process at the publishing house. It is a matter of regret that such a splendid collection of articles is spoiled by a certain sloppiness: there are too many typos, a thorough revision of punctuation should be made and a systematic homogenization with regards to titles of books and bibliographic references would also be advisable.