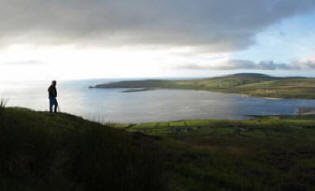 Two Irish documentary films of 2010 deal with community in contrasting ways. Pyjama Girls (Dir. Maya Derrington) is an observational documentary that explores the recent phenomenon of daytime, pyjama-wearing in public by young working class women. The Pipe (Dir. Risteard O’Dohmnaill) deals with a small rural community under threat from the planned construction of a gas pipeline by a large multinational corporation.

These films’ distinct forms and visual styles display two very different approaches to community. The Pipe deploys a conventional style, with elements of a fly-on-the-wall mode and contemporary activist film, to build an argument in support of the Shell to Sea campaign. Pyjama Girls’ formal inventiveness involves a combination of a poetic style, contemporary reality techniques and an interesting use of asynchronous sound to create a piece that is more experimental than expository.

Each constructs community in different ways, and each can be said to create community, both on-screen and in the social world itself, since community is largely created through culture. The idea that community resides in the boundaries between one group of people and another derives from Anthony P. Cohen’s theory of symbolic community, in which he argues that community is based on the symbolic construction of boundaries (Cohen 1985: 12-15). Community, in this view, is a “cluster of symbolic and ideological map references with which the individual is socially oriented”, and community is constructed by distinguishing one group of people from another (1985: 57). Gerard Delanty understands this view of community as pertaining to a “form of consciousness or awareness of reality” in which community “is a symbolically constructed reality” (Delanty 2003: 46) and this consciousness, it can be argued, finds expression in film. The two films, discussed here, can be said to create community through constructing boundaries, either between us and the community in question, or between different communities in the film text. How these two films construct such boundaries is very relevant both to the understanding of community that each film interacts with and to the significance of community in Irish culture.

The opening landscape shots in The Pipe are aerial, sweeping shots, that suggest an ancient natural world and social order and create a timeless vision of what is at stake in the conflict that ensues. Landscape here situates and authenticates the narrative that unfolds, drawing on a cinematic language, in which landscape is both spectacle and metaphor (Lukinbeal 2005), and which allows the film to construct the boundary of this community as flowing into the surrounding countryside. These landscape shots lend this community a timeless natural legitimacy as well as suggesting contemporary eco-politics and its concomitant cultural associations.

In cinema, landscape can also signify freedom: the freedom of wide open spaces set against the confining boundaries of community. This signification can be found in the Hollywood western, for example, where community is seen as a precursor to the rigid constraints of modern society. The Pipe draws heavily on these classic cinematic traditions of landscape. Landscape in this film also suggests the romantic and tourist images of a west of Ireland landscape, in which the west of Ireland is constructed as pre-modern and offered as an escape from modernity. By linking these connotations with the local Rossport community, the film engages a popular understanding of community as a pre-modern arcadia, destroyed by modernity, but which we all strive to regain (Joseph 2002: 1). The Pipe thus poses community as a natural order opposed to the rigid, hierarchical, externally imposed order of society, a view that can also be found to underpin discourses of community (Delanty 2003: 15, 16, 25). It is noteworthy, therefore, that the representatives of the community are shown, in this film, mostly outdoors in an unspoiled landscape. They are constructed as a fundamental element of the natural world and in a symbiotic relationship to nature. One is reminded of iconic images of the west of Ireland such as those in Man of Aran (Robert J. Flaherty, 1934) for example, but instead of battling nature, the local community in The Pipe is constructed as at one with nature. Normal life for this community is framed as a daily life out in the open air, working on the land or the sea. We see them confined when there is conflict, when they are in the midst of a crowd of protesters, or in the village hall at a meeting, so that the global capitalist forces behind the proposed pipeline are seen to force these individuals away from their natural lifestyle.

Pyjama Girls also draws on a discourse of community opposed to society, for example, its main contributor Lauren says: “Society doesn’t give a toss about us so why should we give a toss about society?” But where The Pipe implicates us in community Pyjama Girlsdifferentiates between ‘us’, as society, and ‘them’ as community. It does this by constructing a boundary around the community it depicts.

This film deploys a distinctive poetic realism that draws heavily on the Free Cinema aesthetic of 1950s British Social Realism, even including a fairground scene. The contemplative shots of buildings that punctuate the film are particularly reminiscent of this poetic documentary style. These shots of buildings are formal, from a fixed and static camera, and suggest the objective observer, with the camera as a window onto a distinct world and the viewer holding a privileged voyeuristic position. This voyeuristic stance is reinforced by repeated shots of windows. Whilst we are drawn in to Lauren’s story as it develops, we are also repeatedly reminded of our ‘outside observer’ status through these very formal shots. This is a strategy that emphasises our difference from this community and their ‘otherness’. It serves to construct a distinct boundary between us and them, and in doing so, it can be argued, creates a community of us as viewers. These formal shots of buildings and windows provide reflective moments, the reflection being a cue that we are outside of the action, and outside of the community depicted. They also suggest confinement, a separating confinement that tells us that this world is ultimately inaccessible, across a divide that cannot be bridged. By appearing separately from footage of the girls who are not linked to them in any way, they suggest an objective view of the world that is being observed, and reinforce the separateness of this world from ours by their inclusion in the film. The English subtitling further separates us from the girls observed by the film, signalling our inability to understand them without this mediation.

The urban community that the pyjama-girls inhabit is constructed in Pyjama Girls as physically bounded, confined within flat complexes and housing estates that are only amenable via public transport, which can, as the sequence of the girls on the bus testifies, be fraught with its own danger. In the film, the city is not an open space but a series of distinct and separate bounded spaces. Like Conn Holohan’s argument about cinematic portrayals of Dublin, Pyjama Girls displays “a certain disregard for the realities of spatial relations within the city” (Holohan 2010: 107), by conflating Ballyfermot with a number of other ‘disadvantaged’ areas of Dublin. For example the social housing apartments or ‘flats’ where we see  the girls, and which feature in many of the reflective shots discussed above, are actually within the city itself, but in the film the impression is given that they are in the peripheral suburb of Ballyfermot. This conflation allows Ballyfermot to be presented as a physically bounded, closed off space, rather than as the suburban sprawl it actually is. Thus a distinct boundary is constructed around the community of pyjama-wearing girls it depicts, when in fact pyjama-wearing among girls is a city-wide, even a country-wide, phenomenon.  ((See for example Claire McNeilly. “Tesco Bans Shopping in Pyjamas.” Belfast Telegraph [Online]. Friday 29 January 2010.))

Thus Pyjama Girls separates us from the community observed, and makes a distinction between us and them. We get the impression of a barrier that cannot be crossed and that the filmmaker has given us a privileged, once-in-a-lifetime, opportunity to see over that barrier. The Pipe, on the other hand, suggests that the boundary between us and the community can be crossed. It intimates that the viewer too has access to this community and its natural heritage, and that such access might also be under threat from the same capitalist forces that threaten both countryside and community.

As Cohen (1985: 58) remarks, the constructed boundaries between communities “arerelational rather than absolute; that is, they mark the community in relation to other communities.” Violence is an important element in the construction of such boundaries (Delanty 2003: 47-48) and conflict and violence is at the heart of both films discussed here. Where The Pipe shows the conflict of community against state, or society, and the internal conflicts that this has given rise to, Pyjama Girls defines a community of pyjama-wearing girls in opposition to another community of girls they call “Babos”, with violence involved in this boundary construction. The Pipe’s scene of a group of hired-in security guards lined up against the local community, constructs a stark contrast between ‘locals’ and outsiders. A contrast which emphasises Shell’s global capitalist ethic. The Gardai, on the other hand are shown as being from the local community. This construction of the police force as made up of local individuals pitted against those locals opposed to the pipeline, serves to reinforce an opposition between community and society in the film and constructs society as a threat to community.

As we have seen, these films create community in different ways through their construction of boundaries. This can be found to correspond with the urban/rural divide that is said to inflect Irish national cinema (McLoone 2000: 18-20). It can, alternatively, be related to the two films’ very different production contexts. Pyjama Girls is informed by an experimental and artist cinema aesthetic. Its production company Still Films, known for experimental work, has associations with the Darklight Festival, an important contribution to artist and experimental film in Ireland. Indeed, Pyjama Girls director, Maya Derrington, sees herself as outside of the community she observes:

I used to walk past Charlemont Street flats and wonder about the contrast between me walking to work in TV and these snippets of life that I would catch. I wanted to step over this boundary that frightened me. I wanted them to think of me as a person also (Clarke 2010).

The Pipe has a very different background. Director, Risteard O’Dohmnaill, has family connections to this community and was living locally when he happened across the protests, began filming them and over six years built up footage of the anti-pipeline movement.1 His documentary weds exposition and observation, building up an argument that supports resistance to the pipeline without a narrative voiceover. During the conflicts, the camera gets right inside the action, showing us what is happening from a point of view within the community through its shaky, hand-held view of the protests and low angles of conflicts at the meetings. Whilst this film is not a propaganda piece from the protesters themselves it is informed by an activist and social movement cinema that engages community in the pursuit of social change.

Thus it might be argued that in cinema, community boundaries are constructed according to the particular perspectives filmmakers operate from. Those films that emanate from within a community may engage with a particular way of symbolically constructing community that differs from that constructed from a position outside of the community.

Joseph, Miranda. 2002. Against the Romance of Community. Minneapolis: University of Minnesota Press.