by George Bornstein. This text may be archived and redistributed both in electronic form and in hard copy, provided that the author and journal are properly cited and no fee is charged for access. 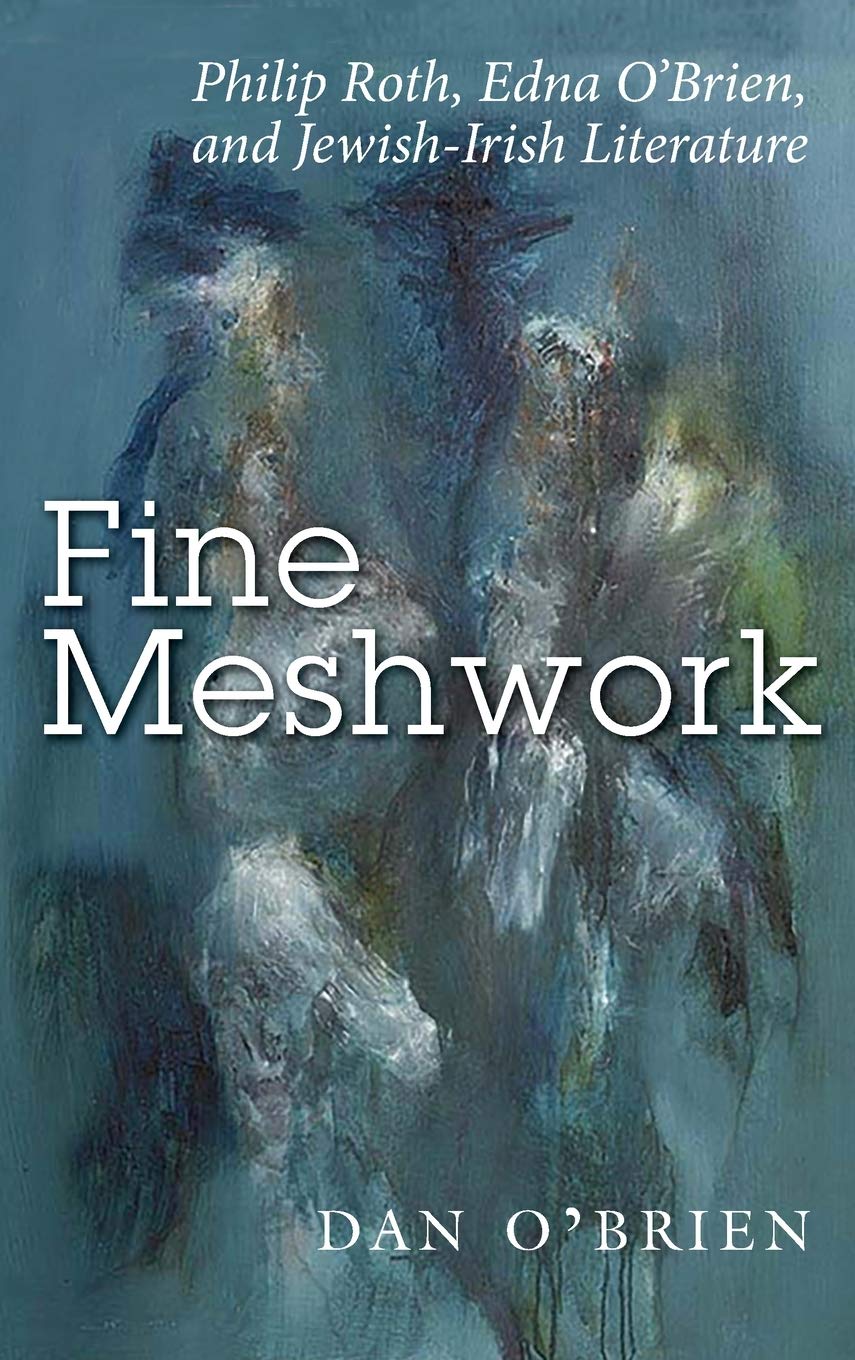 “It is an epic of two races (Israel-Ireland)”, wrote Joyce to his translator Carlo Linati in 1920, “and at the same time the cycle of the human body as well as a little story of a day (life)”. It was not a stray comment, but rather the result of a lifelong search for parallels between Irish and Jewish material. Something similar could be said for the work of Edna O’Brien, who quotes the letter to Linati in her own 1999 monograph James Joyce, in the Penguin Lives series. The American novelist Philip Roth and O’Brien first met in the late 1960s through their mutual English publisher Jonathan Cape. They shared a wariness toward universal “truths”, and distrusted ideologies and propaganda, which often put them at odds with received notions, including those of nations and ideologies. “What race or what language can … boast of being pure today?” asked Joyce in a passage also quoted by O’Brien. After a loosely biographical chapter confronting notions about how the two writers undermine false cultural notions of “purity”, in Fine Meshwork, Dan O’Brien proceeds through their works in roughly chronological order, addressing first moral purity, then gendered identity, followed by their views on upward mobility through social access, William Faulkner’s contention that history and the past are “never dead”, and, finally the mass displacements of the twentieth and twenty-first centuries. That’s a lot of ground to cover, and for the most part Dan O’Brien here covers it well.

The bulk of the book marches steadily and often illuminatingly through its chapters, pointing towards its persistent questioning of false notions of purity, whether satire of Jewish hegemony in Roth’s Goodbye, Columbus (1959), of O’Brien’s opening trilogy The Country Girls (1960) followed by The Lonely Girl (1962) and the ironically titled Girls in Their Married Bliss two years after that, with its demolition of Irish notions of sexual or historical purity. That and her next two volumes were banned by the Irish Censorship Board in a paroxysm of political correctness. She also met a number of Jewish writers in America, including Joseph Heller and. J. D. Salinger. Brendan Behan wittily quipped that “Other people have a nationality. The Irish and Jews have a psychosis”. O’Brien also met the young Jewish writer Erica Jong, then known as the author of Fear of Flying (1973), who in a letter wrote her that “you and I, and certain other women writers, are daring to write about the female experience in a perspective that has never been used before”.

In 1962 the Archbishop of Dublin, John Charles McQuaid, wrote to then justice minister Charles Haughey to denounce the publication of O’Brien’s Country Girls trilogy as “a smear on Irish womanhood”. A similar charge had been made against Roth’s Goodbye, Columbus in the United States and Ireland in regard to its treatment of premarital sex and contraception. Both works were judged to have transgressed against proper group boundaries. So, too, were the next comparable novels, Roth’s Portnoy’s Complaint and O’Brien’s Night, both of which question not only the allure of sex but also the enticements of nationalism. “Shame and shame and shame and shame – every place I turn something else to be ashamed of”, confesses Portnoy at one point. Despite his ethnic conditioning against gentiles, the growing Portnoy is fascinated by all things non-Jewish, especially the women and particularly if they are Irish Catholic. When he visits Israel for the first time he muses delightedly, “Here we’re the WASPs!” He flirts with wedding the Jewish kibbutznik Naomi and wonders why he doesn’t marry her and stay. In that way Roth manages to mock both the idealistic portrayal of American Jews and its then unquestioning support of Israel.

O’Brien wrestles with similar issues in Night, which, like her Vogue essay, “The Artist and his Country” (1971), echoes the earlier questions in Roth’s essay a decade earlier, “Writing American Fiction”, which argues that Night is “intimately engaged with ‘the Irish Question,’ looking as it does at the Irish in England, the English in Ireland, power relations, violence, xenophobia, and nationalism. [O’Brien] discreetly probes the anguished position of the Southern Irish writer and citizen, balancing dismay over IRA murders with a deeply rooted affiliation with downtrodden Northern Catholics”. The protagonist Mary Hooligan exemplifies that split; the Free State’s oppressive structures continue the patriarchal and exclusionary ones of pre-Independence Ireland along with O’Brien’s particular animus toward men who reenact the country’s subjugated history of Irish women. Both novels warn of the dangers of the confluence of masculinism and nationalism.

Roth’s 1981 novel Zuckerman Unbound adds to his usual focus on the complex analysis of race by foregrounding the character of Caesara, called “the very heart of Ireland”. As the niece of Noah in the Bible, the original “Cessair” in Irish myth marks the continuity between Jewish and Irish identities in the Book of Invasions and elsewhere, tracing as it does the imaginary migrations of the Tuatha De Danann and the Milesians into Ireland and thus providing yet another example against notions of Irish racial purity, followed as they were by Vikings, Normans, English, Scottish, French Huguenots, and Lithuanian Jews, among others. Zuckerman goes on to have a brief affair with Caesara after she becomes a movie star in Hollywood and just before he introduces a quite different Jewish Newarker, the embittered Alvin Pepler, a farcical embodiment of Jewish victimhood in the New World. Pepler ends his denunciation of the Black writer LeRoi Jones (“what he writes is not literature. In my estimation it’s black propaganda”) with racially charged hatred (“Newark is a nigger with a knife! Newark is a whore with the syph!”). Zuckerman himself comes perilously close to Pepler’s view when he asks Caesarea the seemingly innocent question, “How did you get into all this?” with the acidic reply “‘All this, ‘meaning what?’ She said sharply. ‘Showbiz? Masochism? Whoredom? How did I get into all this?’ You sound like a man in bed with a prostitute”.

Both O’Brien and Roth adopt Faulkner’s formulation in Requiem for a Nun that “The past is never done. It’s not even past” in their trilogies of the 1990s particularly in O’Brien’s The House of Splendid Isolation (1994) and Roth’s American Pastoral (1997). Back in 1984 O’Brien had declared that “Any small, claustrophobic ingrown community resembles another. The passion and ignorance of the Deep South of America and the West of Ireland are the same”. The House of Splendid Isolation is narrated by Josie O’Meara, an elderly Irishwoman born at the turn of the last century who emigrates to America during the Irish War of Independence but then returns to Ireland and marries into the rising Catholic large-farmer class only to find that her new husband is alcoholic and violent. She manages a then-illegal abortion, and consummates a late-life affair with a visiting priest after which James beats her into a brief madness. Following her lapse into sanity, James allows an arms dump on his land and is killed by the Gardai. McGreevy, a Provo assassin on the run, turns out to be an intelligent man of principles. O’Brien invokes Faulkner’s Quentin Thompson as an analogue to show how current and past troubles can mask horrific deeds.

Similar questionings mark Roth’s otherwise disparate American Pastoral, with its ambiguous hero Seymour (“Swede”) Lvov hero, a former schoolmate and athletic star who has inherited a large glove manufacturing business from his uneducated Jewish immigrant father and moved to the well-to-do Jewish suburb of Old Rimrock with his Irish Catholic wife Dawn. Swede’s inability to question anything about his own success in America leaves him blind to the subjugation of women and African Americans to explore how Jews became white in America by using the Irish as a model. His second wife also appears to be a non-Jew, implying unwillingness to query the white male privilege by which he lives. The novel closes with a garden party thrown by the Lvovs in 1973. There Swede re-encounters the daughter whom he finds has killed three more people in service of her ”revolution”. Dawn takes an opposite attitude. Now Blacks were making the same migration from Newark as the Jews.

The Plot Against America (2004) is a muted post-Orwellian novel that offers an alternative history set in a reimagined 1940s America where a young Roth and his lower middle-class Jewish family confront a society in which fascist forces have come to power under the presidency of Charles Lindbergh and the tirades of Father Coughlin, the anti-Semitic Detroit priest and his Christian Front clubs. Lindbergh founds the benignly-named Office of American Absorption led by the equally anti-Semitic automotive baron Henry Ford, who subsidized publication of the four-volume The International Jew: the World’s Foremost Problem (1920-22) and the United States publication of The Protocols of the Elders of Zion, a 1903 Russian anti-Jewish forgery in 1903. An aunt’s husband, Rabbi Bengelsdorf, who succeeds Ford as head of the Office of American Absorption, offers little improvement, while Roth depicts the principled and often courageous if also hot-headed broadcaster and journalist Walter Winchell as “a Jew of the coarsest type”. Roth went on to deny obvious parallels today between his alternative history and current politics: “It is easier to comprehend the election of an imaginary President like Charles Lindbergh than an actual President like Donald Trump”.

O’Brien sent draft chapters of her 2015 novel The Little Red Chairs to Roth as she wrote them, a sign of their growing intimacy. The enigmatic title refers to the beleaguered Yugoslavian city’s commemoration on April 6. 2012, to set out 11,541 red chairs on the high street, one for every Sarajevan killed during the 1425 days of siege, together with 643 small chairs, one for each child killed as well. The novel tells the story of Dr. Vladimir Dragan who arrives at the West of Ireland village of Cloonoila. There he begins an affair with the childless protagonist Fidelma. It turns out that he is hiding from the consequences of his role in Yugoslav war crimes, for which he is arrested and then imprisoned in The Hague. Meanwhile Fidelma suffers a brutal rape by three of Dragan’s former henchmen who betray him for a reward. She moves to London where she finds work as a cleaner and comfort in Dragan’s later trial for war crimes. The novel suggests that hybrid identities, cultures and ideas can ameliorate the excesses of berserk patriotism.

Dan O’Brien generally handles the complex ideas of Fine Meshwork well though occasionally hides behind efforts to pull his punches. For example, in chapter four, “A Harp in the Hallway”, he writes that “A Jewish version of Horatio Alger has become a point of entry for some mainstream Jewish organizations to adopt a racist attitude against African Americans especially and to oppose affirmative action for people of color” without giving a single example in his main text (and only a brief mention in the notes). A few lines later he adds in light of the shifting scales, “The novel’s closing scene can be reread in light of the shifting scale of racial Otherness”, again without an example. Of course, many things can be read as something else, but one wishes for one or two more instances here. Again, the very next chapter informs us that Thomas “Sutpen’s insolvency following the Civil War can be taken as a moral judgment on the moral bankruptcy of the plantation class”, again without any argument why it should be taken that way. Despite such occasional lapses, Fine Meshwork remains a strong first book by a promising young scholar.